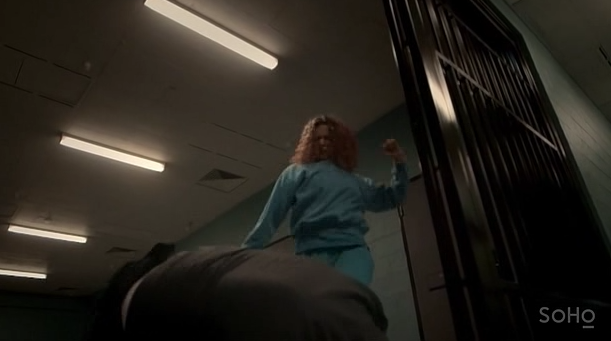 In what I suppose is intended to be lighter subject matter, Boomer finally gets her long-awaited conjugal this week, with Dez (sp?), who turns out to be a human drain clog.

Doreen, meanwhile, is still locked out of conjugal visits and is furious at Bea’s refusal to take up the issue as her cause celebre. And Dor, my girlfriend and I are apart for the summer, so I feel your pain, but it’s just not the most important thing going on right now. Doreen takes her troubles to Joan, who (unfortunately) gives her excellent advice. She then goes to Vera to be like “So yeah I got pregnant, but you did leave me in a garden shed full of male inmates, so who exactly is to blame for that, eh?” Vera is impressed in spite of herself. And as much as I want Doreen to get her sexual healing, the fact that she had to cozy up to Ferguson to do it makes this the Official First Time I Have Ever Been Annoyed With Doreen.

In further romantic news, Bea and Allie continue their little courtship dance, which has gone from being “deliciously drawn out” to “disappointingly stalled out.” I mean, when Allie’s first interaction with Bea was to try and go down on her in the shower, it’s a little hard to believe she wouldn’t be more bold in pursuing their attraction. There is a moment of hope when Allie catches Bea talking to Will (warning him about the rumor that he raped Joan) and Bea rushes away from Will to be at Allie’s side. She’s worried Kaz will find out she’s talking to a guard, but is she also afraid Allie will be needlessly jealous? Their faces certainly get closer than is strictly necessary to administer threats.

And when Allie asks what is really going on between Bea and Will, Bea reminds us that Will went to see Debbie’s body when she died, for which Bea will forever be grateful. Is that all it is, though? I’ve always seen Bea and Will as being ultimately inevitable, and it never seriously occurred to me that Bea would explore her sexuality with a woman. Now that the opportunity has presented itself, of course I want it to happen, but I still feel like the rug could be pulled out from under us at any second. WHICH IS WHY IT IS IMPERATIVE THAT ALLIE AND BEA KISS AS SOON AS POSSIBLE. WE NEED THIS SHIT TO GO CANONICAL BEFORE ANYONE ELSE DIES.

Oh, and Maxine has cancer, which we’ve all known for a while but which is still very sad. Updates on that story as it develops.

This episode gives us one of our infamous strip search scenes, in which Vera becomes the last to know about Joan’s assault. These scenes could be old hat by now, but the show always tries to include some new twist on the old humiliation. In this case, Kate Atkinson’s face does so much work of selling Vera’s horror, and Pamela Rabe manages to find a smug joy in Joan’s refusal to admit she’s suffered from anything but a bad fall.OH YEAH I’VE TAKEN PLENTY OF FALLS LIKE THAT. IN TOMB RAIDER.

Although personally I think Joan is starting to oversell her “poor weak victim” routine.

Bridget makes a lamentably brief appearance to talk to Joan, and we learn (both via Joan’s needling and Bridget’s haggard expression) that she and Franky haven’t seen each other for a while.IT’S FINE BOUNDARIES ARE FINE I AM DEFINITELY NOT DYING OF ABSTINENCE.

Next, the Red Right Hand puts its plan into place to punish Will. But Allie, out of loyalty to Bea, can’t go through with it. She risks her standing with Kaz to warn Bea, and boy, every time they talk Allie’s face just falls deeper and deeper into hopeless love AND I AM THERE FOR IT.

Bea springs into action and steals Ms. Myles’ radio to warn Will. He still gets attacked, but the extra moments of warning may have saved his life (or at least his testicles).

Unfortunately, this act of kindness earns Bea the title of Screw-Lover, which is the kiss of death in prison hierarchy. She’s counting on getting slotted to restore her street cred and give her a little vacation from all the drama, but all Will Jackson does is thank her! In front of everyone! And then she realizes it: she’s played right into Joan’s hands. The former governor now has more credibility as a voice for change than the actual Top Dog.

And that’s when Bea knows she has to do something drastic. Like, real drastic. “Curb stomp her buddy” drastic.

Bea is led to solitary confinement in triumph, although Allie does not kiss her on the mouth on the way there, which is disappointing.

Next week: With the Top Dog out of the game, all hell breaks loose. (UNTIL ALLIE RESCUES HER WITH TRUE LOVE’S KISS, PROBABLY. YOU CAN’T JUST DANGLE THIS IN FRONT OF US FOREVER, SHOW. IT’S CRUEL.)

p.s. I encourage you all to do a Wentworth–Game of Thrones matchup in the comments. Bea is Dany, obviously, and I feel like Franky is Arya, but I want to do EVERYONE.