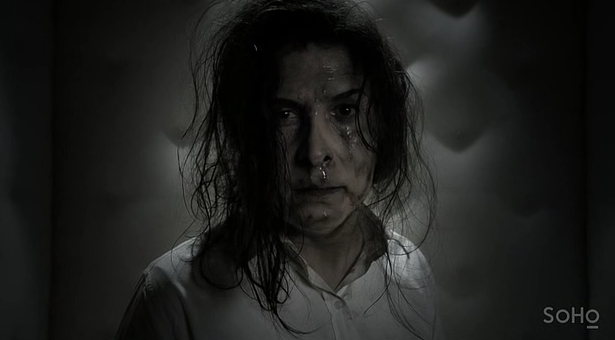 Hey loves: we don’t really do trigger warnings for this show, but it’s a particularly rough one this week, so just make sure you’re in an okay head space before proceeding. Make some tea or something.

It wasn’t until after I finished this episode and pulled up a Word document that I realized something: Franky Doyle was not in this episode. Normally, when the queer character whose presence justifies recaps sits out a week, it means I can just gloss over the events of an episode. But not this week, because even though our little stray cat doesn’t make an appearance, this is a Very Gay Episode. And I mean that in ways both good and bad. I had to pause the video several times this week just to gleefully hyperventilate at Allie and Bea’s interactions, but we also went to a very dark place when the show did what it’s been threatening to do since season one and made us witness to a gang rape.

We begin with Joan Ferguson finally emerging from solitary confinement, clad in teal from head to toe.

But on her very first walk through a yard, she is spat on (which unfortunately calls attention to the appalling amount of foundation and blush they put on her face for some reason.)

No one is particularly thrilled with the former governor taking her place among the inmates, but the women who are most inconvenienced by the situation are Vera and Bea, who are tasked with the difficult job of keeping Joan alive.

No one knows why Joan wants to be out in gen pop, since she’s all too aware that nearly everyone wants her dead. It’s become increasingly difficult for anyone to tell when she is being crazy like a fox or just plain crazy. Bridget wonders aloud why her psychiatrist thought she was sane enough to go to prison in the first place. (Bridget appears for only thirty seconds, long enough to reassure us that she’s fine and Franky and she had good sex last night, but didn’t sleep over, because they are working on their boundaries.) And in the privacy of her own mind, Joan starts to slip into flashbacks of her time at the mental hospital.

It seems like whatever is happening in The Freak’s head; it’s out of her control. But when it comes to her life in prison, she’s merely feigning helplessness. Case in point: she is placed in the same cell block as Kaz and Allie (not ideal but Vera was short on better options) and immediately starts trying to win over the Red Right Hand by telling Kaz just how much she admires her. And while Kaz has heard a little too much about Joan’s tenure as governor to trust her completely, she is a narcissist and therefore very vulnerable to flattery.