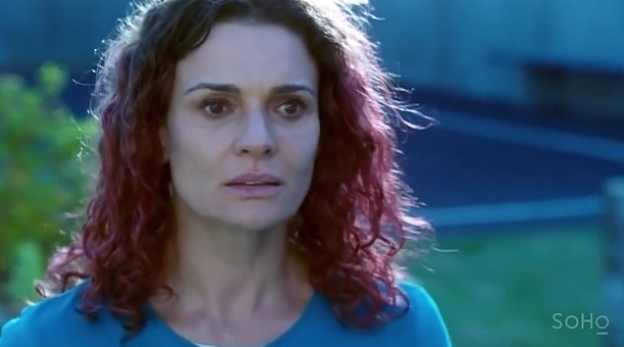 First of all: I don’t know. I don’t know if I’ll be writing a eulogy for Bea or Allie next week, and I don’t know because Danielle Cormack has refused to tell me (though she did have the patience of a saint when I frantically DMed her in the middle of the night saying “DO YOU DIE??”).

Second of all, I hope you’ll bear with me as we continue our tradition of my Wentworth recaps doubling as a travel diary for my summer vacation. When last we spoke, I was flying home from New Orleans. This week I’m at a music festival in upstate New York with my family, dancing in the same tents I have danced in since I was a child. (This was the year I learned how to dance, incidentally, after a lifetime of thinking I would never find the rhythm.) Being surrounded by so much familiarity (though, like all things associated with family, it is never a simple familiarity; it is always complicated, always in flux, a bit like my relationship to this show) makes me think deeply about who I am, my essential qualities.

One thing about me is this: I have always been drawn to the bittersweet. It’s the one thing that ties together all the types of writing I do, from fiction to criticism. The first song I ever wrote, as a third-grader, was called “Smiling Through Your Tears” (and appallingly rhymed “life” with “strife”). For me, extreme joy has always been inseparable with the sadness of knowing that the joy will end: a pre-nostalgia, if you will. And extreme sadness also has its own sort of joy, of a heart being pushed to the limits of the human experience. I think that is why this season of Wentworth has touched me in a place so much deeper than most television ever gets: it’s the most bittersweet thing I’ve ever watched.

“Trust,” intones Joan as the episode begins, “often it can be misplaced.” She’s warning us as much as herself. You can trust an addict to use. You can trust a TV show to break your heart. And you can trust Joan Motherfucking Ferguson to have an evidence cache hiding in every room of her home. She directs Jianna’s son to open an upstairs vent (not the downstairs one, that’s just full of axe handles and goldfish bones) to find a comprehensive (and cherry picked) account of all the ways Will Jackson is a Bad Person.

Yes, Will Jackson is the author of all the world’s ills, according to Joan. (You know, I had briefly forgotten she had unfinished business with Will, since she’s been so busy with Bea all season!) And all Shane needs to do to mend this broken planet is kill Will. Makes perfect sense.

HOWEVER, Shane also finds pictures of himself throughout childhood, which means, of course, that Joan has been stalking him his entire life. It fails to occur to Joan that Shane might not be thrilled to learn that his fairy godmother spied on his soccer practices but failed to rescue him from the foster system. So he storms out of the prison, leaving Joan (for the time being) with only Jake as her instrument.

Sidebar: For whatever reason, this is one of those episodes where the show urgently reminds us that Joan suffers from OCD as well as sociopathy. And while I do appreciate seeing the way she perceives other people—as an incoherent roar that she can neither tune out nor understand—I object to her Occasional Mental Illness. You can’t be giving mouth-to-mouth on the floor of the showers one week and scrubbing a telephone with bleach the next.