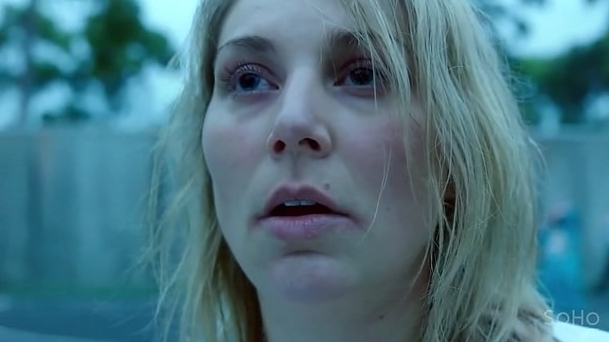 I am writing this in an airplane flying high over the Deep South on the day after my birthday. My first tattoo (acquired yesterday) is burning into my side and I am nursing the kind of hangover only two weeks in New Orleans with your best friends can give you. I am worn out and hoarse, and I ache all over, and yet I’m filled with a profound joy and gratitude to be all these things. So this episode of Wentworth fits me like one of Joan’s gloves.

Naturally, we begin with Allie, since the show knows that all any of us have done since last week is worry over her. And we were right to do so, because Allie is lost.

Since losing Bea and getting back on heroin, the Allie we knew—kind and patient, a walking silver lining—has all but disappeared. This Allie stumbles around the yard with her hair disheveled and face slack, trying to make out with every woman, either to score more drugs or just to make sure everyone (Bea) has gotten the message that she is NOT DOING WELL. Watching her throw herself at other women (who don’t even want her; it’s that pathetic) is the second hardest thing about this episode. The first hardest thing is watching Bea watch Allie.

And ain’t that just the thing about love. You take the tender, delicate petals of your heart and open them up to the world, and nine times out of ten you do it just in time for a hailstorm. So much of what is terrifying about falling in love is placing your happiness within the finite, fragile confines of another person and hoping they don’t die in a car wreck or get destroyed by their bad habits. Right now, Bea is watching her happiness, her love stumble around the prison yard, giving her kisses to strangers. And when Allie gets really nasty, when she turns to Bea and says, “Pat my pussy, mama,” Bea’s face looks like the plot of Ole Yeller.

Bea begs Kaz to help Allie get clean, orders the dealers not to sell to her, and generally spends the whole episode anxiously trying to keep her out of trouble. But what she won’t do is take her in her arms and kiss her forehead and tell her everything is going to be all right. And that, of course, is because of Debbie.

One thing that I enjoy about the Ballie dynamic is the way that, like Carol (the other best piece of queer media in recent memory), it acknowledges the echoes of mother and daughter that play out in the romance between an older and younger woman, but it does so without making it, you know, squishy. Bea sketches Allie’s face like she once sketched Debbie’s. Bea talks about Debbie to Allie, for the first time in ages. And Bea is terrified, beyond anything else, that she will fail to save Allie from heroin in the same way she failed to save Debbie. (Remember that episode? Man, we have been through some shit, people.) So she does what a lot of people (myself included) do when afraid of failure, which is not to try at all.