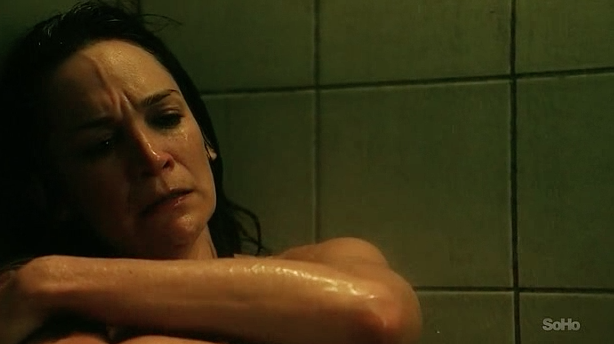 Well, that was Wentworth at its finest—by which I mean I watched the whole episode with one hand covering my eyes, repeating ,“No no no my poor baby” at the screen. (I’m rereading that sentence and realizing that it might sound like something other than a compliment, but seriously, any show that can provoke that intense a reaction in a viewer is doing good work.) The episode was so strong because it had the one-two punch of great TV drama: an interior arc that was compelling and intense, while simultaneously revealing bigger truths about the character at its center. And that character, of course, is Franky, whom I freely admit is my favorite part of this show, except for those brief moments when something nice happens to Doreen and we get to see her smile. Someone said in the comments last week that I focus on Franky at the expense of Bea, and there might be a grain of truth there. I do love Bea, and Danielle Cormack’s fierce yet subtle performance, but I just find it easier to latch on to the Artful Dodger than Oliver.

Speaking of our rat-tailed little urchin, when last we left her she was in very dire straits. The old chicken butt heroin pipeline dried up when Bea got serious about her drug-free prison policy. Franky avoided the raid, but lost her two closest allies when Jodie got framed with the drugs and sent to solitary, and Boomer got her hands steam-cleaned for beating up Liz. Isolated and desperate, Franky was left to fend off Cindy Lou and her army of goths and Billie the predatory lesbian and her army of that one chick who looks like Rebel Wilson.

This week we pick up with Franky maintaining her boob-training regimen in the exercise yard. One of her clients warns her that the women are getting restless with no drugs and no money, and sure enough, The Cindy Lou-Whos show up and tell Franky that either she gets them the gear or she dies. One thing I have never understood about pop culture criminals is that they always seem just as eager to inflict violence as to get a return on their investment. That is certainly true of the Lou-Whos, who allot Franky one hour to get them their stuff.

Franky hears that Billie has scored some dope and tries to buy it off her. And part of the idea behind increased gay representation is that some of your characters are going to be heroes and some are going to be victims and some are going to be gross mean people who make your skin crawl. Just like in real life. Billie is that last type of person and she demands that Franky pay her triple the normal rate for the drugs—or she could buy them with sexual favors.

Franky chooses the expensive but fully clothed option, and goes to Boomer to get her secret stash of money. Poor Boomer is still upset about her mangled hands and refuses to give up the money’s location. It is adorable to watch her try and fail miserably to harden her heart against Franky, though. It takes Fanny Bandit about five seconds of searching Boomer’s cell to find her money taped behind a pinup of Boomer’s idea of a beefcake. As soon as the money is in her hand, Billie and her posse roll up and take it  Franky is like, “Where’s my drugs?” And Billie is like, “In my pants. Care to go looking for them?”  And Franky is like, “Still no.”

Rapidly running out of options, Franky’s next stop is Kim. She places a phone call, begging her old fuck buddy to come to the prison with some money. Actually, first she commands Kim to do it, but then remembers she can’t boss her around while they’re on opposite sides on the prison walls so she switches to a softer tactic. When Kim shows up, she wants to cuddle but Franky is all business.

Unfortunately, Kim could only manage to scrape together eighty bucks (I always forget that Aussies say “bucks” and not “quid”) which couldn’t buy enough dope to placate a toddler.

In another corner of the visitation room, Liz gets another visit from her daughter, Sophia. Sophia is understandably confused about how and why her mother went from being a knife-wielding vigilante to back in prison. And more importantly, why she never once wrote her kids a letter in all the years she was away. Liz offers some pretty lame excuses about how the kids’ father and stepmother warned her to stay away, but she’s far more concerned with the alcohol she smells on her daughter’s breath. Liz tearfully expresses the sentiment that even if she failed her children as a mother, she should at least have succeeded as a cautionary tale. She tries to call Sophia the next day, but finds her in some distress, which I’m sure we’ll hear more about next week.

Having an even worse day today is Boomer, who finds herself effectively crippled with the loss of her hands. It’s a mark of Katrina Milosevic’s talent and appeal that I can forget all about her appalling behavior of two weeks ago and be back on her side today. She can’t even open a box of cookies, much less bathe herself, which is starting to become a problem for her fellow prisoners.

Bea, fed up with all the bickering, assigns Liz and Boomer to be each other’s prison buddies: Liz to ensure that Boomer maintains some semblance of hygiene and Boomer to make sure that no one else beats up Liz’s face. It’s a move that Bea clearly intends to bring back some of the familial atmosphere of season one, but those bridges have all been burned. Liz and Boomer quickly ditch each other, but Boomer finds herself courted by two new friends with varying levels of altruism.

First up is Jess, who is still seething with jealousy since Doreen picked Liz to be her co-parent. Seeking to capitalize on the animosity between Dor and Liz, Jess offers her friendship to the too-trusting Boomer.

I would be happy to see more of Jess and find out her origin story, since she has a unique mix of warmth and menace that gives her the making of a truly interesting villain.