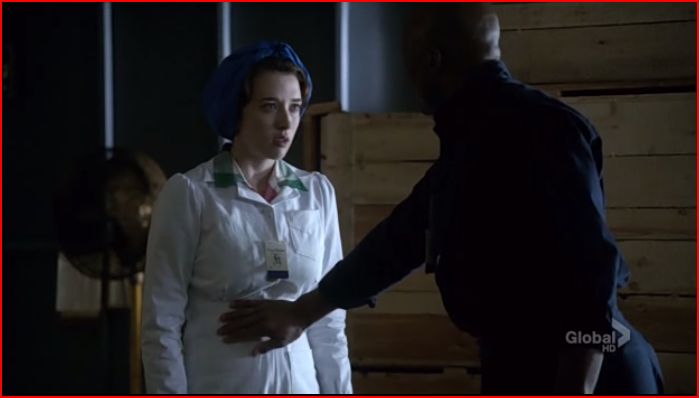 (This recap was originally published on October 3, 2012.)

So first of all, this:

All horn-tooting aside, the part I like best is “Betty means the world to me,” because it really shows. Really the whole cast — Charlotte Hegele, Jodi Balfour and Meg Tilly — come into their own more and more with every episode, which is a little bittersweet since this season is almost over.”

Now, this is my favorite episode to date so let’s jump right into the action.

Blue Shift is just minutes away from finishing Victory Munitions’ millionth bomb — you remember the bombs right, those things that kill people and one of them lives in Archie’s chest now—but let’s not forget who the real enemy is in this war: RED SHIFT. Those hacks are waiting in the wings for the chance to steal all the glory.

It looks like they won’t make it until Lorna, destroyer of worlds, joins the line, and with her help Blue Shift gets the millionth bomb made before shift’s end.

After work, Gladys and Kate are preparing for the killing-machine celebration party, when who should appear but Hazel, who embodies everything that is rotten in the soul of Red Shift. Hazel starts rubbing in the fact that she slept with James Or Whatever (I believe that is his full name) and Gladys is all “Avada Keda…” but Kate pulls her back at the last minute.

That night, a bohemian movie director has come to the factory to shoot some patriotic propaganda. He wants Gladys to be the star, but she can’t risk her parents seeing her conversing with commoners, so she declines, and really wishes that people would have more respect for the fact that she is IN DISGUISE. Her friend comments that “with all the good men off to war, we’re left with nothing but rogues and scoundrels,” which a. explains a lot about this show and b. are two words I’m determined to drag, kicking and screaming, back into the vernacular. Who’s with me?

Lorna has appointed herself chief of the Sex Police for this episode and is prowling around the warehouse like Snape outside the Yule Ball, determined to protect the virtue of all the Vic Mu girls. She spies Marco, with whom she has now exchanged two illicit kisses, locking lips with another woman.

Rather than just casting an Unforgivable Curse on him like a normal person, Lorna decides to extract her vengeance on the entire factory. Because if Lorna can’t get laid, neither can anyone else.

Outside the factory, Betty, Gladys, and Kate are discussing the film they just saw, Suspicion. Gladys is comparing it to her plight with James, but Betty is just like “It was about some dude or something? Yeah I was out here, smoking.”

Kate asks her why she still hasn’t confronted James about his affair and Gladys confesses to her own dalliance with the hip flask soldier in episode one, although she declines to mention that he proposed marriage and she said yes. Betty is actually impressed.

Gladys: Betts, we didn’t go all the way. What kind of a girl do you think I am?
Betty: I’m trying to figure that out.

The next day, Kate tracks down Leon in the warehouse and starts singing Billie Holiday at him, in the hopes that he will teach her the mysterious ways of jazz. Leon would really rather she leave him alone though, since every time they talk, some white guy comes up and starts being horrible. Kate however, is still so new to the wide world that she believes that anything is possible, so he shows her how to bellow.

Naturally, the factory manager — Lorna calls him “Snaky Akins” so we’re going with that from now on — is drawn to this spectacle by his hate-radar, and the sight of Kate and Leon together is offensive enough to persuade him that Lorna has a point, and there are far too many hormones raging at Vic Mu.