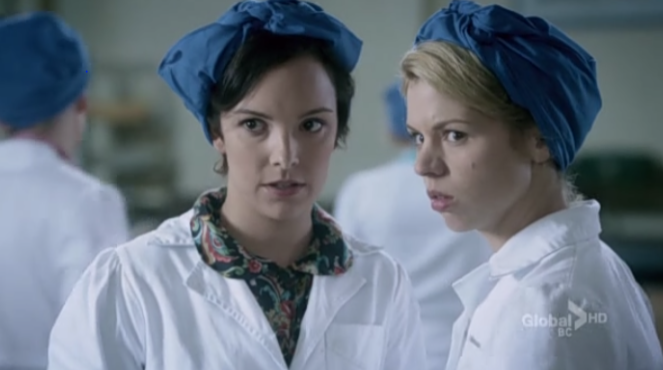 (This recap was originally published on September 19, 2012.)

I’d like to start by thanking everyone who commented this week. I’m so excited to gush over this show together. Let’s never fight.

So far, other than talking to you guys, the coolest thing about recapping this show is being forced to re-watch and rethink episodes. It’s made me change my opinion on a couple of things. Firstly, I’ll admit that I was not initially very fond of Ms. Gladys Witham, because I thought she was the Canadian Lady Mary, and the spot for “poor little rich girl” in my heart has already been claimed by a girl with the eyebrows of an angel and an immortal golden retriever. But then it came to me in a dream: Gladys isn’t the Canadian Mary Crowley, she’s the 1940s Spencer Hastings. Because Gladys, like Spencer, uses her beauty, wits, and sense of entitlement for the righting of wrongs and solving of, well very little actually, but by gum, she’s trying! (And if you don’t get all the Pretty Little Liars references I make in this recap, I will gladly wait here while you get your life sorted out.)

When the episode begins, the men of victory munitions are tossing back a few cold ones, talking T&A, and blowing shit up. You know, guy stuff. It’s very difficult to focus on any of this though, because the show has hired what I can only assume is the female gremlin from Gremlins 2 to sing in the background.

Gladys, meanwhile, is positively glowing with excitement for her first day on the factory floor. No more sitting cold and distant in the secretary’s office, now she can be close to the girls and their lovely soft — I mean, the bombs. The bombs. Naturally, this must be kept secret from her parents, who would be very annoyed if she were to die before her wedding. She’s having a hard time blending in though, as no one will let her forget the fact that this job a mere hobby for her, as opposed to a means of fending off starvation.

Back to the boys, we have this week’s Horrific Workplace Tragedy, as even the gremlin is drowned out when one of the bombs the boys are testing misfires, wounding several of them.

Marco runs up covered in blood and styling gel, bearing the awful news that the faulty bomb was built by our girls, which means a world of trouble. Gladys suggests that maybe this sort of accident could be avoided if they had, like an in-house yoga studio or some aromatherapy or just regular massage circles. Everyone looks at her blankly so she mumbles “or maybe like functional lights so we could see what we’re doing.” The others are forced to agree that not making bombs in the dark might be a good idea.

This, by the way, is the episode when I start to fall in love with Lorna. You see, my Gladys-Spencer revelation was accompanied by the insight that Lorna is the Mona of this show. Just watch: here she is sponge-bathing her mortal enemy, Marco, who is furiously chesting and catholicking and survivors guilting.

Naturally, the factory manager uses today’s catastrophe as an excuse to burst into the women’s dressing room — where some truly fantastic vintage underwear is on display — and announce that all of the women and none of the men now have to take a skills test. The recently widowed Edith is overwhelmed by her job being at stake, and having three hairstyles at once, and trying to forge letters to make her children believe their father is still alive.

She’s showing Lorna her letters and Lorna STEALS THEM. She just walks right off and Edith looks after her like she’s trying to decide if she just hallucinated that or if it really happened. It’s pizza night at Witham Castle and as usual, it’s served with a healthy side of sneering greed. Gladys whips out her patriotic tap dance again, to everyone’s exhaustion, and starts going on like roofied Branson (god I am so happy Downton Abbey is back). Later, Gladys’ mom yells at her to be a good little Stepford but I’m not listening because I’m too distracted by her choice in decorative photographs.

Major thanks to AE member Buckboard for clueing me in that — get ready for this — Lorna’s husband is Judy Squires from Better Than Chocolate. I instantly started liking him 16 times more, because I don’t know about you, but I still get “I’m not a F—ng Drag Queen” stuck in my head every few months. And now we know why Lorna stole Edith’s letters: she wants Bob to write them in his own, masculine hand.