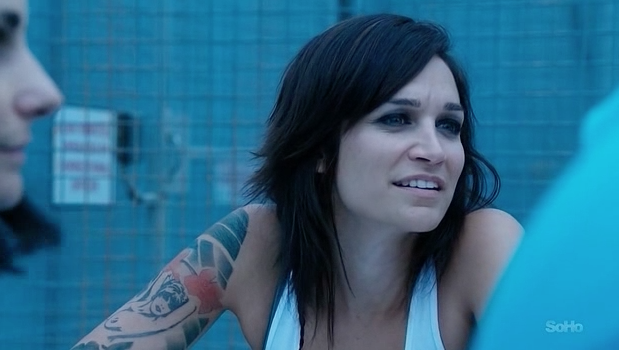 Meanwhile, in Golden Light Land, Fletch lies on some grass and listens to some pleasant dude-rock and smiles at Vera. That’s literally an entire scene, and that’s alright with me because the song is nice and it’s just all Fletch is up for these days.

Back at the prison, Joan approaches Bea about halting the supply of drugs to the prison. Joan agrees to restart the drug counseling program if Bea snitches on Franky. But Maxine offers Bea some sage advice, which is: Joan’s endgame will always be ultimate power, and she could do it in one fell swoop by destroying Franky’s business and Bea’s credibility with the some.

In other guard drama, the hot doctor won’t move in with Will until he patches things up with Fletch. (It turns out Fletch did get around to calling Will, Will just never picked up.)  So, grudgingly, Will straps on the old gloves and climbs in the ring for another round of Competitive Male Decency.

Will: I WANT YOU TO KNOW I’M ONLY HERE BECAUSE IT’S THE MATURE, KIND THING TO DO.

Fletch: And I want you to know that I am deeply sorry for sleeping with your wife and disrespecting our friendship.

Will: NO IT’S COOL BECAUSE I FORGIVE YOU. I FORGIVE YOU SO MOTHERFUCKING HARD I AM JUST GOING TO HUG YOU UNTIL YOU LITERALLY DIE.

Fletch: And I will die knowing that my spiritual transformation, post-van attack, has made me a more evolved person than you could ever hope to be.

WILL: FUCK YOU. I’M GONNA GO HELP SOME OLD LADIES CROSS SOME STREETS.

Fletch: And I’m gonna let some old ladies help me.

Real curious to see how this all plays out.

Like with last week, the second half of the episode picks up the pace, and so shall we.

First, Franky gambles her reputation and a lot of other people’s money on her ability to get a big shipment of drugs into the kitchen. Then, Maxine and Bea corner Jodie in the showers to get the scoop on the chickens.

Jodie is very fond of Franky, but she’s a delicate flower and caves almost instantly.

The chickens come, Franky rushes to rescue the drugs, but the guards swoop down while she’s still wrist-deep in salmonella.

She pulls out her hand, which turns out to be clutching nothing more than giblets.  The best part of the scene/episode/my life as a human person is the drug dog’s reaction shot.

But Franky won’t get off that easy. The guards toss the cells and find the drugs under Jodie’s mattress because this show doesn’t want Franky to have a girlfriend Maxine put them there.  Jodie gets carted off to the slot and Franky realizes the wolves are about to close in.

Joan tells Bea that getting rid of the drugs wasn’t enough; she has to take down Franky once and for all.  Of course, the way to do that is to neutralize her last and strongest ally.

This Bea does in time-honored Wentworth fashion, with the steam press.

Bea says Boomer has to pay for attacking Liz, and warns the women that anyone caught smuggling drugs will meet with the same fate.  Boomer howls and Liz cringes and Franky looks like her heart is going to break.  Franky goes to Boomer’s cell to make amends.

Boomer: Why didn’t you stop her?

Boomer: Yeah, you could.  You could.  You just stand up and you help and you don’t give a fuck what happens because you’re not gonna let nothing happen to someone that you love.  ‘Cause I love you, Franky. I love you but you never love me. I would do anything for love, but you give nothing back.  Because you’re shit.

This scene does some really important triple duty because it

Of course, none of that would be possible without Nicole da Silva and Katrina Milosevic, who play off each other with such breathtaking intensity. I hope they keep getting scenes of that caliber to play.

Nearly as potent is the next scene, where Franky confronts Bea in the shower about her transformation from Betty Crocker to Don Corleone.

Franky says that Bea is the worst kind of psycho: the one who thinks they’re acting for the greater good. She has that in common with The Freak, actually.

Speaking of Joan, she next calls Bea and Will into her office because someone murdered Bea’s husband and Will is now the prime suspect.  This is obviously all part of Joan’s master plan, and while it might conceivably end badly for Will, for Bea it’s even better than a pizza party.

Next week: OMG FRANKY WHAT ARE YOU GOING TO DO EVERYONE IS COMING AFTER YOU FOR THEIR DRUGS. TRY MAKING YOUR CUTE FACE AT THEM. It always works on me.