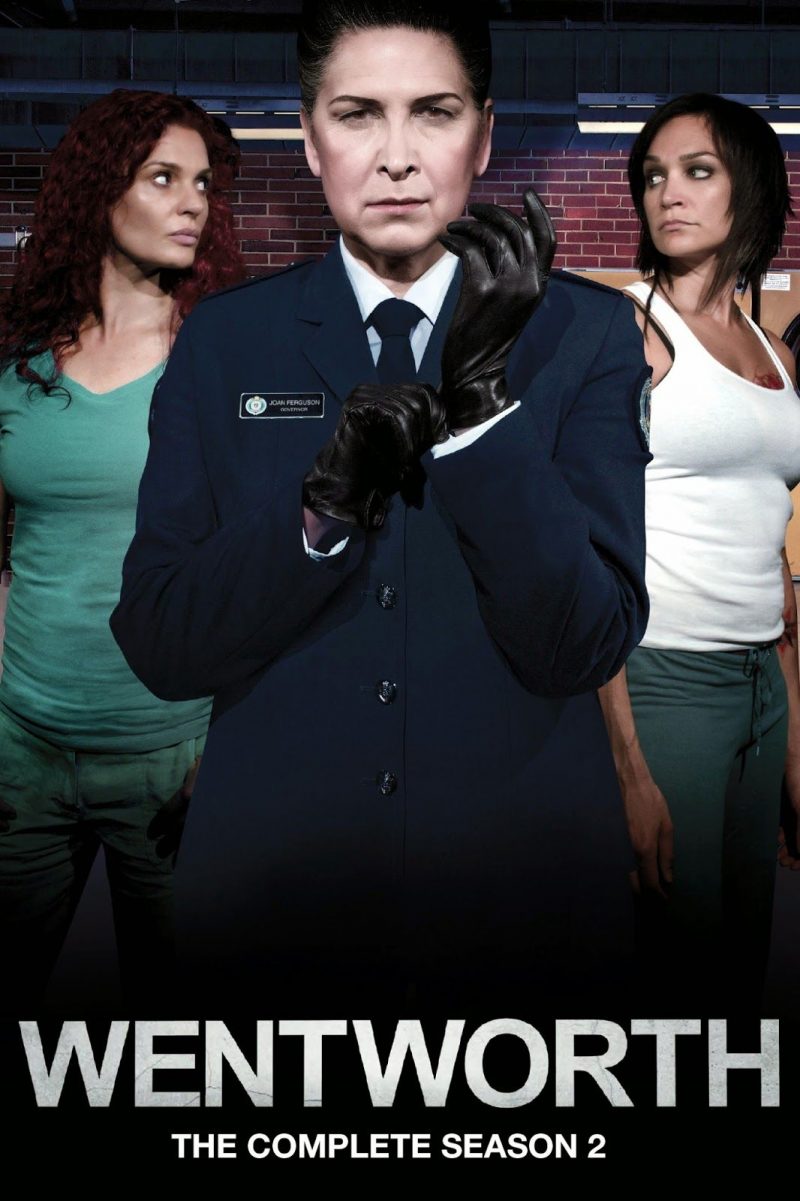 (This recap was originally published on June 25, 2014. And for some reason I couldn’t find the pictures for it, so use your imaginations!)

The first shot this week is the unintentionally hilarious face of Skye, high as a club kid, doing a pretty good reenactment of the “Ray of Light” video.

The bad news is that she’s on the prison roof and convinced that she can fly. Will pulls her to safety before she puts those R. Kelly lyrics to the test, but it alerts Joan to the presence of drugs. She leans on Liz to tell her where the drugs are coming from, but even though Liz is plagued by a guilty conscience, she still won’t violate the sacred bonds of prison sisterhood and turn in Franky. She does, however, go to Franky and try to appeal to her better nature.

She asks Franky to consider how she might feel if Skye had actually jumped, but the only person who was really successful at guilt-tripping her was Erica, and she’s gone now. (I, for one, would have been relieved to say goodbye to Skye, since she reminds me of a less charming Pennsatucky.)

In her office, Joan becomes convinced that Simone’s husband is the source of the drugs, since he’s been visiting so often lately. I think this plot is ridiculous for two reasons:

Speaking of the garden, Frankie complains to craggy-face about the bad drugs he sold her that had such a bad affect on Skye (although she looked like she was having the time of her life). He promises that the next batch will be a special brand known as Pink Dragon. I will be conducting an informal poll in the comments section about whether Pink Dragon should be a new nickname for Franky or vaginas in general.

While Franky’s crew works in the garden, Simone meets up with her husband. Bea thinks she’s going to get the number of a hit man, when in reality Mr. Simone is begging her to kill Bea. He has good reason to beg; if Simone doesn’t do her job, both he and their daughter could die at the hands of the Holts. Simone suggests that they employ their friendly neighborhood hit man to just kill Vinny Holt and solve all their problems, but it’s more than they can afford.

Nash, Doreen’s boy toy, overhears the exchange about Franky’s new gear and warns Doreen that Pink Dragon is actually very bad news, and has been responsible for two ODs already. Doreen, in turn, passes this intel along to Liz, who struggles to come up with a way to keep the drugs away from the women without narcing on Frankie. She goes to Joan and arranges to tell her when the new batch of drugs gets in without revealing who is bringing it. She also takes Joan to task for reducing the women’s methadone and exacerbating this whole situation. It’s Liz at her finest and in makes me really hope she doesn’t get murdered before her parole date.

Also getting creative is Simone, who decides to use Bea’s money and hit man to take care of Vinnie Holt. Actually, given the circumstances, it’s probably the best outcome for everyone, since otherwise either Bea or Simone’s family will die. But first she has to get the killer (whose name in Morgan, the least murder-y name this side of Sheldon) on her approved call list. Assuming this has something to do with the drugs being brought in, Joan tries to figure out who this Uncle Morgan is. So here is what Joan does: she reaches inside her office safe for one of several cell phones, and calls a mysterious informant. We then cut back to her weird fencing classes.

Her fencing instructor, who vaguely resembles Syrio Forel, is giving her some heavy-handed metaphorical advice about knowing when and how to strike down your enemies, and I’ve just convinced myself that this is all an elaborate dream sequence, when the dude she called on her secret cell phone shows up. He tells her that Morgan is a contract killer, but does not explain who he is or who they know each other or what the fuck is the deal with the fencing.

Joan, understandably, does not add Morgan to Simon’s approved call list, and when Simone finds out, she throws an epic tantrum, trashing a bathroom and kicking a tile so hard a perfectly knife-shaped piece falls out.

She takes her shiv out to the courtyard, but can’t quite bring herself to stab anyone. On CCTV, Joan watches her drop the shiv and (finally) starts to see what’s going on. Seeing just how much she doesn’t want to commit murder is the most humanizing moment we’ve ever had with Simone. She calls her husband to tell him she’s just not a killer, and Joan eavesdrops on the whole thing.

Simone’s next stop is Frankie’s cell, where she scores some gear. Much as I hate to see this sort of transaction go down, we are treated to a gratuitous and very pleasing shot of Frankie post-coitus and wrapped in a sheet.

I’m really frustrated, though, by the continual lack of exploration of Kim’s character or her relationship with Frankie. It’s a waste of a good storyline, if you ask me.

When Simone gets back to her cell she shoots up, deliberately ODing but not quite dying. She’s taken to the hospital wing and the hot doctor puts her on antidepressants.

That night, Vera is at home taking care of her dying, but still incredibly unpleasant mother, when Joan shows up with food, just like Fletch did last season. But whereas Fletch’s motives for bringing over couscous were obvious, Joan’s are a little more obscure. Like, obviously she sees that Vera is an asset at Wentworth and wants to earn her loyalty. But is there also an element of sexual predation there? It’s episode six and we still don’t have any answers about Joan’s ultimate goals or motives. They just keep piling on the mysteries with her, like when she whispers something inaudible but almost certainly menacing in Vera’s mom’s ear. (Not that Vera’s mom doesn’t have it coming.)

In Vera’s kitchen, Joan helps prepare dinner while Vera goes on about how her mom’s meds are really horse tranquilizers and on any lesser mortal it would kill them, but her mom is made of rawhide and refuses to die.

Let’s talk about the true protagonist of Season 2: that poor injured bird. Contrary to this narrative, birds really do not like to be picked up and stroked by humans. So, even though its wing is still hurt, it tries to get up and RUN AWAY from Doreen and Nash. Everyone thinks it is just precious and eagerly watch it try to escape, but I don’t think anyone, including the writer, manages to see it as a metaphor for prison life or possibly just life in general.

While they are all distracted, Frankie and Craggy-face sneak off to she shed to get the drugs. He hands her the gear—as promised, pink as a pixie stick—but says it will cost her something extra. He bends her over the counter and tries to rape her. It’s really scary, but only for a second, because Frankie stabs him with a garden fork before he can get very far. This is the second time Frankie has been threatened with an attempted rape, and I really wish the show would make some time to explore the psychological effect it’s having on her. I’m glad she stabbed that bastard, though.

She is led away in chains, but Will, at least, congratulates her for doing the right thing.

But even if the forking weren’t enough to end Frankie’s pipeline, the incident shuts down the garden project and the male inmates are sent away for good. Doreen and Nash have a tearful goodbye that is unexpectedly moving and makes me regret all the mean things I thought about him.

I bet you guys two cigarettes and half a stick of gum that Dor is pregnant, though.

When the men are gone, Vera finds the hiding place in the shed (what a crazy coincidence that OITNB had exactly the same hiding place, eh?). The drugs, however, are nowhere to be found.

Inside, Boomer tells Liz that she rescued the drugs and is hiding them until Frankie gets back. Boomer is so proud of herself, and can’t wait for Frankie’s gratitude, but the second she walks away, Liz finds where she’s hiding the drugs and turns her in. Why she couldn’t have flushed the drugs, or planted them in Franky’s cell is beyond me, since now Boomer is getting several years tacked on to her sentence. It doesn’t occur to Boomer (yet) to blame all this on Frankie, but I’m sure that is Joan’s ultimate goal.

Meanwhile, with all her other options exhausted, Simone decides to kill Bea after all. Little does she know, Joan has switched her antidepressants for Vera’s mom’s horse tranquilizers, so we’ll see who kills who first with the resources at hand.

So, for someone who has never committed murder before, Simone’s strategy is awfully ambitious. It’s like a Rube Goldberg sort of mousetrap involving gum, two pieces of electrical wire, a pencil cup, and a puddle of water.

Sadly, we never get to see how/if Simone’s device worked, because Bea finds her dead in her cell with a needle sticking out of her arm.

As much as this episode has tried to make me empathize with Simone, I don’t feel her character is a huge loss. What is more interesting is the syringe she leaves behind, filled with Pink Dragon. Hopefully someone will connect the dots that the only person who had access to that bag was Joan.

What do you think Joan’s ultimate motives are? What is the deal with her fencing?