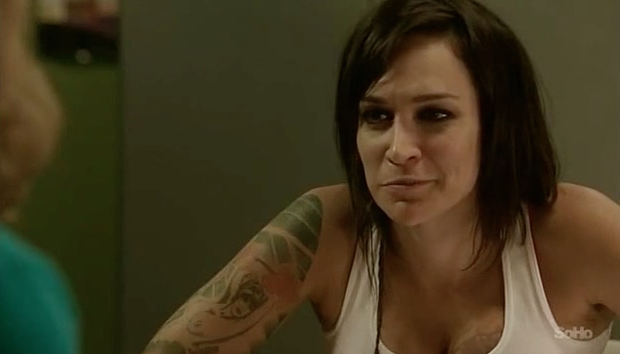 Out in the garden, Boomer tries to have a heart-to-heart with Frankie about her romantic woes, but Frankie is distracted by Maxine’s feats of strength. Always looking to beef up her posse with the strongest inmates, she abandons Boomer to pursue Maxine. Boomer, stung by this betrayal, tries to show off and lift 10.000 kilograms or whatever, and succeeds only in throwing out her back.

Back inside, Bea continues her game of using Simone to get to Brayden.  This week, she just begs her for the number of a hit man, which is at least more direct than her earlier schemes.  Since Brayden has already established himself as a daughter-killing psychopath, it’s not much work to get Simone worried about him, but she also knows that the Holts would kill her for even talking about this, so she keeps her hit man digits to herself.  For now.

We next journey to Will’s Inexplicably Posh House of Lies. Right as he gets home Vera calls him to be like, “OMG I can’t believe you took Fletch’s diary; he blames me!” And Will denies this but right at that moment that is own house was broken into. The door was forced open, belongings are scattered everywhere, but nothing was actually taken.  Will assumes Fletch broke in looking for his diary, but this is the moment when I begin to suspect that Joan is orchestrating this whole thing.  In reaction to all this confusion, Will threatens to call the cops, Fletch breaks his clean streak by chugging a bottle of scotch, and Vera rolls her eyes and wishes people would deal with their own drama.

When the pain gets to be too much, Boomer goes to the hospital wing for some care from the gorgeous, and still shockingly underused, doctor. When she hears Franky and Doreen walk by, she actually hides behind a curtain so they won’t see her injured and vulnerable.

That night, Maxine meets with her shitty, pre-pubescent lawyer to discuss her case, and he is cruelly transphobic, criminally unhelpful, and admittedly tipsy. She sends him away and opts to receive her legal services from Fanny Bandit, Attorney at Law.

She offers her legal expertise in exchange for Maxine’s services as henchwoman. Maxine politely demurs, but one does not simply say no to the top dog of cell block H.

The next day, Will tries to hand in his letter of resignation, but Joan rips it up, since it was Fletch she was trying to get rid of this whole time. I actually kind of love that no one is playing into her supervillain plans.

But everyone’s plans are forgotten when Boomer disappears. It kind of breaks my heart, imagining Boomer as big, gentle Puff the magic dragon, and Frankie as her fickle Jackie Paper (lest we forget, that song ended tragically as fuck).  But when Frankie hears she’s missing, she vows to tear up the entire prison (prisoners and all) until she finds her.  The guards are also searching high and low for Booms, and Joan deliberately sends Fletch and Will to the same area, clearly hoping they’ll fight again.

What’s surprising is that Fletch eggs Will on, telling him graphic details about his affair with Meg. This has the expected effect of getting Will to pulverize his face, but why? Does he want to get Will in trouble?  Does he just want to do that macho thing where two guys fight and then go back to being best friends?  His motives are unclear to me.

Much clearer are Bea’s motives. She pays off the blonde guard (her name continues to elude me) to tell Simone that her daughter is getting it on with Brayden Holt.  This, finally, is enough to terrify Simone, so she agrees to get the hit man’s number.

After Fletch and Will’s showdown, Joan threatens to fire Fletch, but he refuses to budge. After all, he’s the one with the busted up face, so why isn’t Will being fired? I really had no idea Fletch was capable of being this clever, so good for him. Joan, meanwhile, is intensely irritated that people are not behaving like pawns. They get a little closer to unmasking her as the mastermind when Fletch asks Will why he would break down the door to his house when he knows where the extra key is. I miss their bromance so I hope they patch this up.

Back in the visitors’ area, Simone scores the assassin’s number for Bea. But she also learns that the Holts want HER to kill Bea. So that’s going to complicate their friendship a bit.

Of course, we couldn’t end the episode without finding dear old Boomer. As it turns out, she has been hiding in a laundry chute, which is the sweetest, saddest thing imaginable.When Joan talks to her, she tries to make Boomer feel as lost and unloved as possible, with the endgame of breaking up Frankie’s gang. She offers her extra perks and privileges to inform on Frankie’s pipeline, but Boomer bites the bullet and gets sent to the slot.On her way out, Frankie sees her and says “I missed ya” and wraps her pinky finger around Boomer’s pinky finger.

In that small gesture of tenderness, I feel my love for this show come back, at least a little. If Boomer and Frankie can still be friends, if Frankie can still be irascible and dangerous and lovable as a wolf cub, then there is something left in Wentworth to fight for and hope for.