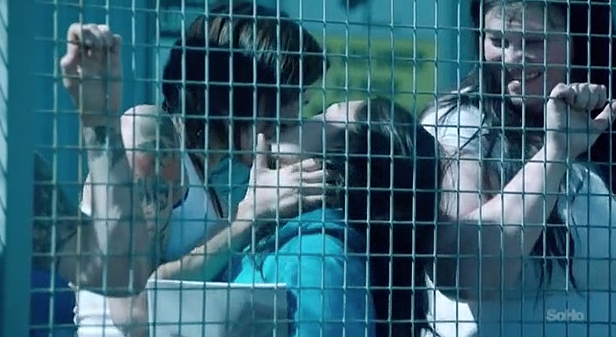 Previously on Wentworth, the prisoners struggled to adjust to life under a new  warden. Joan Ferguson lost no time in bringing the ladies to heel, and especially in shutting down Franky’s drug-smuggling operation. She also had some weird tension with Vera that made everybody uncomfortable. Franky, meanwhile, went all Machiavelli and strictly forbade anyone from finding her remotely cute or cuddly anymore.

This episode opens with some of Wentworth’s strongest imagery to date: blood red droplets falling from Bea into a sink. At first we can’t tell if it’s coming from her hands (is she the perpetrator?) or her head (is she the victim?) and then we finally realize that it’s red hair dye. It’s war paint, really, and it signals the beginning of her transition into a warrior.

Right on cue, Boomer enters (apparently her being in the Slot interfered with this week’s plot) and delivers all her newspaper clippings about Brayden Holt. The fact that Boomber has developed such a specific obsession that dovetails perfectly with Bea’s need for vengeance is a mite ridiculous, but whatever.

Bea barely has time to read all about the horror show that is Jacs’ family before Will interrupts her and drags her to an appointment with Harry, who you will remember as season one’s last place finisher in Competitive Male Decency. He’s here to ask Bea for a divorce, presumably so he can go on to ruin some other woman’s life. Will hands her a pen (really we are still trusting Bea with a pen? She’s not signing shit in crayon now?) but she refuses to sign the papers until Harry murders Brayden Holt. This is obviously, right from the get-go, a terrible plan. Harry was an incompetent husband and father; he didn’t even die properly when Bea tried to murder him. He whines that he probably couldn’t even find Brayden Holt, and Bea is like, “HIS FACE IS ON ALL OF THE NEWSPAPERS. THEY ARE COLLECTORS’ ITEMS. THERE IS PROBABLY A COMMEMORATIVE PLATE SOMEWHERE WITH DIRECTIONS TO HIS HOUSE.”

Back in H Block, tensions are running high (so to speak) since the supply of heroin has been cut off. Skye (the girl who was caught with the laundry cart last week) is particularly ansty and even threatens to go to another dealer to get her fix. But Liz puts the kibosh on that plan when she reveals that said other dealer (Big Tania) got beaten up by her own customers when she couldn’t deliver. Franky overhears this and starts to feel seriously uncomfortable about her future as Top Dog. Because if there’s any group that doesn’t give a fuck about supply and demand, it’s junkies.

Out in the yard (the blue filter is getting a bit out of control this year) Doreen starts work on her field of dreams, only to discover that the soil is full of rocks and shivs and Liz’s old booze bottles. So she goes to Joan with a request to convert an old guard’s shed into a greenhouse. Joan readily agrees, but of course, like everything in prison, her consent comes with a price. She asks Doreen to “keep an eye” on Bea. And I get that the show is trying to do a slow reveal with The Freak’s freakiness, but honestly I could stand for it to pick up the pace. Right now she just seems like a slightly sinister Madam Hooch.

Inside, Vera asks Liz to look after a new prisoner, Su Yung (please correct me if I’ve misspelled that) a Korean girl who doesn’t speak a word of English and whose facial expression is rivaled in patheticness only by her outfit.

Desperate to score some more drugs to keep her customers happy, Frankie tries to cozy up to the sultry prison doctor. I don’t know her name or why she has only been in two scenes so far, but I know that if she was my prison doctor I would get shived every day. Also, when Frankie talks to her, we see her turn on the old Erica Davidson charm, which is such a crucial leavening to keep this dark show from being dreary.

While Franky scrambles to stay in the game, Bea transforms into a criminal mastermind. She calls Harry’s place of work pretending to be one of Brayden’s associates, and schedules a meeting between the two of them. It’s a bit convenient that Brayden owns a chop shop and Harry works selling car parts, but no more convenient than the newspaper business.

Back on the block, Skye decides to protest her lack of drugs by threatening to slash her wrists.

Will tries to talk her down, but Fletch charges straight in to her cell where she, predictably, follows through on her promise of self-harm. Fletch responds to her gushing arteries by pepper spraying her directly in the eyeballs. Bea is the only one with the good sense to wrap up her wounds so the girl doesn’t actually die. Once she is subdued, Fletch tries to handcuff her bandaged wrists to a wheelchair, and everyone is like “Dude. Stop.” Fletch insists that pepper-spraying and restraints are just how the manual says to deal with suicidal prisoners. Joan scents the discord between the guards like a bloodhound, and files it away for future use.

I kind of hate that Harry gets to have a storyline at all this episode, since he is such a thoroughly loathsome character, but then, that seems to be the dominant type this season. He shows up at Brayden’s shop and thinks seriously about hitting him with a hammer before running away. The scene totally lacks tension, because you know Harry is neither brave nor stupid enough to kill Brayden in broad daylight. The only moment that is remotely compelling is when Brayden looks back and flashes a charming, boyish smile, because it is the only moment that complicates either of them or makes us invest in their fates. Oh and the cutaways to Bea washing Skye’s blood off her hands are ridiculously heavy-handed and totally squander the credit the show built with the hair dye imagery.

Really the only way I could be happy with Franky and Kim’s relationship is if we actually got to know Kim, but she just keeps getting tossed at us as an object of titillation.

Oh wait, she also gets to be conveniently Korean. She translates Su Yung’s speech and learns that she was busted for trafficking heroin, and still has two balloons stuck inside her. Of course, Franky sees this as the solution to her supply problem, and so begins Poopwatch 2014.

First she scores some vegetable oil from a contact in the kitchen, and we really have to talk about the system

Meanwhile, Bea is sent to therapy against her will, which Joan watches via CCTV, in an effort to learn what makes her tick. But when Bea starts listing off the things that used to make Harry beat her, she suddenly realizes the key to making him kill Brayden.

After her session, she calls Harry to tell him what a disgusting person he is, which makes him fightin’ mad. And since he is all out of wives to punch, he takes his rage straight to Brayden’s garage.

Up in the second floor, he sees a person-shaped silhouette, figures it must be Brayden Holt: Teen Villain, and proceeds to douse the place in gasoline. He then locks the door shut (he was carrying a padlock in his pocket I guess?) and walks away. He’s so unoriginal he actually tries to kill someone in the same way Bea tried to kill him.

You don’t really need me to tell you that Brayden Holt wasn’t in the garage, right? Even the poor, hapless guy Harry did manage to lock up survived.

Before Bea can come up with another brilliant assassination plan, Boomer shows up to demand a makeover, so she can show off for the male prisoners. Here are the results of that transformation.

The thing is, Boomer’s character had great comic relief when we were laughing with her, not at her. Now the show has made her its Gimli The Dwarf: a dignified creature made ridiculous by having to provide all the jokes.

Out in the yard, Doreen bonds with a male prisoner named Nash over a bird whose nest they knock over. They coo over it and pet it like a dog, which is the last thing that bird wants, I guarantee you.

Probably this Nash guy will turn out to be a psychopath and kill Doreen. Just you wait.

That night, the weirdest scenes of the episode take place on top of each other, when Joan sort of coerces Vera into having a drink with her. This is the first scene where Joan seems at all powerful or creepy to me, and it comes from her vaguely sexual overtones towards Vera.

At first you think Joan is really just sad and desperate for some companionship, but then the camera reveals that she is deliberately getting Vera drunk on vodka while serving herself plain soda water. She then pressures Vera into confessing that she read Fletch’s journal that one time. It’s hard to tell if she’s just using Vera to get Fletch—at one point her main rival for Governor—out of the way, or if there is also some sexual energy at play. Either way it’s deeply uncomfortable, but I guess the stereotype of the predatory lesbian is old enough that I don’t need to get offended by it.

While this is going down, one of the balloon’s in Su Yung’s body bursts, and she ODs. Is it horrible I really wanted her to poop out the heroin so Franky could go back to being niceish. I could also object to Su Yung’s being treated as a disposable prop by the characters and the show, but I’m actually curious to see what being implicated in her death does to Franky and Liz.

Okay and then there is this total non sequitur of a scene where Joan is fencing, and then this guy just silently nods at her? At first I thought it was a commercial and I still have no idea how it ties in to the rest of the narrative. Or possibly if I am hallucinating it.

In the aftermath of Su Yung’s death, Liz confronts Franky about just how far she’s fallen. I’m going to quote the dialogue verbatim, because it’s the strongest of the show.

Franky: You don’t understand.
Liz: I do understand, darling. You’re a frightened little kid, paddling out of you depth. You’re shit scared you’ve swum out too far and you’re not going to make it back to shore. And do you know what? I don’t reckon you can. You’ve gone too far, Franky.

To her credit, Nicole da Silva reacts to this speech both with a desperate bravado and a devastating fear that she is losing herself. And, lost or not, she’s the same magnetic person she’s always been. But if it’s true about Franky, that she’s gone too far towards evil and will drown somewhere in those black waters, then this show just became a lot less interesting. The inner battles for each character to maintain some sense of self were what made last season so compelling. If that battle is over, then what is left to watch?