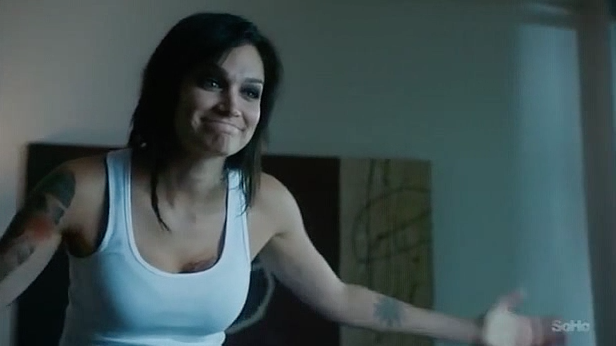 Hey y’all, this has to be a short recap on account of I have a secret life where I am a struggling waitress and dog owner, but I promise to fully sink my teeth into the scene where Franky talks about sex.

Previously on Wentworth, Mr. Channing confiscated Franky’s letters to Erica, thus coming between the hottest couple in the southern hemisphere and guaranteeing himself a place in the hottest circle of hell. Bea talked Maxine into joining Franky’s posse as a spy, and also started hoarding magic blood-stopping pills in order to carry off her eventual coup. Boomer took the fall for Franky’s drugs, and Liz admitted she was the one who got her caught.

This week’s episode centers around storylines which have been mostly overlooked this season in favor of extended Joan fencing scenes: Liz and guard politics. It’s Liz’s release day, so she pens a letter to her children (really just her daughter; her son seems to be something of an afterthought.) Her release, of course, is fraught with disappointments. It’s a key element of most prison shows to highlight the difficulties prisoners face upon release, but Liz is a great example of it since she looks like everybody’s grandmother and you can’t help but worry that she’s too polite to make it in the real world.

And at first that’s how it goes.

She lands in this dingy halfway house, where a horrifying ex-con holds her down on the bed and takes all her money, in one of the most affecting scenes of the season. She shows up at her family’s home with her letters to her kids in hand, but lets herself be talked out of giving them by their new mom. Then she stalks her daughter when she goes out for a night of drinking. At first, you’re afraid Liz is about to backslide into alcoholism, but no, just the stalking.

It’s a good thing she’s there too, because it looks like Liz Junior has inherited her mom’s substance abuse issues, and swiftly drinks herself to the point of incapacitation. The fellow she is with seizes this opportunity and tries to rape her out in the parking lot, but mama Liz swoops into the rescue. She puts her daughter in a taxi and they share a sweet moment, which Liz Junior probably won’t remember the next morning. Then she goes back to the halfway house, threatens the creepy ex-con with a steak knife, and starts her new life in earnest. And honestly, I’d be happy if this is where we leave Liz, as a sweet old lady who is secretly a superhero, patrolling the Australian streets and ready to stab any young hooligan who threatens her kids.

Liz has no idea how close she came to danger this week, though. The incident with the Pink Dragon got Boomer seven extra years tacked onto her sentence, so she swears revenge. She has the number of a hit man (according to this show, most people in Australia have an uncle or a cousin who is a professional killer) and only needs the address of where Liz is staying. Franky manages to obtain it to her—I’m curious to know who she got it from—and then the rest of the episode is like a game of keep-away, with Bea and Maxine trying to prevent Boomer from making the call and ordering the hit.

Oh those silly ladies. They can commit crimes and order murders and break out of freezers, but if you dare broach the subject of their body type, they EXPLODE.

Anyway, Boomer gets hauled off to the slot, vowing to do literal murder on Bea once she emerges, so I guess that means Bea needs to fast-track her whole hemophilia med plan then.

Speaking of the old magic pills, how’s that going?

That’s some lovely finger painting there, Bea, but I don’t see how it’s going to help you overthrow Franky.

Oooooookay then. I’ll let you get back to it.

But by far the most interesting storyline of the week involves the power grapples of an unlikely handful of characters: Fletch, Joan, Channing, Vera, and Franky. All season long, Wentworth has struggled with a villain problem. It goes back and forth between making Joan a crazy, ruthless tactician who would kill Simone just so Bea could maybe be Top Dog and making her a flawed but human caretaker who goes after Will because he mistreated the love of her life. I’m not saying she can’t be both; I like shades of gray a lot more than good guys and bad guys, but this season has been gray drained of all color, with the result of everyone looking equally unlikeable. Our unexpected rescuer arrives in the form of Channing, who wants to fire Joan and replace her with Fletch. The great thing about Channing is how thoroughly detestable he is; you don’t need to explore the recesses of his character because all he is, is a misogynist, an ass-grabber, and almost certainly the driver of a red convertible.

He also brings out the worst in Fletch. (Man, Fletch this season is like watching human evolution in reverse. Next week I fully expect to see him living in a cave and hunting for mammoth.) Anyway, Channing needs more than just Fletch’s testimony to get Joan fired, so he asks Vera to narc on her. He even promises to give Vera the job of Joan’s replacement. Time was, this would have worked like a charm. Time was, Vera was so desperate for personal and professional approval she would have said anything for a pat on the back. But that was before the dawn of Ultra-Vera. And Ultra-Vera knows better than to trust a single word out of Channing’s smirking mouth, so she refuses to betray Joan.

Channing’s next target is Franky, who he promises to help with her assault charge against her attempted rapist. He suggests that a change in leadership is in order, but it is here that he makes a big mistake. All he needs to say to get Franky on his side is say that he would fire Joan and reinstate Erica. Hell, I would be on his side if he said that. But Franky is still sore that he didn’t mail her letters to Erica, so she decides to fuck with him a bit.

Franky: Just imagine, me and Erica touching each other, ravenously removing elaborate lingerie from each other’s tanned, quivering body. Now imagine you’re there. What’s that we’re doing? Why, we’re each arching a coy fingertip towards you, inviting you to join our love play. You approach us: a firm, strong man. Now imagine WE MORPH INTO ZOMBIES AND CANNIBALIZE YOU. WE SHARE YOUR INTESTINES LIKE LADY AND THE GODDAMN TRAMP. FUCK YOU.

See, even talking about Erica brings out the Franky we know and love. She still hates Joan, though, so she offers to help him out once he’s dealt with the assault charges. Franky is probably his best shot at ousting Joan, since she knows the truth about Simone’s death. But he never gets to see it through because Joan uncovers a secret plot in which he escorted paroled prisoners out of prison and straight into a brothel he owns. But–and here’s where the shades of grey thing comes back—rather than turning him in and putting a stop to this despicable practice, she decides to blackmail him on an ongoing basis.

So, I have a serious question to ask: do you think that Erica is ever coming back or should we collectively give up that ghost?