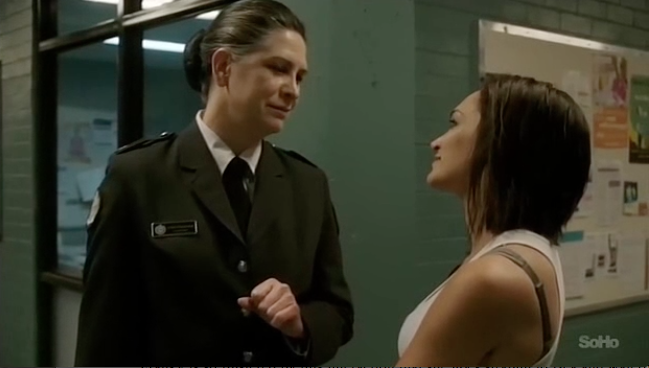 Hello and welcome back to prison!  It’s been a long time since we have wandered the halls of cell block H together and much has changed. It’s not just the loss of Erica Davidson (Leeanna Walsman) and her predatory charisma, though she is deeply missed. It’s not the vacuum left by Jaqs Holt (Kris McQuade), though no villain arises to claim the screen as ferociously as she did. No, what’s missing from Wentworth is its urgency and its devastating humanity, which is probably attributable to the mysterious departure of ex-showrunner Lara Radulovich at the end of last season. What’s left is something that looks like our show, and sounds like our show, but may only be its doppelganger.

With that said, I have missed Fanny Bandit and the gang like crazy, so it’s good to be back. We hit the ground running, with an introduction to the new Governor. Erica’s replacement comes in the form of Joan Ferguson, who five minutes of Googling taught me is an iconic character from the original Prisoner series more popularly known as The Freak. She gives the guards a speech like “THE DICTIONARY DEFINES ‘CORRECTION’ AS” and I honestly stop paying attention right then. Like, I know this character is supposed to exude power and menace, but I’m just not feeling it. Her first order of business is to bust Franky’s drug smuggling ring and confiscate the heroin. But she doesn’t do it in a way that is particularly tough or ingenious; it’s pretty much right where you’d expect it to be if you were smuggling heroin in a laundry basket.  Franky (looking fine as ever, her tiny braid waving proudly) is like “who the fuck are you and what did you do with my girlfriend?” And Joan slowly steps into the light, in a badly overplayed shot to be like “Ms. Ferguson, Intimidating New Governor.”

Then it’s on to the title sequence, which for some reason, is the same song as last season but now with lyrics?  It’s weird, but “you don’t know me when I don’t know you” pretty much sums up how I feel about this entire episode.

Back on cell block H, Boomer rounds up the women who were responsible for the drug smuggling and brings them to Top Dog Doyle.

Franky: Which one of you tipped of the Governor about my system?  You can tell me, I promise I won’t be mad.

Frightened Prisoner 1: I DON’T KNOW PLEASE DON’T SIC YOUR BRAID ON ME.

Franky: You know how the Romans settled these things?

Frightened Prisoner 2: They all stabbed Caesar?

But the answer, apparently, is that they were locked in a cell together to beat the shit out of each other.

Either Franky has taken a page from the Jaqs Holt Leadership Manual, or she thinks that if she acts bad enough, Erica will come back.

In the guards room, we say hi to Fletch, who has quit drinking in the three months since the events of the finale. And as a drinker, normally it would sadden me to lose one of our number, but in Fletch’s case it’s probably for the best. It’s clear he has sobered up partly to get back in Vera’s good graces, but she ignores him in that adorable Vera way, like a very busy mouse. Oh and also Vera’s mom is dying of cancer.  And as a daughter, normally it would sadden me to hear of someone’s mom dying. But in the case of Vera’s mom, it’s probably for the best.

In the Governor’s office—sadly lifeless without its former occupant—Franky has a private meeting with Joan.  And boy oh boy is it rife with innuendo. I guess now is a good time to mention that in the original series, The Freak was a big ol lesbo.  So when she says “Erica and I have different tastes”  I’m assuming she just means she likes ‘em a little femmier than Franky.  Anyway, she offers Franky her protection in exchange for help cutting off the drug supply to the prisoners.   Since Franky’s position as top dog depends on the drugs, and since she has a natural aversion to authority figures, she decides to pretend to be Joan’s pawn while continuing to do her own thing.  As she turns to leave, though, Joan pulls out a sheaf of letters that Franky wrote to Erica and which were never sent.