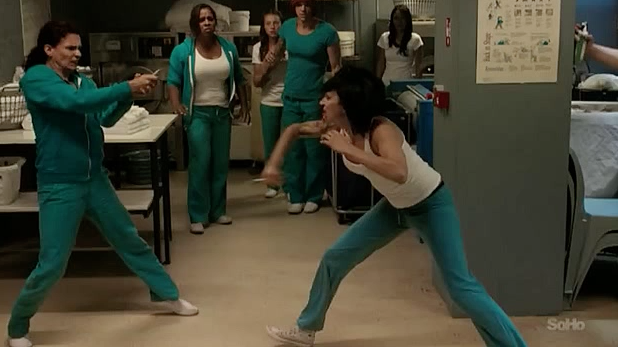 Speaking of Joan, she’s grown tired of waiting around for Bea to topple Franky’s dominoes, so she releases Boomer from the slot, just to keep things interesting.

Boomer, of course, wants to rip Bea limb from limb, but Franky says that she’s not allowed; the battle for supremacy can only be one-on-one.  I don’t seem to remember this honor code being in place in the days of Jaqs, but whatever.

Maxine is also taken out of play, when Franky notices she and Bea whispering to each other.  Franky drops some transphobic shaming on Maxine and warns her to stay out of the coming rumble.  She also tracks down Bea’s shiv, so now our red lady is left unarmed. Confident that the deck is stacked in her favor, Franky tells Bea that they will battle for supremacy “after lunch.”  Which means that Bea does everything she does next in about fifteen minutes.

Okay, remember Jess, that super flirty new inmate?  Well she turns the charm up to eleven on Fletch, and given that it’s his last day, he feels he’s earned a little unethical sex.  So they go to the showers and start doing it, but THEN, Bea sneaks in like a teal ninja and steals his key card.

Anyway, key card in hand, Bea sneaks into the mail room and snags a box cutter.  How did she know it was there, given that she’s probably never been allowed in that room before? Who knows? Certainly not the writers.

When Fletch notices his card missing, he has a full-on panic attack, throttling Jess and screaming like a maniac.

Then Bea shows up, cool as a cucumber and hands it back to him.  Fletch is like “What did you even do with this?” And Bea is like “Nothing as illegal as screwing an inmate.”

Then, Bea rushes back to her cell (she must have only seconds before lunch is over) and tapes together a bunch of magazines to use as body armor.

So, with her loins girded and her blood slowed to the pace of a catatonic slug, Bea goes to face her foe.  They find a moment alone in the laundry (another battle/tryst parallel) and face off. The fight choreography all season has been heartpoundingly good, and this scene is the best one yet.

The only thing that’s unclear is how Bea transformed from wallflower housewife to Marrow from X-Men (invincible knife fighter).

Eventually, though Franky notices she isn’t stabbing anything other than US Weekly, so she slashes Bea’s forehead.  The most disturbing part of the whole fight is Boomer’s gleeful laughter from the sidelines. I hate what they’ve done to Boomer’s character this season, y’all.  She’s like a punchline of a joke only an asshole laughs at.

The fight ends when Bea jabs her X-Acto knife against Franky’s jugular, and she is forced to concede.

Having won, Bea hops up and slashes her own wrists with the knife, to the astonishment of all present.  And I do have to hand it to the show; I fancy myself a pretty savvy recapper, but I sure as hell didn’t see that one coming.