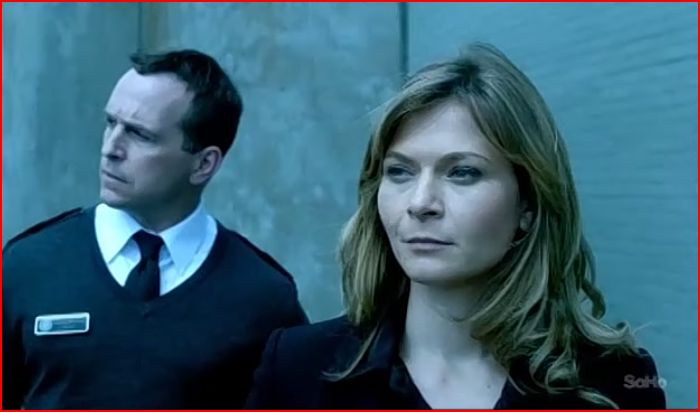 (This recap was originally published on September 13, 2013.)

True story: the night before my first Bomb Girls recap went online, I was sitting on my porch, drinking and contemplating how much my life was about to change. And it occurred to me that, momentous as it was, it probably wouldn’t take long for recapping to become mundane. Not only that, but for it to become something I complained about. And I was right; my life got immeasurably better as a result of getting to talk to my favorite people about my favorite stories, but I also got, you know, used to it. I don’t think that’s the result of any particular frailty on my part, it’s just that humans adapt to their dream jobs the same way they adapt to being in a high security prison. But sometimes, a character or an episode comes along that snaps me out of my routine, reminds me how lucky I am just to have the privilege to write about it. And Franky Doyle and Erica Davidson are two such characters for me.  And this episode is the one where Wentworth starts changing from a good show to a great one.

We open on a treadmill. Franky Doyle is running away from herself as fast as she can.

She runs like it’s a self-inflicted punishment, and as she runs she remembers how she got here. Back in the washed-out days gone by, Franky appeared on the Australian equivalent of Hell’s Kitchen, where the Australian equivalent of Gordon Ramsay loved to use her as a verbal punching bag. The first thing he does—and it’s something Jaqs does too—is call her “Francesca,” which is how you say “I do not respect or acknowledge the identity you have painstakingly carved out for yourself. You are who and what I tell you to be.” So right from the start, she’s irked, but she tries to swallow her rage in pursuit of her dream.

Gordon: So what will I be spitting into the trashcan today, Francesca?
Franky: Tapura vegetables.
Gordon: HAHAHA that is not how you say “tempura.” Geez, it’s like you completely had to raise and educate yourself without any help.  Now, if you wouldn’t mind, could you please cry? It would be great for my ratings.
Franky: I dunno. Audiences today only really respond to violence.

And with that, she knocks him to the ground and pours boiling oil all over his face.

In the prison laundry, where all the most dangerous inmates are left unsupervised with the stabbing and burning machines, Doreen is having a rough time.  It’s just really hard to work your sewing machine when your heart is aching about giving up your adoptive daughter and narcing on her mother. Bea offers to step in, but apparently switching jobs in prison is a very serious offense. Jaqs strolls over from her sweet steam-press gig and at first you think she’s going to stab Bea to death with the sewing machine, but instead she’s like “Hey bb, how’s your daughter?” Which is infinitely scarier. Franky steps in before things can escalate and even Jaqs won’t take on Franky and Boomer together, since they have kind of a Timon and Pumba thing going (I say this mostly because I love to imagine Franky riding into battle on Boomer’s shoulders).

After all the sheets are neatly steam-pressed (really, prison?), Franky is called to Erica’s shiny new governor’s office. We haven’t seen any of their earlier “tutoring sessions,” but from Franky’s behavior we can deduce that they were a lot like dates, whereas this meeting is a lot more like…well, a meeting.

Franky: Hey darling. Long day?  Me too. Now where’s our usual coffee and biscotti tray?
Erica: I’ve given up caffeine. It can cause heart palpitations, you know, not to mention jeopardize your career and heterosexuality. But let’s talk about you. I have here a letter from your estranged father. Would you like to read it?
Franky: What? No. What are you, my therapist or my girlfriend?
Erica: Neither? Let’s switch gears; where’d you get that scar on your boob?
Franky: So you’ve been staring at my boob.
Erica: I’m serious, Franky. If Jaqs is putting either your health or my job in danger I will take her down.
Franky: I’m sorry, I just can’t get past the fact that you’ve been staring at my boob. Also, don’t try and pretend like I’m just another prisoner to you.  You’re not fooling either of us.

Franky exits and returns to her cell, where she finds the photo of her father sitting menacingly on her bedspread.  “WHO TOUCHED MY STUFF” she bellows like a teenager, proving that there is a place for comedy even in the darkest shows.

To work off her aggression, Franky next hits the basketball court, where she is on a team all by herself. She has to be; no one else could come close to pulling off her team’s uniform.

Erica watches in a rapidly growing puddle of her own drool until Doreen approaches her, full of concern for Toni, who is in the middle of a very bad detox.

Both Doreen and Liz opine that keeping women in total isolation while the heroin drains from their bodies is probably not the best course of action, from a mental health standpoint. Ever the reformer, Erica goes to investigate and finds Toni in a state of acute misery. Right in front of her eyes, Toni attempts to choke herself on a baguette, and when Erica rushes in to help, Toni vomits all over her power suit. It is at this point that I would quit my prison job to do something less stressful, like tame lions, maybe. But not Erica. She goes straight to Vera and demands that detoxing prisoners be given access to peer support and toothbrushes. Vera counters that this will further alienate the already touchy guards, by forcing them to take on extra duties. It’s an intense test of Erica’s values and character, since she badly needs the support of the guards, but to her credit, she places the welfare of the prisoners above her own popularity. (Of course it doesn’t hurt that this helps further her plans for Toni, but she Erica would be the last person to admit this, especially to herself.)  As she struts out of the prison, full of righteousness, she is approached by a lumpy individual who claims to be Franky’s dad.