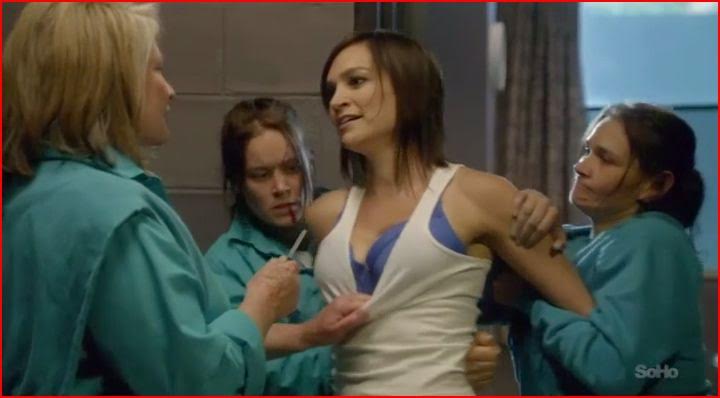 (This recap was originally published on September 5, 2013.)

Hello and welcome back to Wentworth (not recommended for viewers at risk for heart attack or stroke).  Last week we met Bea Smith, our protagonist, who decided to act out a country song revenge fantasy on her abusive husband by murdering him with his own sedan. She was prevented from executing this admirable plan by her daughter, Debbie, because kids get in the way of everything.  Even though the whole family tried to pretend it was a suicide, she still wound up in Wentworth correctional facility. There she met a host a fascinating and terrifying new friends.

Franky Doyle, Clittylicker In Charge: Violent, damaged, and a host of other cautionary adjectives which do absolutely nothing prevent women from falling in love with her.

Kim: Literally zero attributes other than being the aforementioned clit.

Jaqs Holt: The only thing better put together than her outfits are her evil plans.  Definitely not Team Franky (probably just jealous).

Liz Birdsworth: Desperately tries to be a mediator in her capacity as Peer Worker.  Let us know how that goes, Liz.

Boomer: She just doesn’t know her own strength.

And of course Doreen and Kaiya.

Meg Jackson: Former governor who went and got herself stabbed to death by one of her many enemies.

Will Jackson: The nicest fella to ever wield a truncheon.  Unless, of course, his wife getting stabbed somehow affects his outlook on life.

Erica Davidson: My girlfriend accuses me of gushing when I write about her so I will simply say: she is the prison social worker and she has hair, and a face, and other parts, to which you may assign your own qualitative values.

Vera Bennett: Always the deputy, never the governor. Should definitely consider taking her hair down.

Matthew “Fletch” Fletcher:  All we know about him is he looks like Pornstache without the ‘Stache.

We catch up to the investigation of Meg’s Murder through the eyes of Will. He’s watching the recordings of Bea and Doreen’s interrogation, which seems like a sad, but normal enough pastime for a grieving spouse.  The videos themselves are basically a parade of people saying “it wasn’t me.  I just fell into a pool of her blood.”  But there’s something curious about the way Will watches them; he skips straight to the good parts like it’s a DVD of Room in Rome.  And then the camera pulls out and we see that his apartment is full of wilted funeral flowers, and that Will has been at this task for weeks.

Also dwelling on the events of the riot is Franky, who is busy fingering her scar and answering fan mail. At this point in the season we have no idea why Franky is getting fan mail, unless it is just for her face, which actually seems rational enough. She’s distracted by Doreen, who wants everyone to come celebrate Kaiya’s birthday. If you wondered last week why any parent would bring their child with them to prison, the answer is: because that child is capable of distilling all the joy in the universe into the words “hot potato.” And it’s clear how much all the inmates need her, because if you can make a child happy simply by dancing to The Wiggles, then clearly you’re not such a bad person after all.

Outside the prison, poor Vera wades through a crowd of reporters to get to the door. They want to know if she’s made any progress on Meg’s murder, but she refuses to talk to them, just repeats “I am rubber, you are glue” in a voice so soft not even she can hear it.  Erica is like, “Girl, why don’t you just talk to them” in the same way a hawk might ask a mouse why it doesn’t simply fly away.

In the prison yard, bathed in the blue light which apparently illuminates all of Australia (correct me if I’m wrong), Toni is all zombied out on drugs, and doing the world’s worst job of hiding it.  Doreen orders her to flee while she and Kaiya distract Will. They give him a “welcome back to the job after your wife got stabbed to death” card, which he RIPS UP LIKE A JERK. Also he says that if Doreen doesn’t find out who killed Meg before bedtime, he’ll make sure Kaiya is sent away forever.

The other mother-daughter storyline this week is between Bea and Debbie. Every single day Bea calls home to try and speak to her child, and every day her calls go unanswered. Finally Bea’s horrible husband comes to visit her and says that Bea’s calls are disruptive, and Debbie doesn’t want to talk to her anyway. BUT REALLY he is just holding the phone over Debbie’s head out of pure spite/the orders of Satan. The visit deeply shakes Bea, who is torn between guilt at abandoning her daughter and pain at feeling similarly abandoned.

After three weeks of watching Vera titter through staff meetings like a hummingbird on the verge of a nervous collapse, Erica Davidson can no longer contain herself. She takes the prison GM on a tour of her personal accomplishments, which include vocabulary lessons and barista training. She’s all about “rehabilitation” and “empowerment,” words that set my little liberal heart all aflutter.  Her proudest achievement, though, is Franky Doyle, to whom she has been giving “private lessons” for over a year. Franky SHAMELESSLY flirts with Erica in front of the GM.

Erica just blushes and purrs and the GM smiles benignly and rushes home to start his first Frerica fanfic. (I know “Frerica” isn’t a perfect fit, but it’s the best we’ve got).

Doreen decides to make Bea the first stop in her quest for Meg’s killer, which makes sense since Bea was the one finger painting with Meg’s blood. But Bea denies everything, and Doreen isn’t really the stabbing type, so she goes to Kaiya’s room and collapses in a state of despair. It is in this state that she flashes back to a time when the colors were even more washed out than they are in the prison yard.

Doreen, in her life before Wentworth, was a hard-partying young woman, who wouldn’t even let her pregnancy get in the way of her ecstasy/booze/McDonalds habit. The flashback concludes with a glimpse of how that story ended: at an ER.

Back in Wentworth, Doreen explains what Will threatened to do to Liz and Bea.  Bea confronts him about it.

Bea: Hey Mr. Jackson, sorry about your wife and everything, but I’m pretty sure “threatening children” isn’t one of the official five stages of grief, so why don’t you leave Doreen and Kaia alone.  Anyway, you’re barking up the wrong tree, because I didn’t kill her.

Will: Fine.  If you didn’t kill her, then find out who did.  WHILE IN THE SLOT.

Bea: That doesn’t even make sense.

But nothing Will does makes sense these days. In his mind, because any of the prisoners could have killed Meg, all of them did. So he’s surrounded by his wife’s murderers, endlessly smirking and endlessly getting away with it. Fletch intercedes and saves Bea from the slot, and tells Will to go back home to his wilty flowers and his interrogation tapes.

That night, Doreen and Kaiya are busy being adorable, which is getting in the way of Toni, who is busy being a drug addict. Toni yells at Doreen to stop pretending she’s Kaiya’s mom, which came as a huge shock to me the first time I saw it. This revelation sends Doreen straight back to flashback mode, where she recalls learning that she had suffered a late-term miscarriage, and being forced to deliver her lifeless daughter.

And now is as good a time as any to say that Shareena Clanton is the kindest, warmest heart of this show, and in her fear and remorse, reminds me of all the Doreens I have known.

Also living in the past is Will, who is blasting Bon Iver and scrolling through pictures of Meg, when he notices something wrong. In life, Meg was never to be seen without her gold bracelet, but it was missing when her body left the coroner’s office. He deduces that her killer must have stolen the bracelet, and immediately begs Vera for a full search of the prison. She obliges him, the search comes to nothing, she looks like a fool, and Erica Davidson seizes her opportunity. She calls in a favor to an old reporter friend.

The next morning, the prison wakes up to Erica’s face on the front page of the local paper.

The headline reads: “Let’s Put This Lady In Charge Of Everything.” Vera is all “But…I thought we were friends.” And Erica has the audacity to act offended that Vera would suspect her of talking to the press. So maybe I sorted her as a Hufflepuff too soon, because this is some serious Slytherin shit.

Elsewhere, Doreen lets go of the last of her selfishness. When she goes through Kaiya’s pictures and finds that they all have a distinct prison motif, she realizes that she isn’t helping her by keeping her here. When Toni shows up high on heroin, Doreen makes sure she is caught, which ensures that Kaiya is sent to live with her grandmother. And normally, I would say this was a storytelling mistake, since having a child in a prison is a constant source of tension. But in this case, I was practically breaking out in hives with worry, so I’m relieved she will be safe.  This show is stressful enough without little hot potato being in danger all the time.

Outside the Governor’s office, Erica is watching Vera get sacked like Tracy Flick watching the votes get counted. She is interrupted by Steven, the vocabulary/barista/dance teacher she was showing off earlier.  It turns out that he was providing Toni with her heroin, and is now panicking that his cover will be as blown as…his arrangement with Toni.  Erica orders him to find a career change and fast, and promises to cover up his wrongdoing. Is it an effort to save her rehabilitation program or her shot at becoming Governor? The thing is: it’s both. Wentworth deals in gray areas, and none are grayer than Erica. She genuinely does care about the women she oversees, but she is also a ruthless and cunning politician. For the time being, she thinks she can serve both ends at once, but the strain is bound to wear on her.  And you know what the best cure for strain is? LESBIAN SEX, THAT’S WHAT.

Taking a cue from Doreen’s good parenting, Bea decides not to give up on Debbie, and finally manages to get her on the phone.  Erica accepts the position of governor, and Franky watches her speech on TV, realizing for the first time that everything between them is about to change.

So which Hogwarts houses do you think our leads belong in?