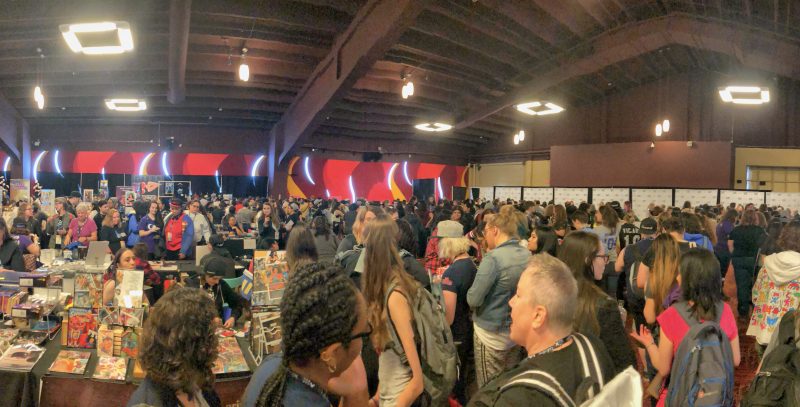 Last year, your favorite anxious autistic asshole skulked around Clexacon like a cat in a rocking chair factory. This year, it was once more unto the breach. Did she succeed?  Did she make friends? Did she throw up all over the hotel? Time and this review will tell!

Oh my god. The lines. Lines everywhere. This was not a queer media convention, it was a line convention. Everything, everything, had lines- the autographs, the panels, the bathroom, the escalators, there were lines to get in lines! The pre-party badge pick-up was one giant two-hour line. I couldn’t go to half the panels I wanted to and had to give away several prepaid autographs and photos because I spent 60% of the convention in lines. Last year, I wandered up to autograph tables on a whim; this year, I lined up over an hour in advance just to get in, booked it to Chyler Leigh’s table, and still missed the cut-off.

I almost broke into tears when I got home and realized I wouldn’t have to wait in any more lines.
The lines had several surprising consequences. For starters, my back hurt like a motherfucker. By Sunday I was dragging my carry-on around the hall because I desperately needed something to sit on while in line. The lines stretched out so far that whether you were in the right line was a real and frequent source of anxiety. The lines meant the poor stars stayed much longer than planned and sometimes went without food or bathroom breaks because they felt so bad for the hundreds of people still in line. The greatest miracle I had all convention was the serendipity of being the very last person they allowed in line for Emily Andras. 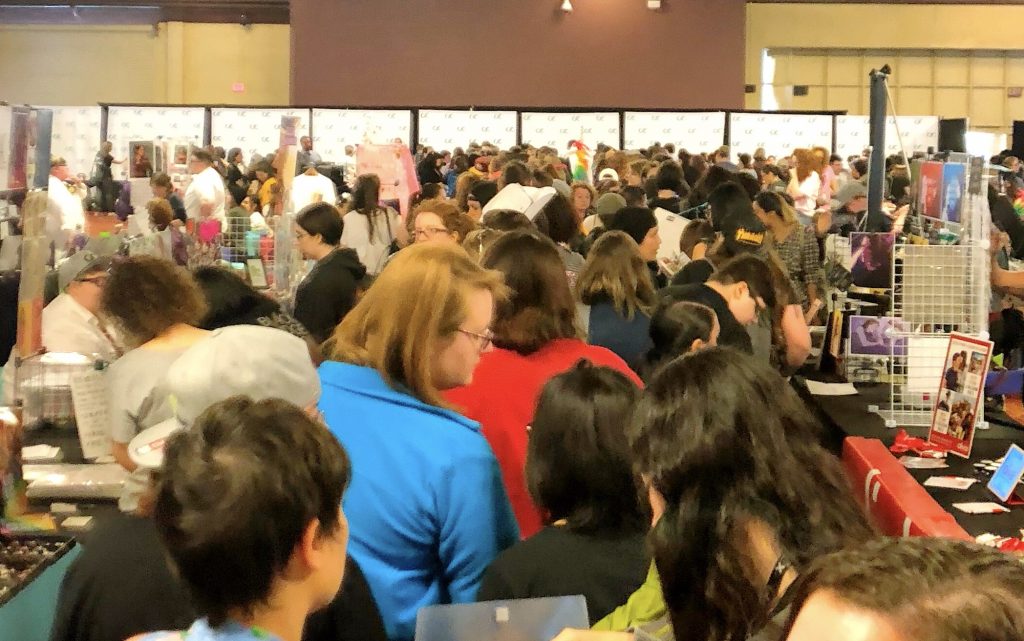 Which line am I in? Oh, who remembers.

In perhaps the greatest irony, the lines meant that the lesser-known stars of the convention got screwed. You’d think that having more stars would relieve the pressure on the lines, but instead it meant the niche stars didn’t get nearly the attention they deserved. I’d been hoping to thank Dot-Marie Jones her for work in Glee, but instead I could only stare wistfully at her table from across the room as I waited for my prepaid Lost Girls autographs. The Twitterati were upset that Nafessa Williams, star of Black Lightning, didn’t get nearly the lines or panel attendance the other guests did. The problem wasn’t that people didn’t love her work, or didn’t want to show her support–it was that her show started in January and people were stuck in line for actresses they’d loved for years. Lines were the uncontested villain, bastard and plague of this year’s convention.

And yet, one of the most anxiety-inducing experiences of the con was at one of the few events that didn’t have lines. That’s right, folks: I once again braved that stresspool of socialization called Cocktails for Change. It was obvious within the first five minutes that Clexacon’s general air of good-natured chaos was quickly deteriorating into fight-or-flight grouchy chaos. I’d totally given up on getting a Chyler Leigh autograph (lines) so she was my #1 priority at Cocktails. I almost had a panic attack as more and more people crowded closer and closer to her, invading each other’s personal space and waging silent wars for dominance. 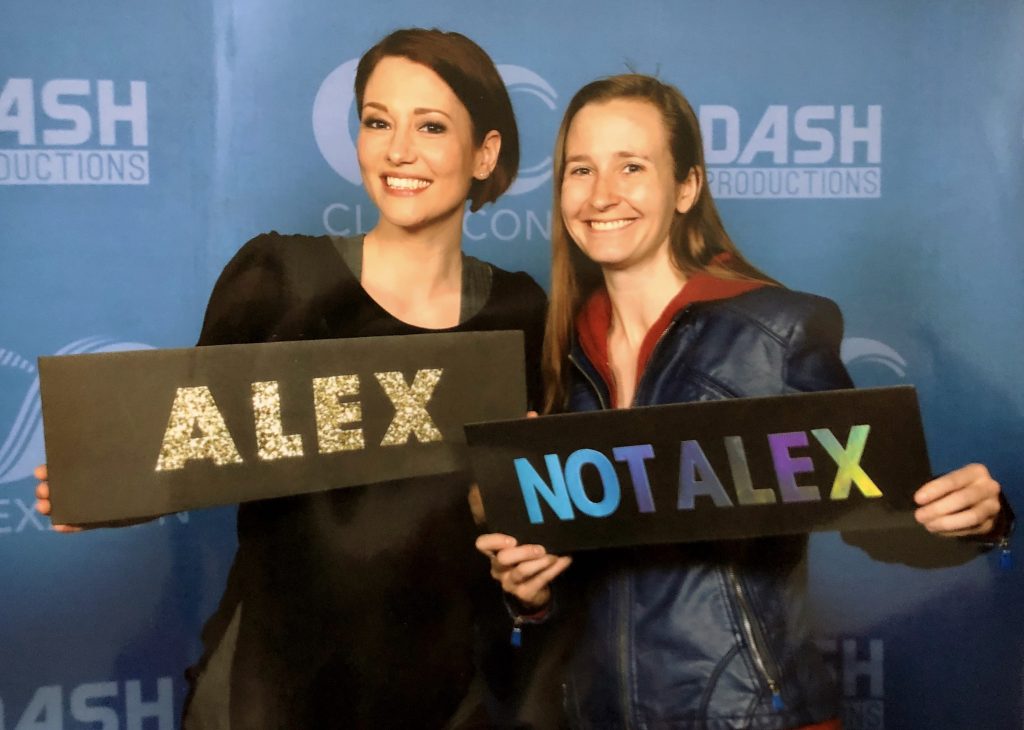 Oh well.  At least I got my photo!

One might say: “Isn’t turned-based socialization what the Meet & Greets were for?”  Nah bro. I went to two Meet & Greets. They were both kind of weird and, for me, not very fun. 😕 A ~15:1 ratio in half an hour didn’t work very well, nor did the knights-of-the-round table seating arrangement. It wasn’t an intimate interaction by any stretch of the imagination, and the stars seemed to feel understandably awkward trying to go around the room and address each individual’s burning questions while being painfully aware fourteen other people were staring.
I did learn Natasha Negovanlis likes really bad puns. 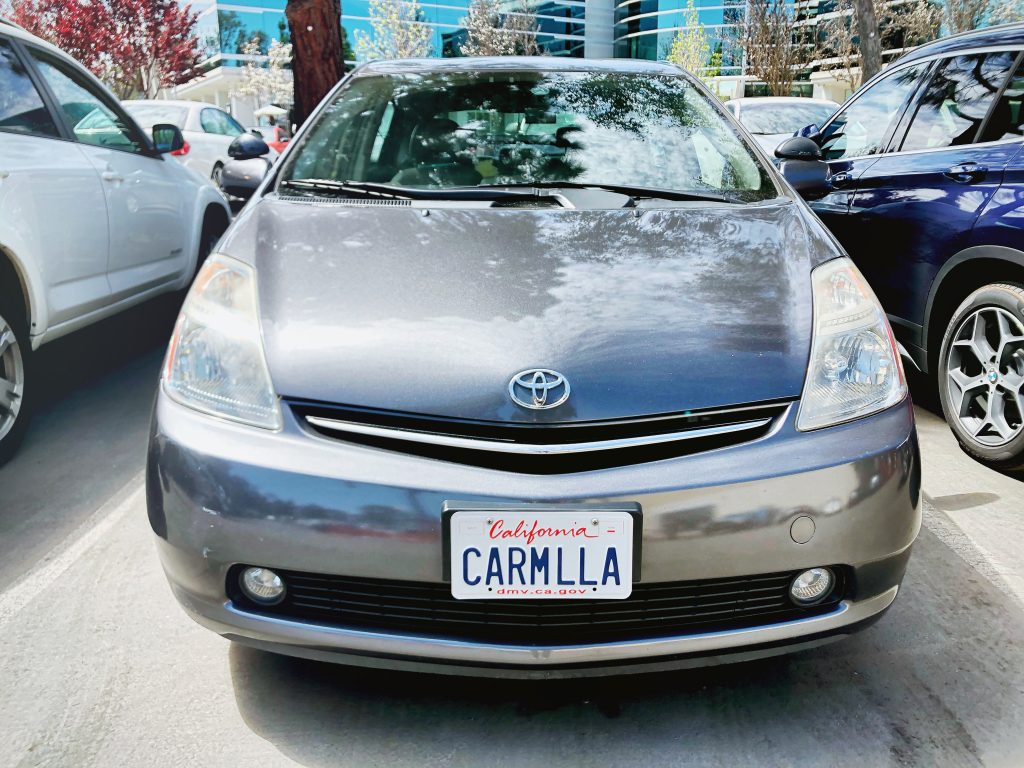 Too bad I didn’t get to show her my car.

This was in stark contrast to the breakfast, which OH MY GOD WAS AMAZING 11/10 WOULD DO AGAIN. For $250, I’d rather they replaced Cocktails for Change with a second breakfast (hobbits!), or dinner, or tea, or elevenses, or any other culinary excuse to recreate this magical mix of ingredients. You got a full hour and a half to bask in your heroine’s presence, and it was way easier to carry on side conversations and connect with the other people at the table. My half of the table was the tits, yo; Shelby, Ashley, Ryan, Flora and I are all Facebook friends now, ran into each other a bunch for the rest of the convention, and genuinely had an awesome time. We bonded enthusiastically over not-very-good avocado toast and our heartfelt, starry-eyed and not-at-all-creepy adoration for Elise Bauman. 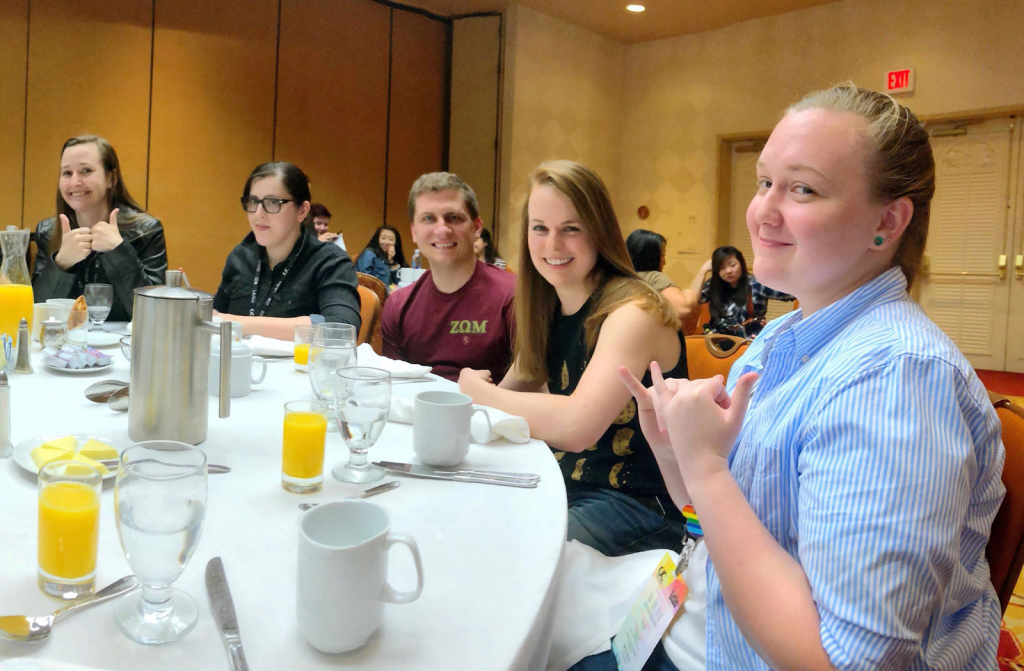 Confession time: Elise is my favorite. Exponentially. My two-minute conversation with her last year is far and away my single most treasured memory of the entire quasi-miserable weekend, to the point that I got the resulting autograph custom framed and feel mildly ashamed but defiantly proud to have it hanging in my living room. It is almost ineffable how much joy interacting with her in person brings me. 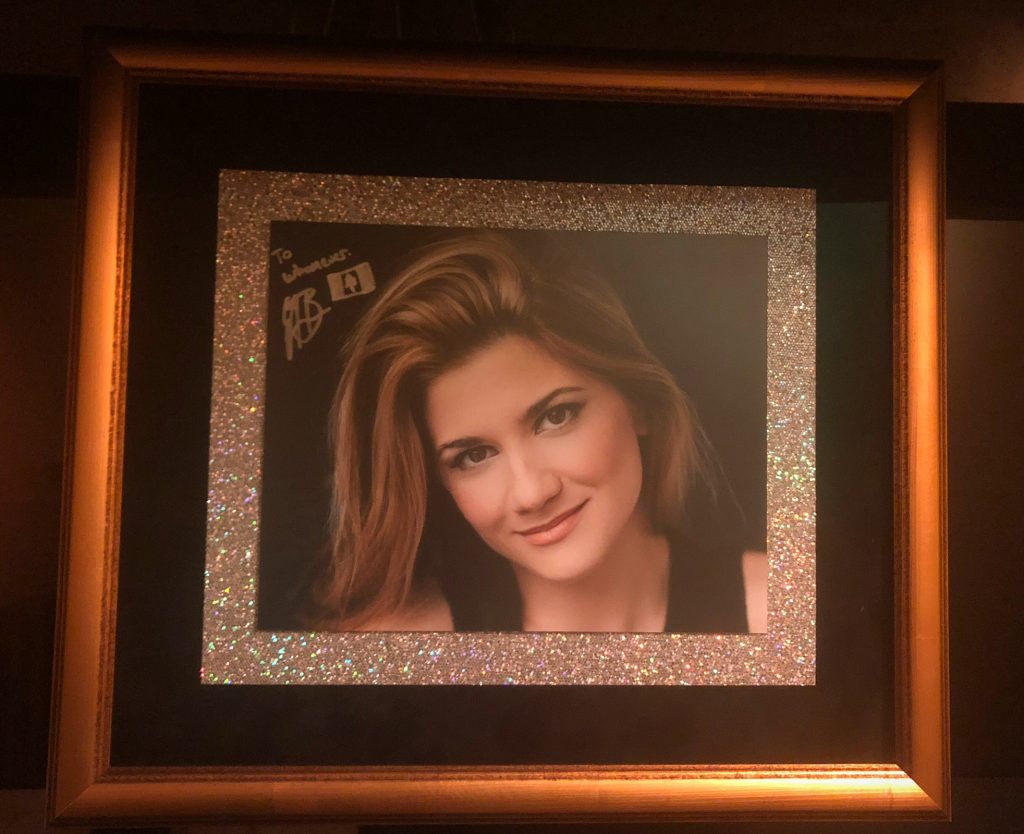 This is probably because she laughs at my jokes.

But for real, whereas just about every other star I’ve met seemed vaguely uncomfortable in my presence (I mean, to be fair, it’s me we’re talking about), Elise comes across like she’s trying to make friends. She talks to you like you’re a normal person and there’s not this weird power dynamic at play. Many of the stars are clearly “on”, trying to act like they’re thrilled to be there every gosh-darned second of the day. After hours of stranger-danger, they’re quite reasonably worn down and struggling to hide their discomfort. In contrast, I’ve seen Elise freely admit to not being happy or comfortable all the time. It’s refreshingly authentic. She even confessed in hushed tones that she’s not a huge fan of Hamilton, which I’d say instantly endeared her to my heart except she already had a condo there.

If she is acting, she’s doing a waaaaay better job than most and I’m glad I voted for her a bajillion times for the Canadian Screen Awards. #SorryMelanieScrofano #NextYear

Don’t get me wrong- I haven’t spent much time with the rest. They may simply not like me! (100% fine and well within their rights). That said, Kat Barrell is super nice and enthusiastic and I’m bummed I didn’t get to hang out with her this year (curse you, lines!). Dominique Provost-Chalkley is intensely personable and I hope she becomes a politician because I swear to God that woman could charm a table. (She actually asked for my name at Cocktails. It only occurred to me afterwards that this was probably so she could get a restraining order.)  But Elise is relatable and authentic and interested in you, but not so interested that you feel it’s her job. Hopefully, future cons can help the other stars feel as comfortable to be themselves, and empower them to honestly speak up and say “I’m tired, y’all, can I get a break?” (If I can offer a suggestion to the organizers: many of them seemed to like alcohol.)

Speaking of which, my other highlight of this year’s convention starred alcohol. In not the best of ways. But it reinforced the supportive nature of this community and the spirit of Clexacon.

I have a lot of medical issues. I take fifteen pills a day on a good day, and the stress and excitement of the convention meant I was taking Dramamine three or four times a day. In retrospect, I probably should have considered this prior to Ascension, the Saturday night club event. Can you see where this is going? I didn’t.

I sprang for table service, which was expensive AF but a bucket list item for me. Ever since I was a little girl on Wall Street, I’d cockily wanted to show the broey investment bankers I could play on their level and pay ten times the market price for a bottle of Grey Goose and shitty mixers. So it was super fun (and made me a little proud) to invite my new friends to join the table and hang out.

What was NOT super fun was very, very quickly getting Way. Too. Drunk. In fairness to me, I later checked with four eyewitnesses and they all agreed that I went from “totally fine and having a fabulous time” to “WHAT THE FUCK THINGS ARE HORRIBLY WRONG” in the blink of an eye. Literally, one person went to the bathroom and by the time they got back they were like “Where is Alexandra?” This was because Elaine Atwell, my personal hero, spotted the instant shit went south and got me the fuck out of there, just in time for me to throw up all over the Tropicana. (Editor’s note: This is essentially accurate.)

The good news?  I’d bought a brand new dress for the occasion, and miraculously it escaped totally unscathed. I was the hottest mess on the strip. I also have a sneaking suspicion I am not the first person to recycle vodka at the Tropicana.

The amazing news?  A stranger I’d met the night before on the Fandras Fanbus helped Elaine get me to my room, held my hair back for hours, and stayed to make sure I was okay.  This was despite the fact that I threw up on her. (And also despite the fact that my drunken Mr. Hyde apparently likes snapping suspenders). I’ve booted and failed-to-rally a lot in my day, but only my very closest friends have gone anywhere near as far to make sure I woke up fine in the morning.  And they don’t even wear suspenders.

But that’s the kind of con this year was. I’d spent a whole year doggedly commenting and trying to make friends on Twitter, but it was the people I met at Clexacon who made me feel welcome and supported- something I didn’t have last year. Speed-friending set such a positive tone for the whole thing that I even made friends in the bloody badge pick-up line. Don’t get me wrong, all that Twitter investment helped a bit and I have to recommend it (demoralizing as Twitter can be at times). But the organizers did a beautiful job of taking feedback from last year and using it to make many of this year’s nervous, lonely singletons feel wanted and included.  This year truly felt like a safe space.  A safe space for people who don’t normally have a safe space. A safe space for characters who need bulletproof vests. And for the people who love them. As much as I whine and complain, the organizers deserve a standing ovation for creating that space.

So I can honestly say I had an amazing weekend. Was I too ambitious?  Absolutely. Did trying to plan my schedule in advance take six hours? And then some. Did I shout “Fuck, finally!” when I checked off the last must-have from my to do list at the very last second?  You bet your damn bippy I did. But despite the growing pains (and the considerable back pain), I’d get in line for Clexacon again. 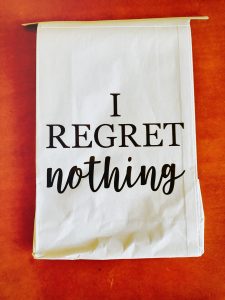 Alexandra Ressler has read every #Supercorp fic on AO3, up to and including the ones without grammar. If you enjoyed this rant, please follow her on Twitter at @aeressler so she isn’t just screaming and flailing into the void.