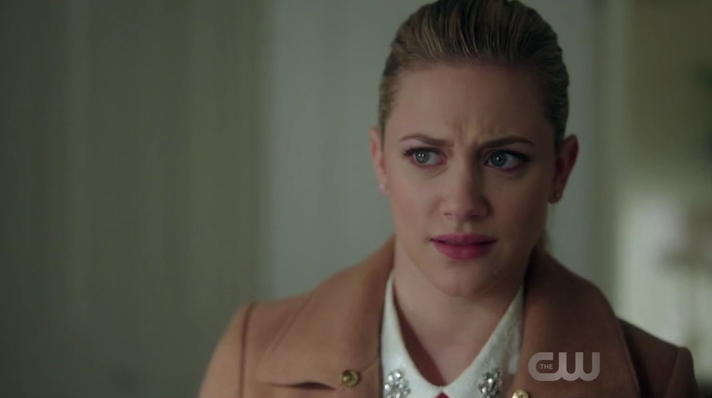 Hello and welcome back to Riverdale! I am so glad to be back to recapping a show I hadn’t realized I had missed so much until I watched this episode in the bathtub and laughed so hard I nearly drowned. (By season four, I guarantee someone will have died in that exact way.)

I really did miss Riverdale, but I did not watch the Christmas episode because I was busy and nothing of consequence ever happens in Christmas episodes, right? Wrong, as it turns out. As this week’s “previously on Riverdale” informed me, the show took several sharp turns while we were away.

-Archie and Veronica broke up!

-In the tiny window of time during which Archie and Veronica were broken up, Archie and Betty made out!

-Archie and Veronica got back together, which I am happy about. As unconventional a choice as it is for this show to eschew the Betty-Archie-Veronica love triangle, which is the only thing most people know about the Archie comics at all, I think it’s more interesting to watch these characters try and make their relationships work than to watch Betty and Veronica play badminton with Archie’s heart.

-Cheryl’s mom took up sex work to pay for the family manor to be rebuilt. (I know “sex worker” is the preferred terminology nowadays to indicate that one respects the people who engage in that business, but would it just be okay for me to say that at the outset and then adopt Cheryl’s “woman of the night” language? “Sex worker” feels like “civil union-ing” the entire profession, rendering it dull and clinical and robbing it of all the velvet and lace joy that Cheryl’s mom is taking in her newfound calling.) 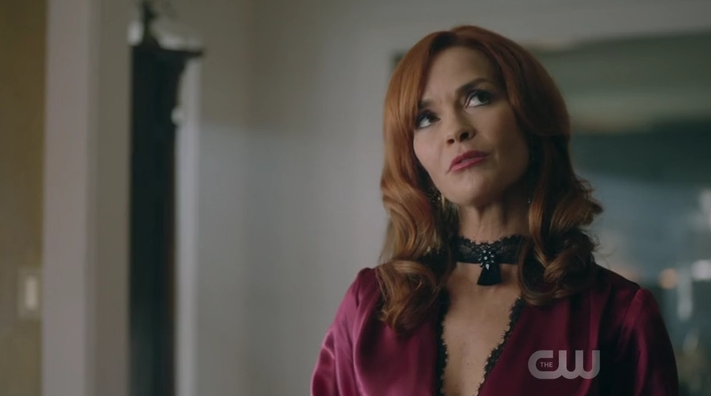 -The kids caught the Black Hood, who turned out to be the creepy janitor all along. I have a strong suspicion that this was not how the showrunners had originally planned to wrap up this storyline, but, much like the Ms. Grundy fiasco, one thing I really respect about Riverdale is its ability to recognize the things that aren’t working and cut them off as cleanly as possible.

-Mayor McCoy gave the order to shut down Southside High, because of something to do with Hiram and Hermione’s development plans. The real estate angle here is pretty dull, but I am deeply excited about Cheryl and Toni Topaz to have adjacent lockers, with all the symbolism that implies.

This week we open with the reassurance that things in Riverdale will be getting back to normal, post Black Hood. And that certainly seems true. Veronica goes off to school, giving her parents a kiss on the cheek and a promise that she shall defend her family’s empire while simultaneously vying for the throne. Archie digs up his guitar, which I know we had all been missing SO MUCH. 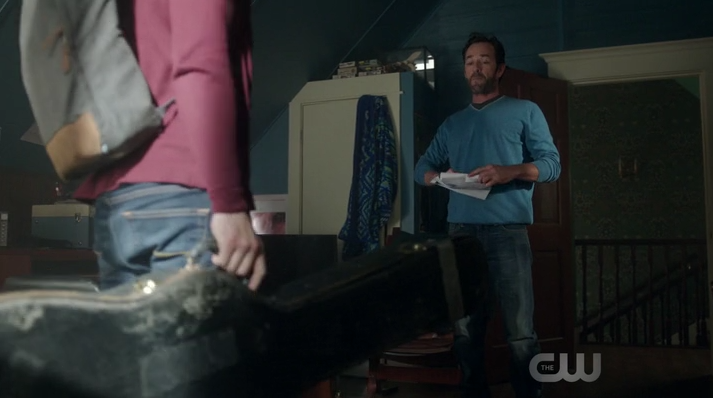 OH I SEE YOU FOUND YOUR GUITAR WHERE I HAD HIDDEN IT UNDER THAT PILE OF BOXES. THAT’S…THAT’S GOOD.

Archie’s dad briefly wakes up from his perma-nap to find that someone has paid his hospital bills, and that someone could only be the Lodges, whose generosity is always the bait that hides the hook. Archie isn’t inclined to think too hard about it until he is approached by a mysterious man who introduces himself as Special Agent Jared Kushner. 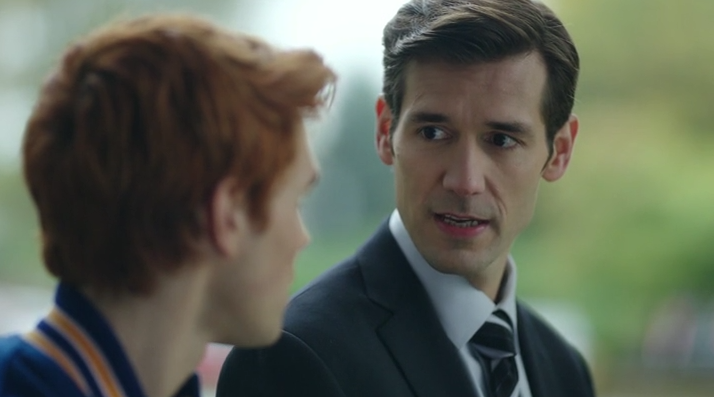 WELL MY FATHER-IN-LAW FIRED THE REST OF THE FBI, SO I’M WEARING A LOT OF HATS THESE DAYS.

Special Agent Jared Kushner is investigating the Lodges’ criminal activities, and tries to recruit Archie to learn about their involvement in Nick St. Clair’s unfortunate “skiing accident.” Archie initially balks, until Special Agent Jared Kushner warns that Archie’s dad could be under investigation too. After briefly trying to get information out of the Lodges (Archie you sweet lamb, you’ve got to give up on that strategy), Archie decides to pay Nick a visit in person. To do this, he needs an excuse that has nothing to do with the Lodges, so he offers to get another check for Cheryl to replace the one her mom shredded. Cheryl’s personal feelings on taking money from her would-be rapist have evolved recently, since she’s about five minutes away from starting a KickStarter called “Rebuild My Mansion So My Mom Will Stop Walking Around The House In Negligee and Sighing.” 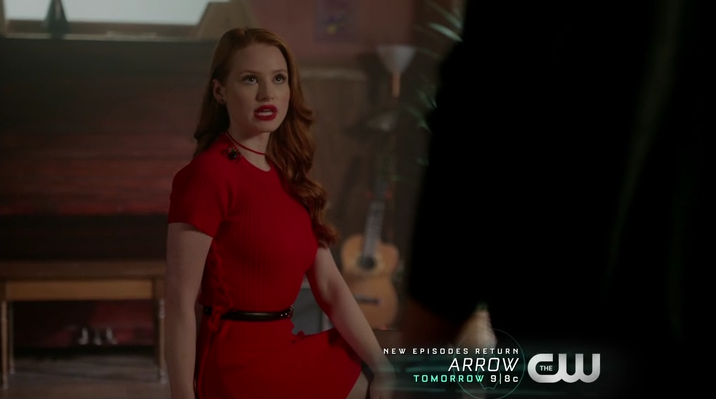 I JUST ALWAYS THOUGHT WHEN I LIVED IN A BORDELLO IT WOULD BE DURING MY STUDY ABROAD YEAR IN PARIS, AND I WOULD BE RUNNING IT.

However, she suspects that Archie’s motives have less to do with a sudden fit of altruism and more to do with wanting revenge on Nick for assaulting Veronica. Problem is, Archie didn’t know about that until Cheryl spilled it, which, to her credit, she is immediately horror-and-guilt-stricken by. Having learned this, Archie is pretty angry (and inexplicably dressed up as Jason) when he visits Nick and his two broken legs. (Archie says “you must really suck at skiing” which is a great, savage burn that I hope I have occasion to use someday.) 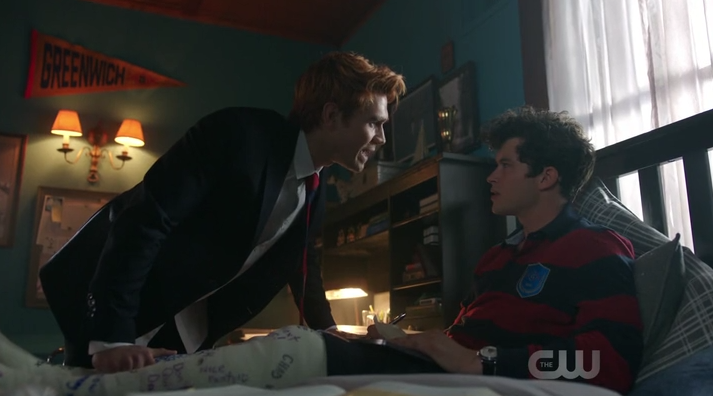 HOW BOUT I SIGN YOUR CAST “NICK’S A DICK?” SORRY, THE SKIING THING WAS MY ONE GOOD LINE.

Archie successfully gets Cheryl her check, but is unable to get Nick to admit that his legs were broken by the Lodges. Archie returns to Riverdale and comes at least partially clean to Veronica. He doesn’t tell her about the FBI investigation, but does admit that he and Betty kissed on the Christmas Eve of a Thousand Twists. Veronica takes this well and thanks Archie for his honesty. Unfortunately, Archie can’t quite believe that Veronica is being perfectly honest with him, so he agrees to keep helping Special Jared Kushner. Their dialogue goes like this

ARCHIE: I’ll help you, but you have to promise that my dad is safe.

ARCHIE: Also, if you could promise that nothing bad ever happens the kids in Stranger Things.

SAJK: You know I can’t do that.

ARCHIE: Okay, but then answer me this: in your expert opinion, do you think the janitor was really the Black Hood?

SAJK: I mean, no, but we all just want to move on from that, so leave it.

And readers, I really hope they leave it.

GREAT NEWS, MOMMY! YOU CAN STOP HAVING SEX WITH MEN FOR MONEY! 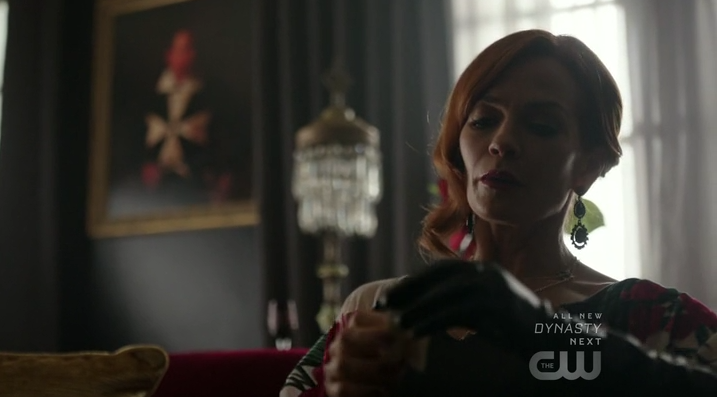 THAT’S WONDERFUL! GOING FORWARD, I WON’T DO IT FOR THE MONEY AT ALL. IT’LL JUST BE A NICE BONUS.

Commence countdown until Cheryl seeks comfort in the arms of Toni Topaz.

Next up, this episode sees the Southside Serpents bidding farewell to their derelict high school and hello to Riverdale. You’re kind of expecting them to make a huge stink about it, but they all seem genuinely grateful to be getting a decent education at a school where the teachers aren’t druglords and the dominant decorative motif is not “chainlink.” Everyone is being pretty mature about it except Jughead, who is loath to return with a place with primary colors and sports and computers instead of HONEST OLD TYPEWRITERS. 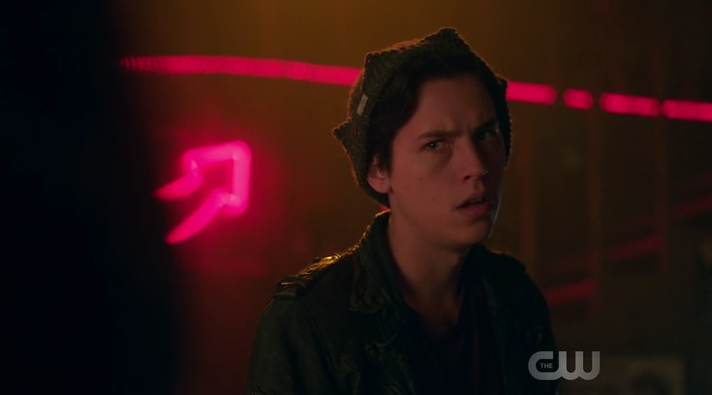 For some reason, the issue around which Jughead gathers all his hurt feelings is his Serpents jacket. Principal Weatherby orders that all gang-wear is forbidden within the confines of his high school (which, again, every other Serpent is like “sure, makes sense”), but Jughead refuses to accept this infringement on his first amendment rights. He insists on wearing his “skin,” to school and is promptly suspended, prompting eye rolls from all parties. 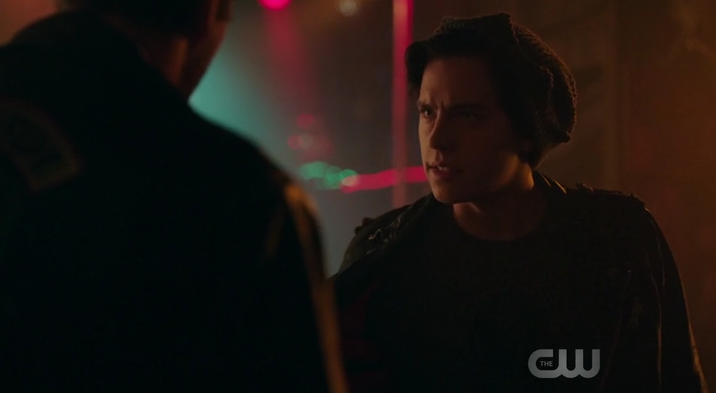 A SERPENT NEVER SHEDS ITS SKIN! 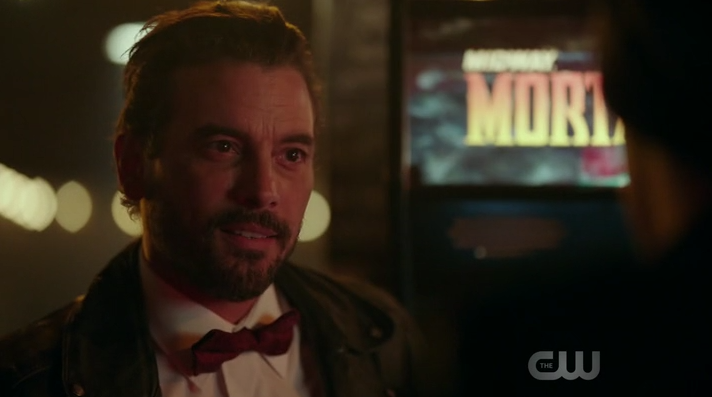 THAT IS LITERALLY WHAT SERPENTS DO, BUDDY.

To be fair, the outfits that the school makes the Serpents wear are pretty horrific, and Veronica makes it her personal mission to pull a Clueless on them to stop this needless atrocity. 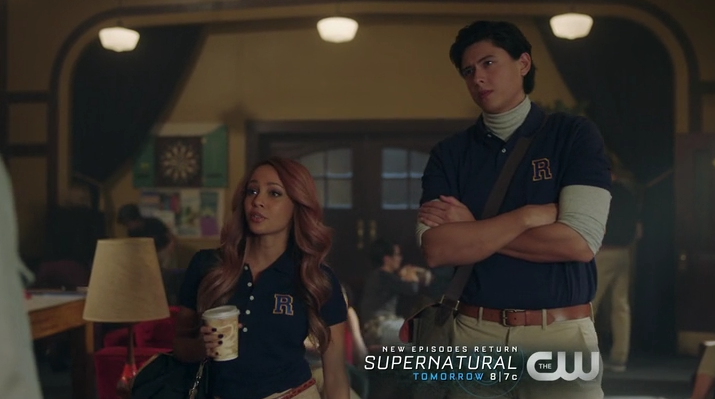 LIKE, I’M HOT AS FUCK, AND I KNOW I’M NOT PULLING THIS OFF.

Eventually Toni and F.P. persuade Jughead to return to school, where he starts a club called “Swords and Serpents,” (a play on Dungeons and Dragons) to let his gang meet under the authorities’ noses. I’m not sure what he hopes to accomplish with this, since he never had much of a taste for any of the Serpents’ illegal activities, but hopefully the show is going somewhere with it.

Finally, this week reshuffles some of the Coopers’ long-lost children. First, Polly makes a brief appearance to announce that she’s had the twins, they’re fine, and she intends to live on the Cult-Farm rather than returning home. She has chosen to name the kids “Juniper and Dagwood,” which was the part of the episode where I nearly drowned laughing at how persistently unwell Polly is. 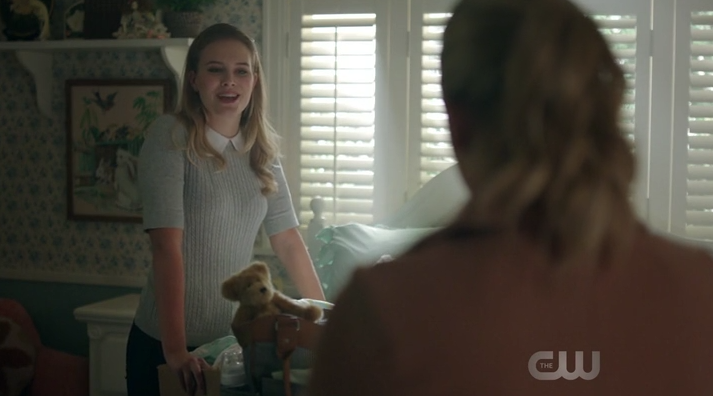 I WAS GOING TO NAME THEM STORMY AND MAGAZINE, BUT TRUMP HAS TO RUIN EVERYTHING.

After that, Polly goes back into mothballs, doubtlessly to be pulled out again when the twins are suspected of their first murder. Polly’s departure forces Alice to spin her weekly “Wheel of Emotions,” which happens to land on “deep maternal guilt.” To alleviate her mother’s suffering, Betty, who, lest we forget, recently referred to her mom as a “fiend” decides to find the brother her parents gave up for adoption all those years ago. This doesn’t prove to be too difficult, and Betty quickly finds her brother living in a flophouse and working as a “fantasy fulfiller.” Betty’s brother, who will apparently now be a part of all our lives, goes by “Chic” and looks like a PERFECT GENETIC COMBINATION of Dave Franco and Bill from Bill and Ted’s Excellent Adventure/Bogus Journey. 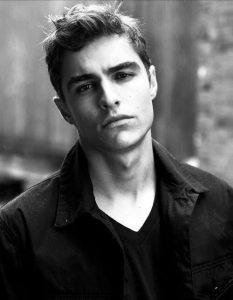 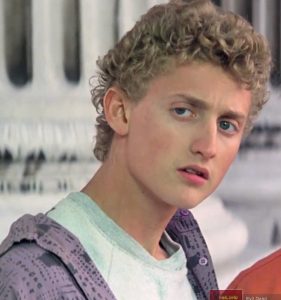 Chic’s unwellness is on a whole other level than Polly’s. Polly is like Amelia Bedelia, just hiding in attics and guilelessly joining cults, but never really posing a threat to anyone but herself. Chic is like the least-adoptable stray in the shelter, the one that grew up in a meth lab and whose owners taught it that “stay” means “attack” and when your friends bring it home you say “how amazing of you” but you think “what exactly are you trying to prove?”

It turns out that Chic has known all about his biological family for years, and has even driven by the house a few times, but figured they wouldn’t want him. Of course, he was right about that, but now Alice has fully committed to being a mom (until next week) and Betty needs to take on a new project now that the Black Hood is gone. So they bring Chic home to Riverdale, where he immediately catches up on all the quality brother-sister time he’s missed. He just makes the somewhat odd choice to catch up on it by standing over Betty’s bed while she’s asleep. 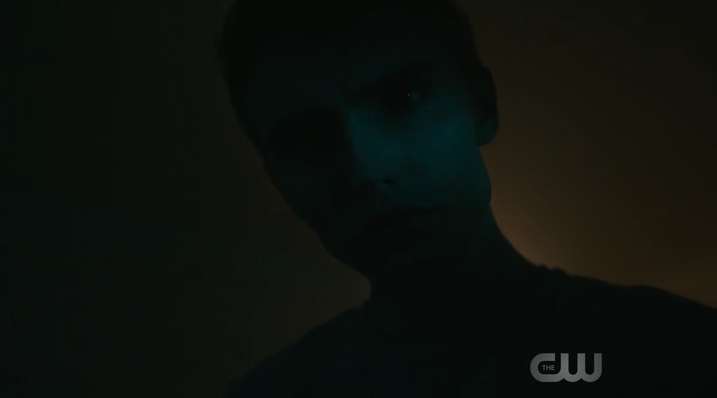 I don’t think Chic is going to be a real villain, but I plan on enjoying every minute of the show using lighting and this actor’s bone structure to confuse us. See you next week!