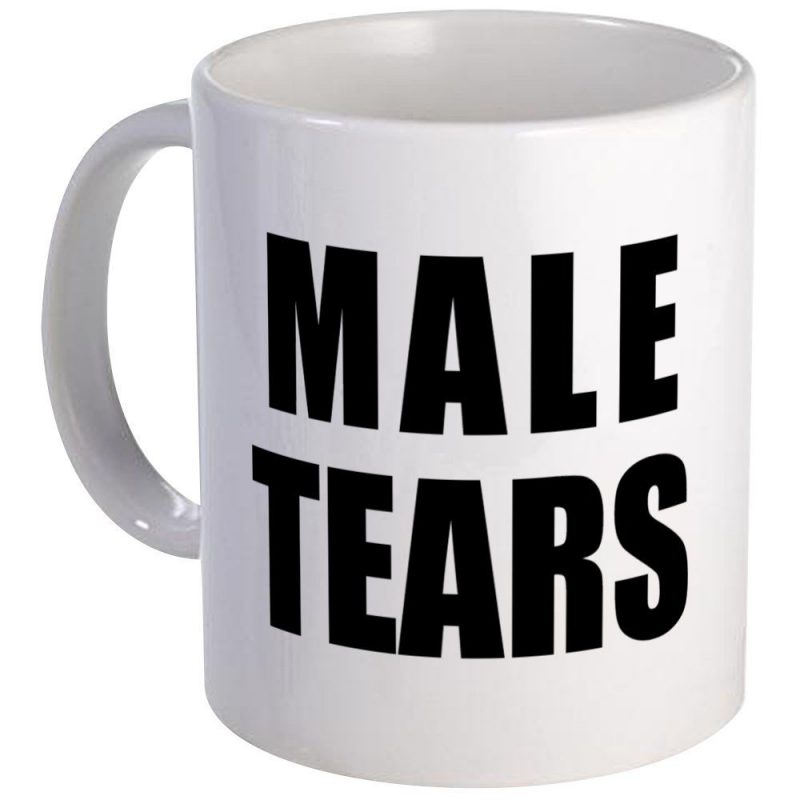 The first time I ever encountered the word “misandry” I was well out of college and I had to look up what it meant. I read it on The Toast, the dearly-loved and much-missed bookish girl hangout site, and in its original context, I adored it. I don’t remember the specific article where the word and I met, but The Toast trumpeted its own misandry often, as a trollish response to the (trollish) criticism of men who felt bizarrely threatened by any joke at Winston Churchill’s expense. The word as I encountered it then was one of the great internet in-jokes. It said, “Yep. We hate men. You caught us. Look, we’ve already put the handcuffs on ourselves.” What made that early misandry so funny and so invigorating was twofold:

They were good times, those early days with misandry and coffee mugs labeled “male tears.” But times change. The Toast shut down. The novelty mug companies started peddling all sorts of tears—male, feminist, liberal—they were agnostic as to the labels. And the joke of misandry spread outwards from a group of intensely clever people to the populace as a whole, where it was both told and heard by people who did not fully understand it, and where it further poisoned a discourse already tending towards extremes of hate, mistrust, and denials of humanity. In our current social media climate, I read “I hate all men” on an almost daily basis, from some of the smartest, kindest, wittiest women I know, but I just don’t find it funny anymore.

Let’s pause here for a second. I titled this piece “Why I Don’t Do Joke Misandry” and not “STOP DOING JOKE MISANDRY” for a reason. It’s entirely possible that joke misandry is doing worlds of good for the people who engage in it. I’m merely explaining my decision not to, for reasons that are, above all, personal.

I don’t hate men because I love the masculine within myself. I usually opt not to label my personality traits as either masculine or feminine (why should strength be one and sensitivity the other?) but yes, there are some essentialized aspects of maleness to which I strongly relate.

I don’t hate men because I love my six-year-old nephew, a future man, whom I see desperately searching for ways to be good and helpful and kind. I don’t know how to help him do that and then joke on Twitter about how he should be sent to Mars upon reaching puberty.

I don’t hate men—and here I will speak to my entire queer community—because of the trans men I call friends, many of whom I consider to be paragons of what a better version of masculinity might look like.

I don’t hate men, but I’m not really talking about men here anyway.

I acknowledge that in some ways, my beneficence towards men stems from my unusual privilege, since I do not have to interact with men very often. I don’t date, kiss, or share a living space with men, I rarely work for male editors, and in my own work as an editor I have yet to employ a male writer. (Not that I wouldn’t, I just haven’t.) The men I keep around are special examples, whom I have carefully chosen. They’re capable of allowing me to build the campfire without them feeling less masculine, while they obligingly reach the things on the tall shelf for me, without my feeling like I’m about to be stripped of my feminist credentials. Such a harmony is possible if one is very picky and very lucky.

On the other hand, I will acknowledge that some of my interactions with men have left me so frustrated that I felt the incredible pull of the great misandrist shout. When white men in Alabama voted for Roy Moore, for instance. When I’ve read the work of a male author or journalist whose insights into human nature have me spellbound, until I realize those insights only extend to other men, and they regard the other half of the species as nothing more than a vagina and a question mark. Our current #metoo moment has been particularly trying, of course, forcing one to consider not just the horrible men who have harassed and assaulted women, but the infinitely vaster, silent legions of good-or-at-least-acceptable men who knew and said nothing, or who blithely built their careers on the foundations of women who had been exhausted and scared and demeaned into the dust. I don’t hate men, but boy do I ever hate the way maleness works.

As such, I really have no moral objection with joke misandry, or indeed the hatred of any oppressed group for a more powerful one (though it’s important to say that I am not extending this argument to any other such configuration). We’re all entitled to feel however we feel about men, from a moral perspective. The issue I take with joke misandry is tactical in nature.

“Fuck all men” or even “kill all men” is a delicious thing to say over drinks or in a private email chain with your friends. It’s punk. It’s satisfying. It’s a solidarity-builder. But on social media, the line between public and private discourse is particularly fuzzy, and the message of joke misandry is getting picked up by men who don’t know it’s a joke, by alt-righters desperate for the day’s clickbait headline, and by the halfway decent men who we might have had a chance at turning into allies if they hadn’t stumbled into our slumber party at the exact moment we were all jokingly toasting to their imminent demise.

Back in the glory days of ironic manhating, the whole joke was the idea that misandry, whether ironic or deeply felt, could hurt men, especially since men have traditionally hurt women with tools that go far beyond mere rhetoric. But the thing is, yes: men reading that they are trash who should never speak again hurts them right in the feelings. (Men are fragile Precious Moments figurines, I am telling you!)

Of course, the natural rebuttal to that is “fuck their feelings!” And this is nothing if not fair. Men (especially white, cis, American men) have enjoyed centuries of riding the world like a rented pony at a birthday party, and they can survive a bit of taunting. It’s just that taunting makes people demoralized and defensive, and demoralized and defensive people don’t listen. That’s my big insight into this entire issue. Almost anyone who is held personally accountable for the crimes of the system they were born into will immediately put up their strongest emotional walls to defend themselves from such a painful idea. A small percentage of people have the mental and emotional resources to fight down those feelings of defensiveness, and acknowledge that they are not being personally targeted by the “male tears” mug, but for most people, that’s where you lose them.

Men are people too. Like all people, they want to feel they are the heroes of their own stories. If not presented with a narrative where that is possible, they will settle for being the victims. Some of the most frightening men on the internet (and by extension, the planet) think of themselves as the victims of feminist tyranny, and I don’t do joke misandry because I want to deny them that ridiculous premise.

“Well, if they don’t like it, they can fuck off.” Okay, but fuck off where? We’re all kind of stuck on this planet together, and men are pretty much going to continue to make up half the population, going forward. We’re going to need their help to save the planet, and combat horrific wealth disparity, and to ensure that going forward, the strides we make as a civilization are extended to women and to racial, religious, and sexual minorities. Those are projects big enough for us all to be heroes.

We shouldn’t have to do this. If we were all politically perfect animals, the men of earth could graciously accept their well-earned roast. It is absolutely unfair to expect women to be mindful of male feelings while navigating this haunted house reality where nearly all the monsters are men themselves. But that’s the thing about being morally righteous: it requires the tedious, unglamorous, unfair work of playing by the rules even as you watch your enemies gleefully break them.

I certainly don’t blame anyone for letting off some steam with the occasional “fuck all men.” It offers some instant gratification in a world that generally moves horribly slowly. It’s a bitter toast to the better world none of us will live to see. But I still don’t do it, because once the feeling of exultation has faded, it’s just made the work of getting to that better world even harder. Worse, it makes me feel a little meaner and cagier and poisoned. I don’t do joke misandry, not for men, but for me.

Again, if it makes it easier for you to get through your day and deal with the men you don’t have a choice about, by all means: raise your mugs of male tears to the sky. I’ll just be sneaking mine out of a flask in the ladies’ room.