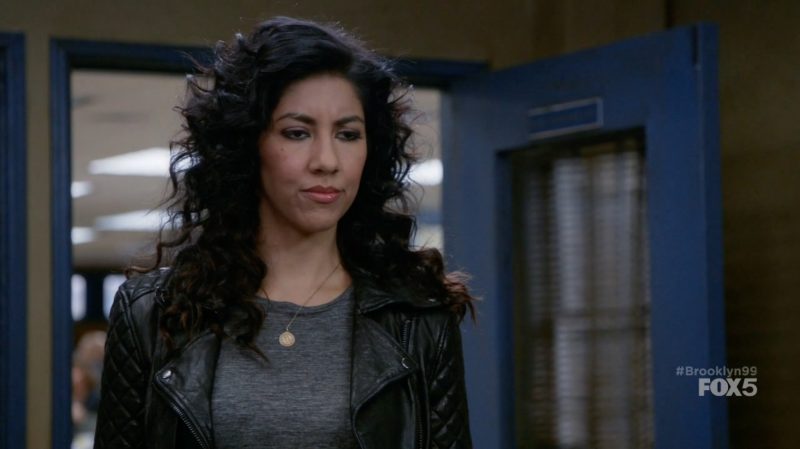 On last night’s Brooklyn Nine-Nine, Detective Rosa Diaz (Stephanie Beatriz) revealed something that her most ardent fans have long known: she is bisexual.

She shares this fact about herself after her friend and squadmate Detective Boyle catches her on the phone, wishing aloud that she was in the arms of the person on the other end of the line, but as Boyle overhears, that person is a woman. And ever since that moment, queer women the world over have been feeling like this:

Stephanie Beatriz, who herself identifies as queer, did an interview with Entertainment Weekly discussing this major character development, and the whole interview is so perfect it’s like it was written by a committee of woke queer angels, but there are two parts that really stand out to me (a person who has read and conducted a lot of these interviews over the years).

“Not to say that my story is the same as Rosa’s at all. It’s not. But there were things that we wanted and thought would be really important — like the word itself: bisexual. To me, that’s an important word in my coming out. I know that not all people are totally celebratory of that word because it’s from a time where it was like these two genders — that’s all there is. And now there’s a lot more flexibility and fluidity in sexuality, which is why sometimes I gravitate toward the word queer as well. For me, bisexuality includes people that are trans, it can include people who identify in different kind of ways. But for Rosa, there was a point for her where she heard that word somewhere along the line and she saw herself in that word, so for her, it was important for her to identify in that way. I suggested that that word was really important to Rosa and that it also would be really important to the bi community to have that word said aloud on TV.”

This basically hits every single note that one prays for when discussing these issues on TV and in real life, in acknowledging the multiplicity of identities that make up the queer rainbow, the ways in which the language used to describe those identities is deeply personal and also constantly evolving. Even as television has given us more and more depictions of women who love women in the past few years, bisexual representation has lagged lamentably behind. Bisexual women are often portrayed as duplicitous, as cheaters, or given the Alice Pieszecki treatment, in which a show finds it easier to treat them as de facto lesbians than embrace the full spectrum of their attractions. And if fully-developed bisexual women are a rarity on television, then fully-developed bisexual women of color are like unicorns feasting on a bed of four-leafed clovers.

Rosa Diaz is nobody’s stereotype. She is as honest as a cup of black coffee. She is as tough as her ever-present leather jacket and as soft as the person underneath it. She has had meaningful relationships with men, notably her fire-and-gasoline affair with Adrian Pimento. (She also restores classic cars and sells them to celebrities in her spare time, which is why she is friends with Tom Hardy, but she’s not going to, like, brag about it.)

The other part of Stephanie Beatriz’s interview I want to call your attention to is this:

“For the audience, some people may be surprised, other people are going to rejoice and say, “Finally!” For me, as an actress, I’ve always felt something there. But for the writers, that’s something they’ve discovered organically over the last four seasons.”

How warming, how comforting to hear it confirmed that even before the writers figured it out for themselves, an actress and her audience knew something together, in their bones.

If Rosa Diaz’s bisexuality comes as no surprise, it’s not because she’s a tough woman with a soft butch fashion sense who can clearly change a tire in three minutes flat; it’s because the jigsaw puzzle of her personality has always had a missing piece in the middle that queer women could sense the shape of, even before it was spoken out loud. You can see Rosa with a woman, who grins wryly at her when she is all puffed-up feathers, who slips a hand under that leather jacket, who doesn’t treat Rosa as a challenge to be conquered but a person to be loved. It fits. And it would still have been true even if Brooklyn Nine-Nine were cancelled last season and we never got to hear it said out loud. But I’m very glad we did.

Rosa will apparently be exploring her bisexuality in more depth next week, and hopefully the show will give her a love interest in the near future, which we can begin dream casting now. (ALI LIEBERT. THERE. DONE.)

Tis the season to support queer media! SUBSCRIBE TO THE DART so we can all keep doing this.