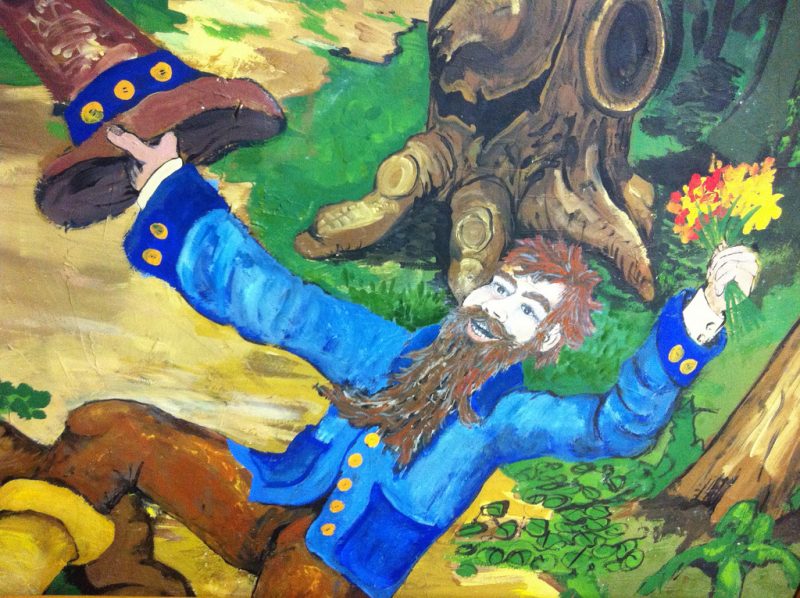 The first time I read The Lord of the Rings, I was about fourteen. The movie had just come out, and after watching it seven times in a row, I realized I should probably tackle the book at some point. To my horror, I discovered the book took what felt like absolute ages to get to the bits I thought of as “the good bits.” I was in love with Strider, full of the passion only a teenage crush can inspire, and all I wanted in the world was to get to the part where the Hobbits meet him.

Tom Bombadil is a horrible thing to encounter under those circumstances.

I hated him, from his stupid feathered hat to his yellow boots. He was embarrassing, and creepy, and it felt like the chapters with him would never end. His poetry drove me to the point of wanting to commit murder, and I was absolutely certain that his beautiful young wife was not with him through her own choice.
Now I’m nearly 31. I’m older, and wiser, and while I’ll always have a soft spot in my heart for Viggo
Mortenson, the burning passion I once felt has faded a bit. The time seemed right for me to read
The Lord of the Rings again. This time, I thought, maybe Tom Bombadil won’t be so bad.
I was wrong.
It was worse.

Tom Bombadil is not a cheerful and benevolent forest god. He’s a creepy creep, and he drugs
people, and forces them to call him master.

Tom Bombadil is evil. Hear me out. First of all, while Tom’s wife, Goldberry, spends most of her time wandering around the house with a vapid smile plastered on her face, she is clearly both trapped and terrified, especially at the thought of Tom gaining even more power. Observe:

‘Fair lady!’ said Frodo again after a while. ‘Tell me, if my asking does not seem foolish, who is Tom Bombadil?’

‘He is,’ said Goldberry, staying her swift movements and smiling.

Frodo looked at her questioningly. ‘He is, as you have seen him,’ she said in answer to his look. ‘He is the Master of wood, water, and hill.’

‘Then all this strange land belongs to him?’

‘No indeed!’ she answered, and her smile faded. ‘That would indeed be a burden,’ she added in a low voice, as if to herself.

Couple this with the fact that Goldberry is supermodel material while Tom is described to have the face of a wrinkled red apple, along with the fact that Tom’s backstory reveals he ‘captured’ her, and you will see that this ‘romance’ of Tom’s has turned into a horror story.

Second, there is evidence that Tom drugs the Hobbits:

“The drink in their drinking-bowls seemed to be clear cold water, yet it went to their hearts like wine and set free their voices. The guests became suddenly aware that they were singing merrily, as if it was easier and more natural than talking.”

Right, so the most this ‘water’ does is loosen the Hobbits’ tongues a bit and maybe make them sing a little. Harmless, right?

Until you notice the Hobbits have started to call Tom “Master,”

Tom sat on a while beside them in silence, while each of them tried to muster the courage to ask one of the many questions he had meant to ask at supper. Sleep gathered on their eyelids. At last Frodo spoke: ‘Did you hear me calling, Master, or was it just chance that brought you at that moment?’

And you see the evidence that the Hobbits are losing track of time,

“Whether the morning and evening of one day or of many days had passed Frodo could not tell. He did not feel either hungry or tired, only filled with wonder. The stars shone through the window and the silence of the heavens seemed to be round him. He spoke at last out of his wonder and a sudden fear of that silence:

And, most significantly, the Hobbits’ will seems to have all but disappeared. In fact, Frodo will say or do practically anything Tom wants him to.

“Indeed so much did Tom know, and so cunning was his questioning, that Frodo found himself telling him more about Bilbo and his own hopes and fears than he had told before even to Gandalf. Tom wagged his head up and down, and there was a glint in his eyes when he heard of the Riders.”

‘Show me the precious Ring!’ he said suddenly in the midst of the story: and Frodo, to his own astonishment, drew out the chain from his pocket, and unfastening the Ring handed it at once to Tom.”

“‘Have peace now,’ she said, ‘until the morning! Heed no nightly noises! For nothing passes door and window here save moonlight and starlight and the wind off the hill-top. Good night!’”

“Sleep till the morning-light, rest on the pillow! Heed no nightly noise! Fear no grey willow!’”

Now, I don’t know about you, but if I was staying at someone’s house, and they kept telling me to “ignore the noises you hear tonight,” I’d be a little concerned.

That night, Frodo, Merry and Pippen all have nightmares, and sure enough, they seem directly linked to these “nightly noises.”

“At his side Pippin lay dreaming pleasantly; but a change came over his dreams and he turned and groaned. Suddenly he woke, or thought he had waked, and yet still heard in the darkness the sound that had disturbed his dream: tip-tap, squeak: the noise was like branches fretting in the wind, twig-fingers scraping wall and window: creak, creak, creak. He wondered if there were willow-trees close to the house; and then suddenly he had a dreadful feeling that he was not in an ordinary house at all, but inside the willow and listening to that horrible dry creaking voice laughing at him again. He sat up, and felt the soft pillows yield to his hands, and he lay down again relieved. He seemed to hear the echo of words in his ears: ‘Fear nothing! Have peace until the morning! Heed no nightly noises!’ Then he went to sleep again.”

Notice how Pippen repeats the mantra to himself? Almost like he’s been brainwashed?

What happened that night? Did the Hobbits really just have bad dreams, or did they witness something unspeakable, something so dark, that Tom had to carefully drug and brainwash them into forgetting, leaving only a feeling that they’d had bad dreams behind?

We may never know.

What we do know is that telling the Hobbits to ignore the “nightly noises” isn’t the only phrase we see repeated time and time again. That’s right, I’m talking about the dreaded,

Comes hopping home again. Can you hear him singing?

I mean, it’s no wonder. It couldn’t be more cringe-worthy and embarrassing if he tried. He even talks about himself in the third person.

But what if the poetry was never meant to be good? What if it’s only meant to break through the mind’s defenses and turn any brain into jelly, leaving any listener so utterly defenseless that Tom can then invade their minds and control them?

It never made sense that Goldberry is supposedly in love with him, or even that the Hobbits remotely like him. I refer to one final scene:

“He then told them many remarkable stories, sometimes half as if speaking to himself, sometimes looking at them suddenly with a bright blue eye under his deep brows. Often his voice would turn to song, and he would get out of his chair and dance about.”

Picture it. Your host, who talks about himself in the third person, and who keeps saying “Hey merry dol, derry dol” like it’s not the most instantly annoying phrase anyone has ever heard, not only makes you listen while he drones on and on, but he actually gets up and dances about every now and then. What are the chances of anyone willingly spending time with this person?

The real mystery in Lord of the Rings is not, “why didn’t the eagles just fly them to Mount Doom?,” it’s “How did the Hobbits escape Tom Bombadil’s house?”

Laura Shortridge is a bleeding heart liberal and secular feminist who spends far too much time thinking seriously about trivial things. Find her on Twitter @DiscordianKitty.