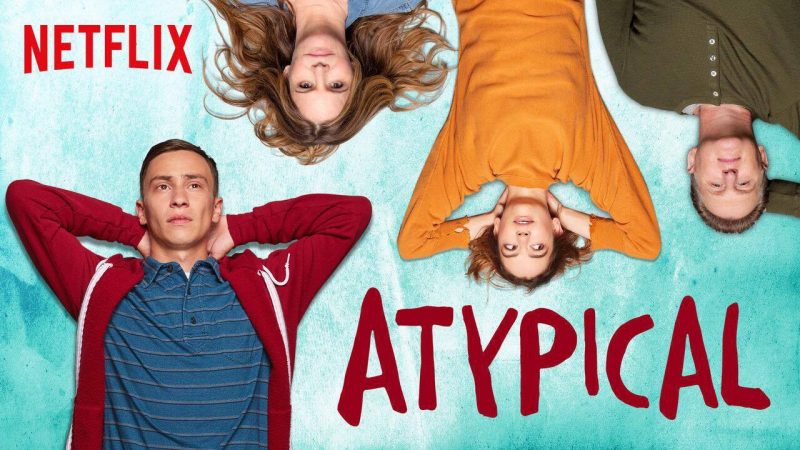 TV audiences in 2017 are the proverbial kid in a candy store. Peak TV has brought more high-quality programming than we could ever consume in a lifetime, new expectations for what dramas and comedies can do, and an overdue chance for more shows written by or about women, people of colour, and LGBQT people. But as an autistic woman, there’s still a gap in my TV schedule, with society’s fear and misunderstanding of autism leading to a dearth of shows where I can see characters like me.

I was hopeful, then, about Netflix’s new comedy-drama series, Atypical, which follows Sam (Keir Gilchrist), an autistic 18-year-old high schooler, as he decides to try dating for the first time. Although characters with autistic traits have popped up on television before, they’re usually just ambiguously ‘weird’ and socially awkward (bonus points if they’re a brilliant detective dedicated to solving gruesome murders). 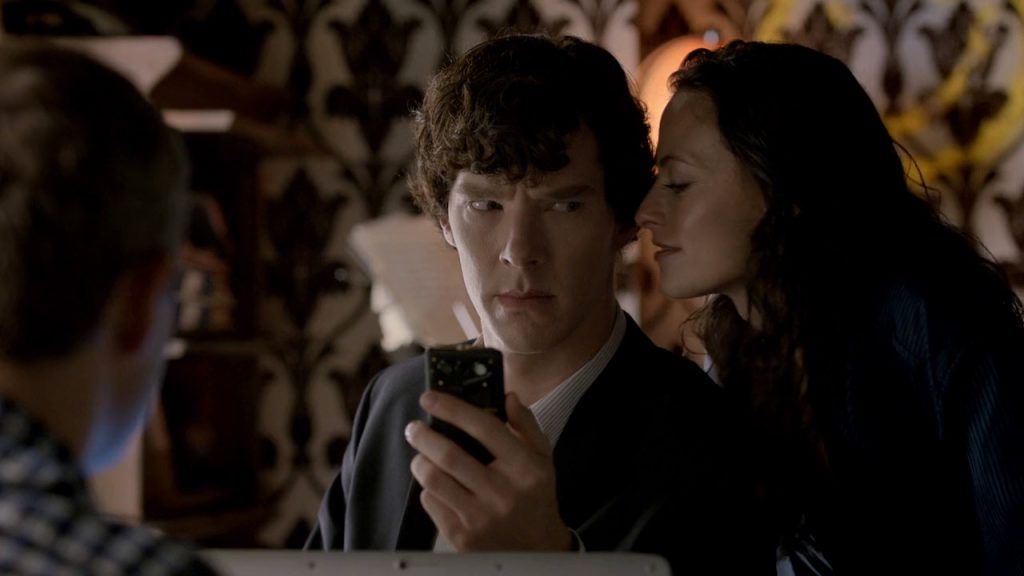 With a main character who’s specifically named as autistic, Atypical had the potential to be a chance for autistic people to take part in the TV revolution, with a funny, realistic look at the highs and lows of our lives.

Unfortunately, and despite the extremely talented and likeable cast, Atypical is resoundingly bland, both creatively and as a representation of autism. The best TV comedies and dramas make audiences feel like they just happen to be watching a slice of a living, authentic world which goes on beyond the screen. In contrast, it’s impossible to forget that Atypical is a TV show. It has multiple scenes of characters saying things clearly intended to deliver indie-movie style humour, poignancy, or just exposition, rather than resembling things humans actually say. A lot of the supposed humour, such as Sam’s friend Zahid’s misguided sex advice, falls flat, and some of the big emotional moments – for instance, Sam’s mother Elsa asking if his therapist can give him “strategies for when you get your heart broken,” are cringe-inducing. The only thing the writing is good at is the exposition.

The show’s presentation of autism is as staged as everything else. In interviews, writer Robia Rashid was keen to stress the amount of research they did (http://www.vulture.com/2017/08/atypical-showrunner-robia-rashid-interview.html), including hiring ‘autism consultant’ Michelle Dean. (As far as I can tell, Michelle Dean is an academic specialising in autism, not an autistic person). At the very least, the commitment to textbook accuracy shows. Sam displays a checklist of autistic traits, some so familiar as to be stereotypical–he has difficulty understanding social cues, is blunt and highly logic-driven, and talks at length about his special interests of wildlife and Antarctica–and some less obvious, such as his sensory aversions to loud noises and certain textures. The show tries to represent his experiences creatively – for example, in a scene where Sam’s classmates pick on him, their mockery dissolves into a blur of noise as he becomes unable to process the situation. But I don’t think clever effects like this make a neurotypical viewer empathise with Sam. They make autism seem like something to be stylised and studied, as if at the bottom of a microscope. 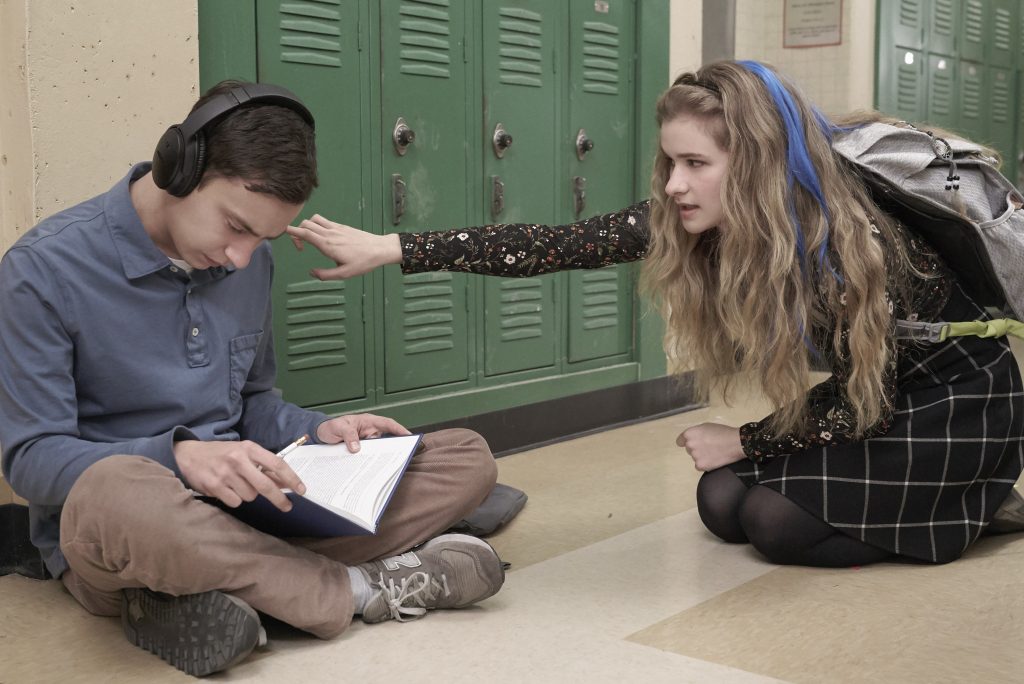 Moreover, Atypical’s depiction of autism is universally negative. Sam’s autism is the source of problems in his own life, as it thwarts his efforts to find a girlfriend, and for his family; his mother is driven into an affair partly because of the stress of coping with Sam growing up, his father struggles to relate to him, and his sister nearly has to give up a prestigious scholarship to be able to look after him in school. Of course, being autistic does make life harder in some ways–not helped by a world that refuses to extend understanding or compassion to autistic people–and family members of autistic people, however loving, can struggle as well. But in my experience and that of many others, being autistic is not a tragedy. Atypical could have shown Sam taking pleasure in his interest in wildlife and enjoying being outside the cycle of high school drama, even as he struggles with loneliness. It could have shown his family liking him as a unique person, not just a responsibility they have to care for. This isn’t a naive vision of autism; there are genuinely positive aspects of life on the spectrum that the media never shows.

One small scene sums up all the problems with Atypical’s view of autism. In the show’s fourth episode, ‘A Nice Neutral Smell,’ Sam’s father Doug attends a support group for parents in a bid to better relate to his son. He is reproached by the group organiser for using identity first language (‘autistic’) instead of person first (‘person with autism’). It’s clear that the show is in agreement with Doug that identity first language is better, and it felt like the writers deliberately included this scene to show they know that many autistic people prefer it. But the final word on the subject is from Doug: “It doesn’t make a difference. He’s still autistic.” The writers know that identity first language matters, but they don’t know why, or they wouldn’t have had a neurotypical character explain it with a shrug of despair. Identity first language matters because it’s a way for many autistic people to say that being neurodivergent is part of our identity, not an unfortunate illness. (For an explanation of the issue from an actual creative autistic person, see this cartoon by Beth Wilson (http://doodlebeth.com/identity-first-language/).)

Other aspects of Atypical seemed frustrating and implausible. Why does Sam have no autistic friends, when the Internet has made it easier than ever for autistic people to build communities? Why does he never try explaining to the girls he tries to date that he’s autistic and asking for patience when his behaviour seemed odd? It’s understandable that Sam is embarrassed about his condition and wants to hide it – that’s what growing up as an outsider does. But it’s frustrating that his attitude to his autism doesn’t grow at all, and that the show ignores obvious solutions that many autistic people use every day.

There’s a disability activism adage that explains where Atypical went wrong: “Nothing about us without us.” As far as I know, none of the show’s writers or directors are autistic – Rashid certainly isn’t, as she’s described the show as inspired by autistic family members, framing it through a view of the ‘other.’ Nor are any of the actors apart from Anthony Jacques, who has a small role as another autistic teenager who Sam is pushed into spending time with by their mothers; conspicuously, the show can’t imagine a friendship between two autistic people. Stories about marginalised groups are generally best told by people from that group, and autistic stories are no exception.

However, when looking for shows both by and about autistic characters, I came up blank. I’m a woman and I’m queer, and for those aspects of my identity, there’s a range of writing where I can see myself reflected in strong, diverse, interesting characters. But there is no autistic canon. I would welcome recommendations to the contrary, but I can’t think of a well-known novel, film or TV programme where both the writer and the main character are unambiguously autistic.

This is not because autistic people are incapable of or uninterested in fiction and the arts. When I was a child, stories were constantly exploding in my head like fireworks. I could spend whole lunch breaks where I was happiest in a quiet corner of the playground, twitching my hands (repetitive movements, used by many autistic people to self-soothe, are called stimming), lost in a world of my own creation. And there are autistic people working in television – Community creator Dan Harmon, for instance, was diagnosed with a form of autism after he began writing the show (https://www.wired.com/2011/09/mf_harmon/), and you can see the influence in the character of Abed, whose autistic traits are joked about but never explicitly confirmed.

But there must be more autistic people in the industry who feel obliged to hide their disability to stay employed, and others who are kept out altogether. The film and television industry, after all, is heavily dependent on long and unpredictable hours, noisy and overwhelming environments, and a networking culture where polished social skills are vital for getting ahead – all of which make it incredibly challenging for autistic people.

If the television industry was actively invested in becoming more diverse, including making accommodations on set to make it easier for autistic people to work in the industry, autistic creators could write and direct a similar show to Atypical. But it would probably have a different title, because it wouldn’t treat autism as an anomaly, but as something woven into its vision of the world.

With more autistic writers involved in television, we would get some truly fresh and compelling programming, as autistic people’s way of seeing gets translated visually. In a recent interview with Time, non-verbal autistic writer Naoki Higashida was asked for his favourite number. After consideration, he replied that it was 3: “3 is enchanting. It was created even though it wasn’t needed”. (http://time.com/4856602/autism-nonverbal-book-naoki-higashida/) Given the chance, autistic writers on TV could turn the numbers that count our lives into the stuff of magic.

Rosemary Collins is a journalist and writer based in Bristol, England. She’s written about autism, culture and feminism for The New Statesman, The Establishment, The Toast and Culturised, among other websites, and is currently seeking representation for her novel, How to Change the World. Follow her on Twitter @RosemaryC_24.