First of all, it feels important to say that I don’t normally do the thing I’m about to describe. There are people who do; people whose whole social media raison d’etre is going head-to-head every day with Trump supporters. I’m not one of them. That’s not to say I don’t argue about politics on Twitter, but I argue with people I think I have some chance of convincing, or who have some chance of convincing me. Fighting Trump supporters is World War I-style trench warfare: there are heavy casualties but no meaningful advances, so why would I put myself through it?

But on this particular Sunday I went to the rhetorical front lines, and I will tell you now what I learned about myself, my allies, and my enemies, in the brief and crucial time before it all feels normal.

It started with a tweet by Donald Trump Jr., which was itself a response to Fox News. 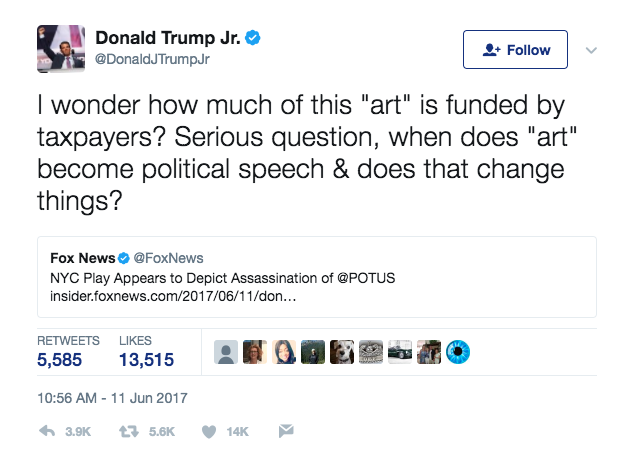 What Fox doesn’t mention (in the tweet or the original article) is that the play in question is Julius Caesar, and turning the sitting president into Caesar is a theatrical conceit about as original as making Hamlet a brooding art student. But I wouldn’t jump in to say that because I am not in the business of providing unsolicited theater classes to strangers. What I responded to was the first response to that tweet, which was the following picture. 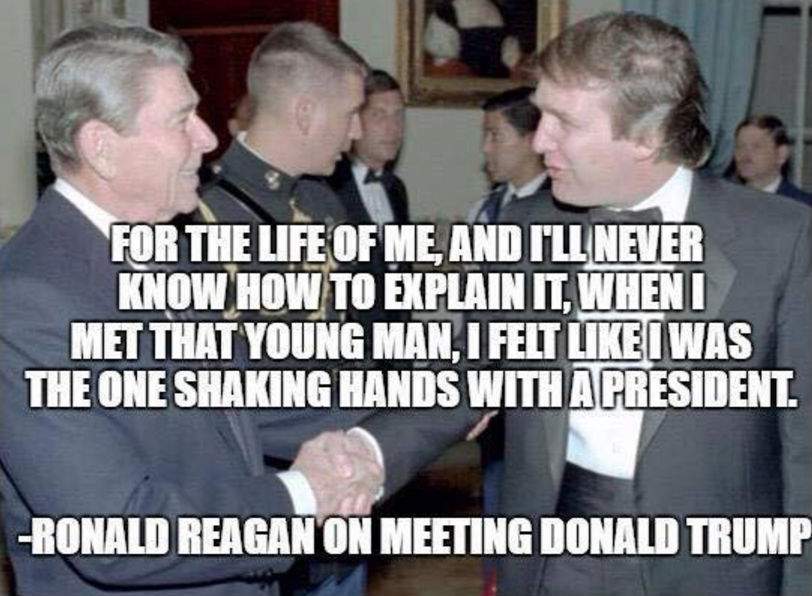 This is what really got me, because, unlike discussions of art (or “art” if you’re Donald Trump Jr. and you need to “no homo” it) this quote rests on provable facts. By which I mean, it is provably false. Ronald Reagan never said any such thing about the young Donald Trump. You can find articles claiming that the Gipper felt many ways about Donald, ranging from barely-disguised contempt to casual affability, but you will never find any evidence that he experienced a Nostradamus-like moment of insight into Trump’s future when their hands touched. And god help me, I took it upon myself to point that out.

I knew what I was signing up for when I said it—I could feel the cold, damp walls of the trench closing in around me—but I had to. Because for this one moment, the debate left the realm of conspiracy theories and MAGA hashtags, and entered the realm of fact.

I don’t expect to change anyone’s heart or mind about Donald Trump, especially not strangers on the internet. Challenging anyone’s “beliefs” is a futile task. What I find intolerable is the use of a naked falsehood to prop up those beliefs. So my modest hope was that the Trump supporters would accept that they could no longer use this one, small piece of ammunition, and remove it from their arsenal.

That was not what came to pass.

The first person to respond to me captured one of the basic strains of reaction.

Peggy (who has since blocked me, bless her heart, as if I was the author of the endless string of diatribes that followed) acknowledges that yes, the quote may be fake, but the feeling it gives her is real. (Goodbye, fact! Like an angel, you touched a single foot to the earth, and where you alit, a fountain of bullshit sprang!)

As you can imagine, Peggy’s remark was met with withering sarcasm from the left, and vociferous support from the right. The support had three distinct flavors: 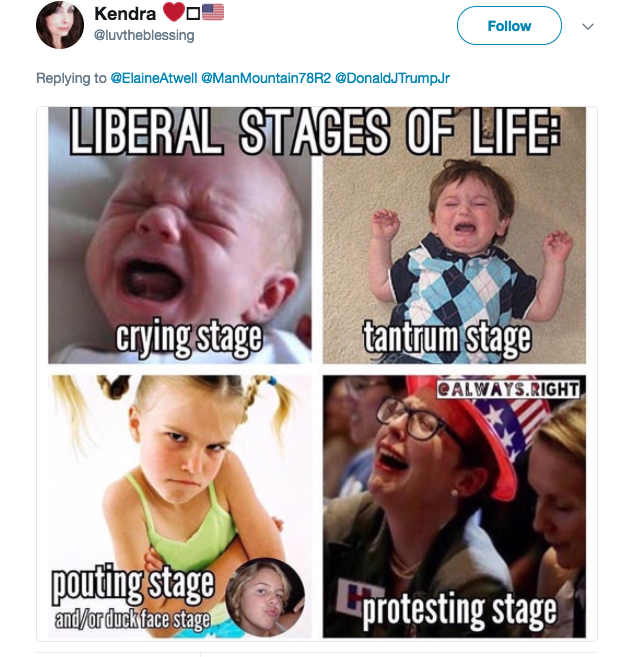 3. One that I can’t find now, but which went right ahead and suggested that I have sex with my dog. (But did not call me fat, which I count as a victory.)

None of these rebuttals, you might notice, do anything to refute, or indeed address, my original point, so I tried desperately to return to the realm of fact, like a kayaker trying to paddle back up a waterfall. 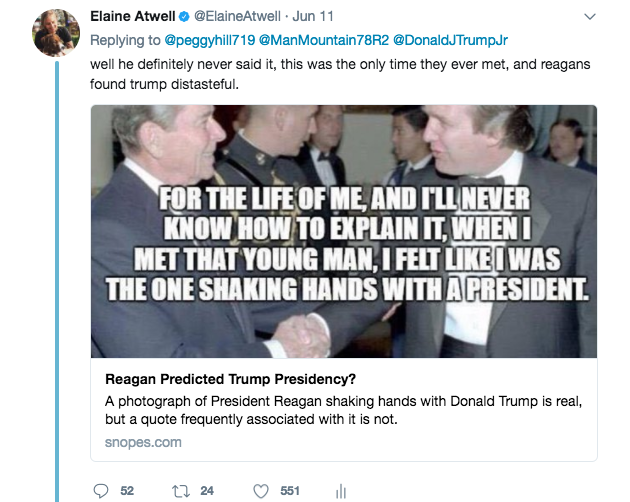 At this point I’d like to pause and offer a critique of my own behavior. Because I engaged in two tactics here which were not entirely upright. To begin with, I inserted speculation about how the Reagans “felt” about Trump, which I could not prove and only even vaguely remembered from reading about in an article I skimmed at some point during the bloodshot media binge I have been on ever since the presidential primaries. The second thing I did wrong was saying that Reagan “definitely never said it,” when for all I know Ronnie whispered it into his pillow every night, as certain people were quick to remind me, in their own way.

But still, in linking to the Snopes article, I hoped to finally establish that the handshake revelation is not among Ronald Reagan’s verifiable quotes.

My anonymous adversaries (who may all be Russian operatives; I can’t prove they’re not) fired back with cries of “fake news,” a phrase that has unseated “YOLO” as my least favorite expression.

Now obviously, the tendency of a group of people to decry any fact they dislike as “fake news” is horrifying. If Americans cannot form a consensus as to what constitutes reality, it’s difficult to imagine our being able to live peacefully side-by-side. But this realization infected me with a giddy nihilism, and my participation in this debate took a darker turn. If nothing mattered, then I would out-nothing every flag-draped fact-denier on the whole goddamn internet. I figured out how to edit images on my phone, right then and there. 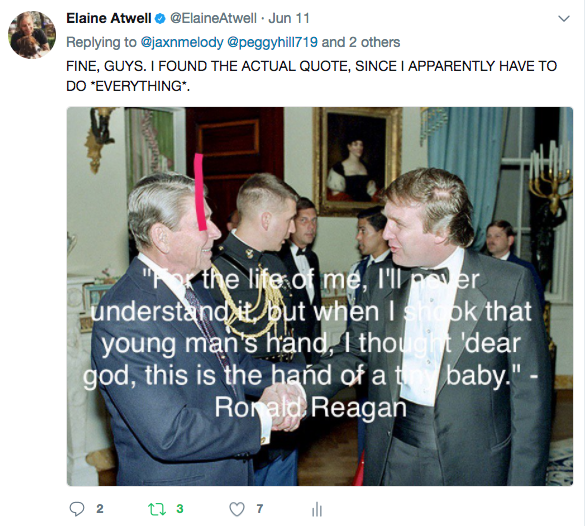 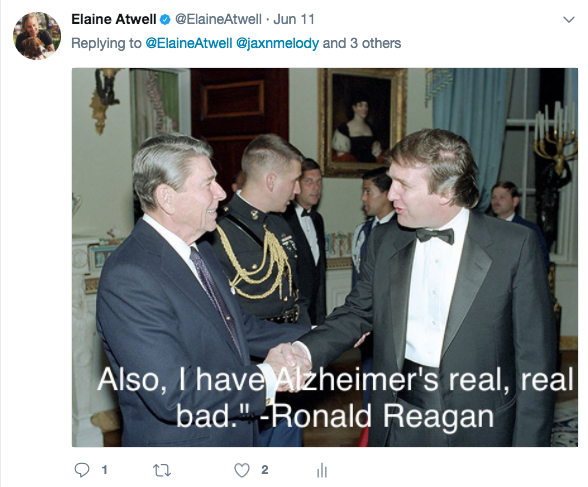 Note the pink smear on one of the images, which I sloppily left in because my girlfriend was starting to express a desire that I put down my phone for five minutes and just BE IN A HARDWARE STORE WITH HER.

I’d like to say it was my girlfriend’s censure that made me finally bow out, but that would be a lie. I was high on adrenaline; I felt like Uma Thurman’s character in Kill Bill, slicing through legions of Crazy 88s. They didn’t know they’d been slaughtered, of course; they kept bleating on. But I knew. I had my fact. It wasn’t until I looked around at the people agreeing with me that I began to feel faintly disgusted.

SEE THE LITTLE AVATAR OF THE GUY AT THE BOTTOM? THEY ACTUALLY DISAGREE!!

The second guy, Terry, is the best example of a group of left-wing tweeters who I found myself increasingly unable to distinguish from the ones on the right. He slung the same insults about “snowflakes” and “elitists.” A couple of people actually tweeted to say that they’d blocked him, apparently never figuring out that they were on the same side. I didn’t realize it until I made the same mistake myself. 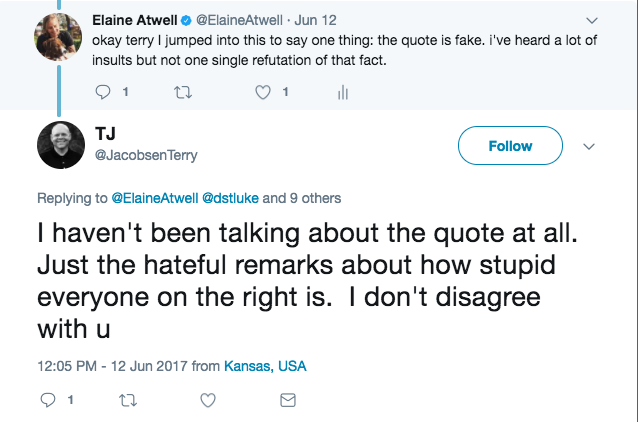 That’s when I bowed out.

The moral of this story is not “the right and the left are equally bad and their discourse is equally toxic.” Donald Trump is an abscess of racism, misogyny, and xenophobia, who will probably cost us our last chance at saving the planet, and his supporters support that. I spoke up on Twitter to remove the thin veneer of respectability offered by Ronald Reagan (who, for the record, was also pretty much a nightmare) and his imaginary endorsement. I had a different moral in mind when I started writing this, before a left-wing man shot up Congressional baseball practice, and someone else burned the memorial of a murdered Muslim girl. I don’t have a moral anymore. I just have a cry for help, for adult supervision, for someone to please come along and take what is happening to us on social media seriously.

Twitter is and is not real life. People are infinitely more dogmatic, aggressive, and cruel when debating on a screen and under the veil of anonymity (or, like me, without it). But we carry the ideas we learn there out into the real world, for better and for worse. It is the site where alienated men are radicalized, where realities diverge.

At the moment during my Twitter war when I felt the most enraged, posting pictures in the hardware store, I looked up for a moment and thought to myself that any one of these fellow customers or smiling sales associates could be the very same people I was sarcasming to death on the internet. We could make eye contact, make way for each other’s carts, and have a moment of perfectly pleasant human connection, never knowing how violently we disagreed. I tried to find that idea comforting, but it left me deeply disturbed, because in the end we would still go home and retreat back behind our screens, toasting glasses of each other’s tears.