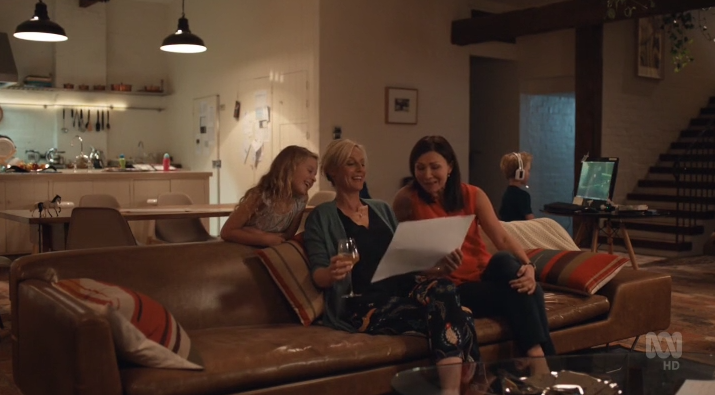 I am very happy to report that after a lackluster season premiere, Janet King is back. That comes as a huge relief, because it has been A TOUGH WEEK, PEOPLE. Sense8 got cancelled, Wentworth was off its game, and the world generally seemed to be hurtling blithely toward apocalypse. We needed a hero, and SOME OF US didn’t even get to see Wonder Woman until Sunday because SOME OF OUR girlfriends are “busy.” 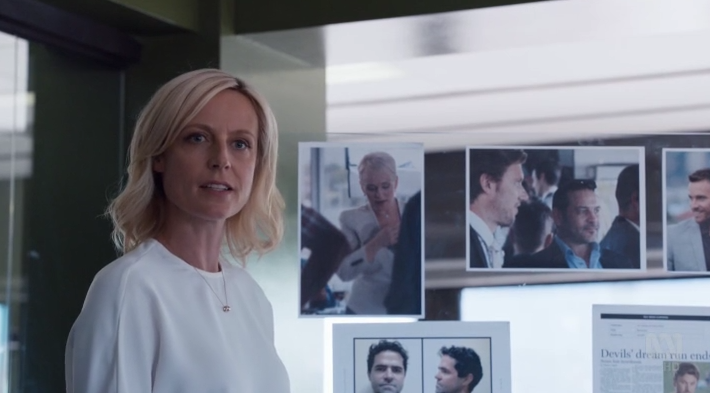 DID SOMEONE SAY THEY NEEDED A HEROINE FROM A DISTANT ISLAND, WHOSE CAUSE IS JUSTICE AND WHOSE BEAUTY IS MATCHED ONLY BY HER WRATH? 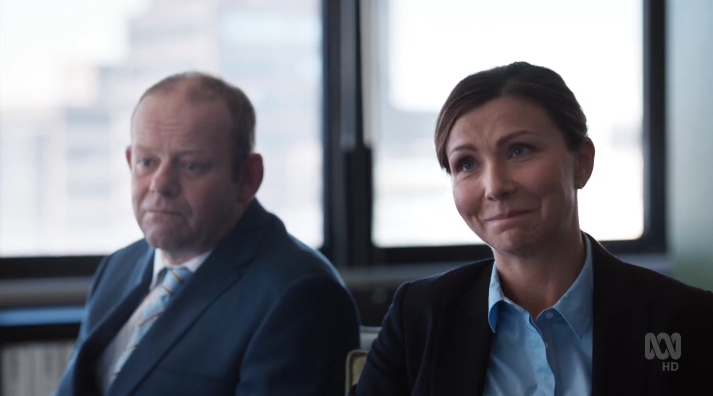 I WOULD ALSO LOVE TO SEE WHAT YOU’D DO WITH A LASSO. JUST PUTTING THAT OUT THERE.

Yes, much like Diana of Themyscira, Janet King is back to bestow her gifts upon a world that does not deserve her, and also like Diana, she is having to make some painful discoveries about her own family in the process.

So we pick up right where we left off last week, in the immediate aftermath of Clay Nelson throwing himself in front of a bus to avoid having to testify about his role in cricket match-fixing. Janet is understandably shaken by Clay’s sudden death, but not so much so that it puts her off her game, and she immediately begins to wonder why Clay opted to commit suicide-by-bus. At that point, Richard helpfully appears to tell her that a mysterious stranger knocked on Clay’s door last night, and may have pushed him over the edge. 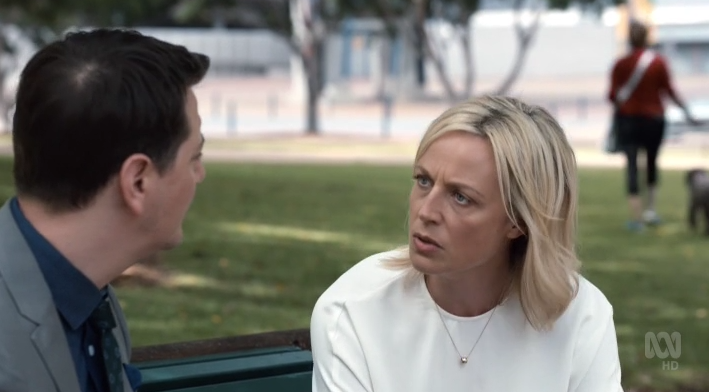 WHAT COULD SOMEONE HAVE TOLD CLAY THAT MADE HIM WANT TO DIE? 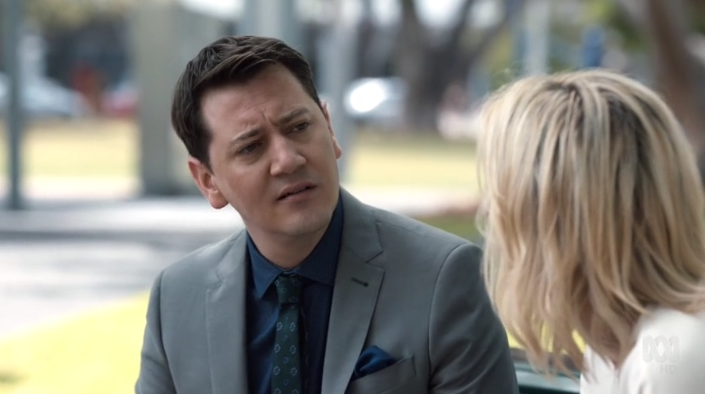 MAYBE THEY TOLD HIM ABOUT MANCHESTER? THE PARIS ACCORD? JUSTICE LEAGUE HAS ALREADY BEEN SHOT AND IT’S TOO LATE TO CALL IT “WONDER WOMAN 2?”

Janet and the team take a close look at Clay’s financials, and begin to suspect that he was gambling on behalf of other, shadier underworld figures. Specifically, “Mister Concrete,” the Mafioso who shoved that wad of cash into Richard’s pocket last week. Signor Concrete is also suspected of using football star Nate Baldwin to launder money. The woman connecting all these well-heeled men is Maxine, the blonde agent who so forcefully reminds one of a non-magical Rita Skeeter. 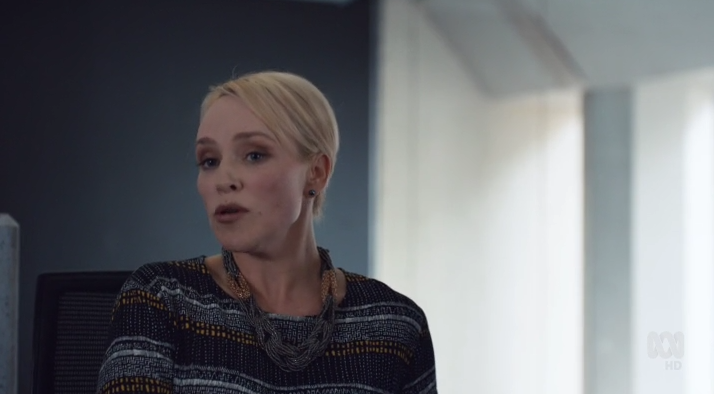 BUT WHEN YOU THINK ABOUT IT, ISN’T DRACO THE REAL HERO OF THE BOOKS?

Maxine pleads ignorance in all matters relating to illegal gambling, but points Janet in the direction of one of Nate’s major sponsors: Pax Car Rentals. (Making it a car rental company is actually a great little nod to the most well-known partnership between an athlete and such a company in history.) 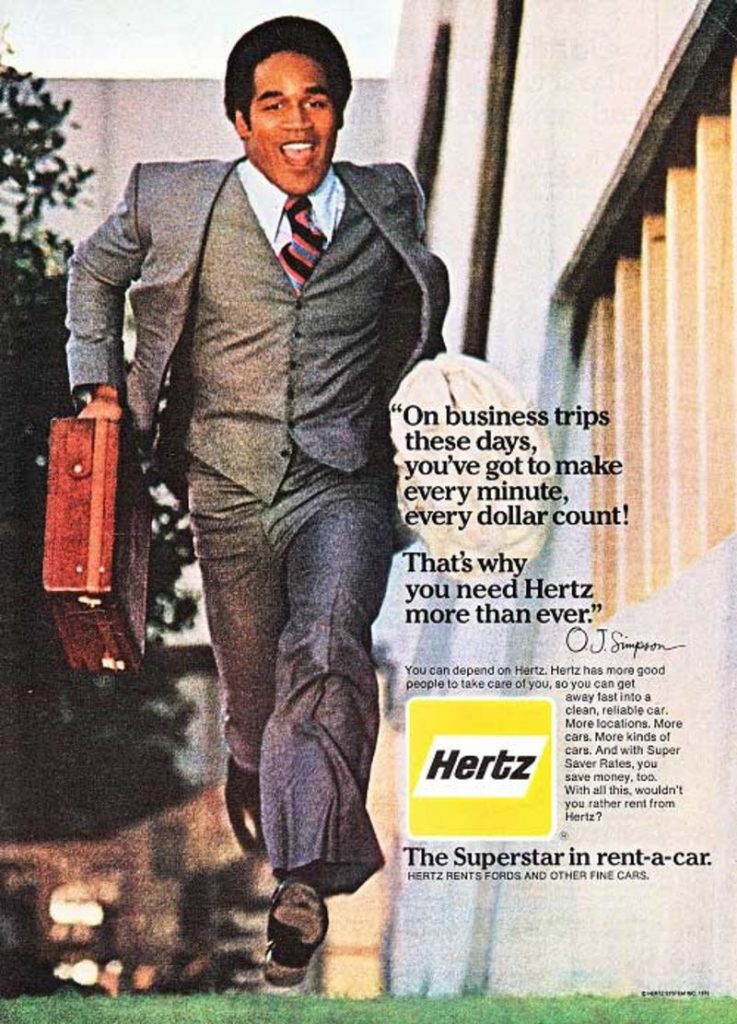 Janet duly calls in the head of Pax for interrogation, only to discover that the evil dude pulling all the strings is someone very familiar. 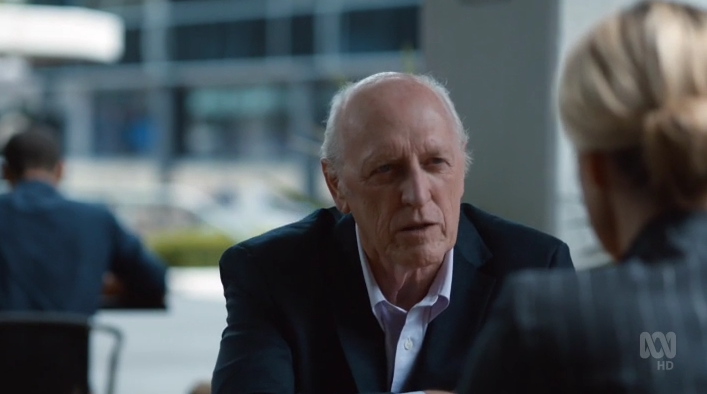 JANET, I AM YOUR FATHER. 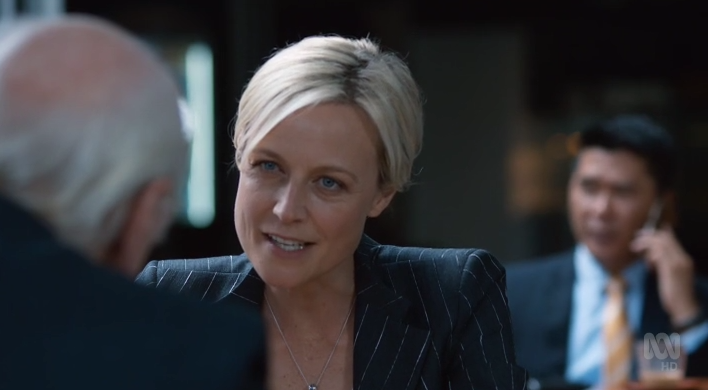 NO! MY MOTHER MOLDED ME FROM CLAY AND ZEUS BROUGHT ME TO LIFE! I HAVE NO FATHER!

In my experience, there are two kinds of relationships that lesbians have with their dads. One is the certainty that he is the finest man on Earth, and if the rest of the gender were more like him, maybe things would have worked out differently. The other is that he is a monster to be regarded with the deepest contempt, and one could find no better compass for one’s life than to point it in the opposite direction of HIM.

Janet falls into this second camp. She has not spoken to her father in years, had no idea he was currently running Pax, and would never forgive anyone who suggested that, in spite of herself, she did manage to absorb some of his ferociously competitive nature. 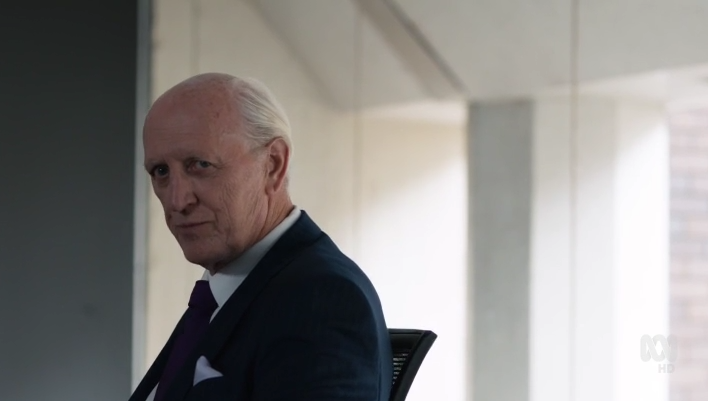 IF YOU’RE NOT ON TOP, YOU’RE FAILING. 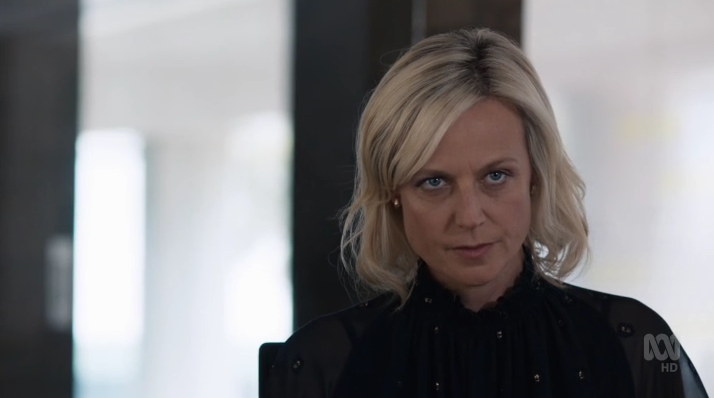 WELL JOKE’S ON YOU, BECAUSE BIANCA AND I TAKE TURNS BEING ON TOP.

When Tony learns that this Sith Lord dude is Janet’s dad, he advises her to recuse herself from the case. But Janet is like “Don’t worry, I won’t go easy on him. IN FACT, I RELISH THE OPPORTUNITY TO DESTROY HIM UTTERLY.” Tony, of course, realizes that blinding hatred isn’t ethically preferable to filial devotion, but knows better than to contradict Janet when she is in one of her moods.

Through Janet’s dad, we learn that Pax granted the Devils football team a very generous sponsorship, even when they were ranked dead last. And funnily enough, as soon as they had Pax on their side, the team started winning, almost as if someone was pushing, threatening, and bribing whoever stood in their way. Now who do we know who is that unstoppable when there is something they want? 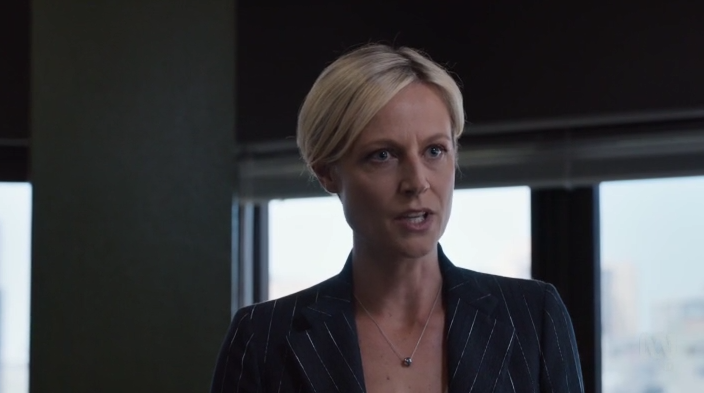 The dual-sport scandal heats up even more at Devils practice, when young player Tyler Perati confronts the two jerks who filmed their assault on his sister. Nate Baldwin stomps over, apparently trying to break up the fight, but manages to kill Tyler with a single punch. 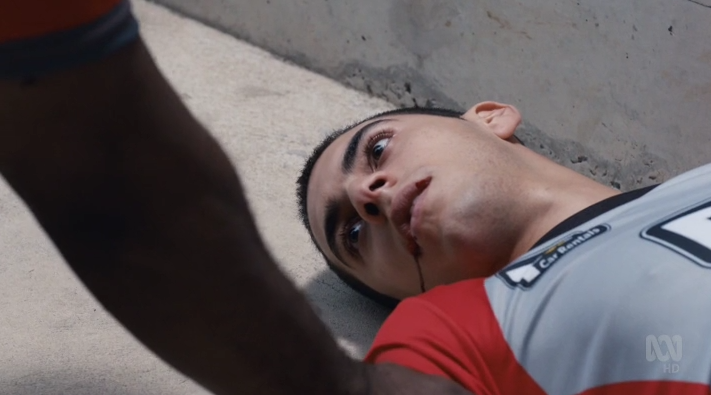 This unexpected addition to the body count puts several plots in motion all at once. For one thing, it forces Richard to interrogate his culpability in Tyler’s death, owing to his refusal to do anything to stop the original assault. And that is an awesome way to start a conversation about toxic masculinity, and the way “good guys” contribute to it by refusing to call out other men. 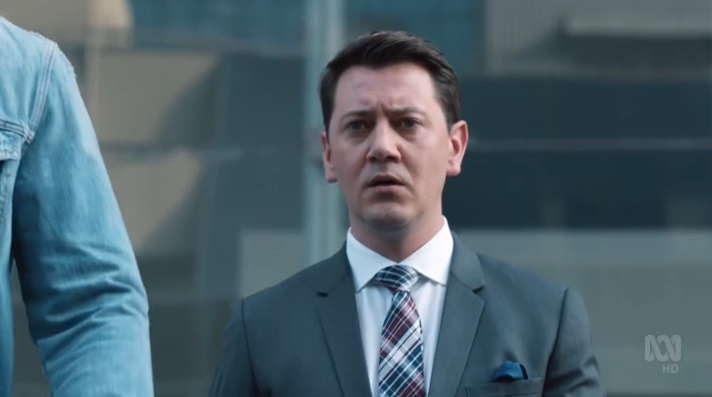 DOES THIS MEAN I HAVE TO TAKE “MALE FEMINIST” OFF MY TINDER PROFILE?

For another thing, it puts Nate Baldwin, who already had a history of assault, in the hot seat. I actually love Nate’s character so far, because it literally never occurs to him that he has done a terrible thing. The world has convinced him that he is a god, free from human accountability, based on his ability to kick a ball. Which is another awesome way to talk about toxic masculinity, and the horrifying behavior it excuses in men who project virile strength. 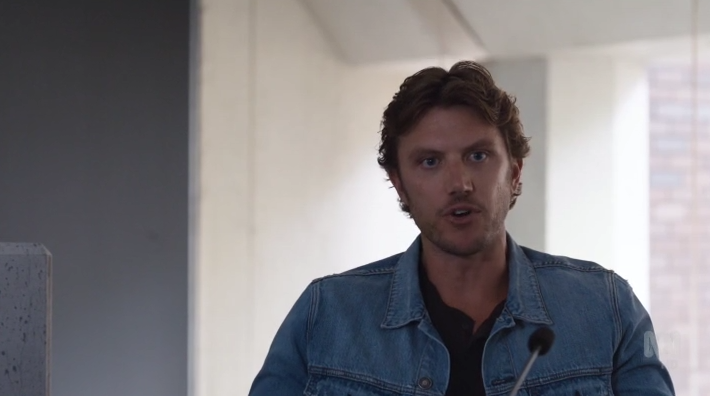 I AM AN ATHLETE! THAT MEANS I CAN GET AWAY WITH RAPE, MURDER, AND THIS DENIM JACKET!

For a third thing, Tyler’s death ends up hurting his sister the most of anyone. The video of her assault leaks to the press, and Twitter responds with the kind of victim-blaming that would seem cartoonishly cruel, if it did not happen every single day. 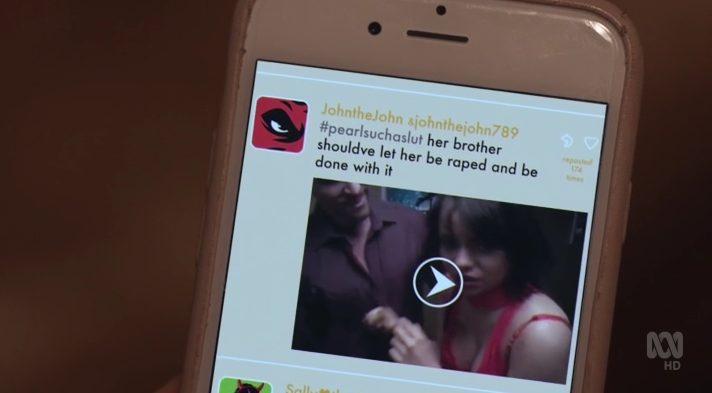 SOMEONE HAS REALLY GOT TO REVOKE TRUMP’S TWITTER PRIVILEGES.

It’s her fault for being at the party, for wearing that dress, for not just meekly letting herself be raped. It’s her fault her brother is dead, and Nate is in trouble, and she is costing the team their season, the dumb bitch. Her own mother and her gross stepfather blame her for costing them the money Tyler might have made. And all this violence and cruelty, as Janet keeps reminding us, are about nothing more than a group of adult men kicking a ball. As opposed to “match-fixing,” which was our entryway into this world, these storylines have shifted to the much more recognizable problems sports bring out in people every day.

That’s the kind of richly-textured writing I love from Janet King, and it’s immensely reassuring to see them taking the sports storyline in such an ambitious direction. (Still don’t see why we couldn’t have stuck to one sport, though.)

Tyler’s death also pushes the plot in one more way. His autopsy reveals that his platelet count was suspiciously low, which may be why he was killed by a single punch. Janet suspects Tyler may have been using some next-generation performance enhancing drugs, so she goes to the team’s biologist to check it out.  That guy is running a super creepy operation, that seems to combine the worst qualities of a new age cult and an evil laboratory for creating supervillains. 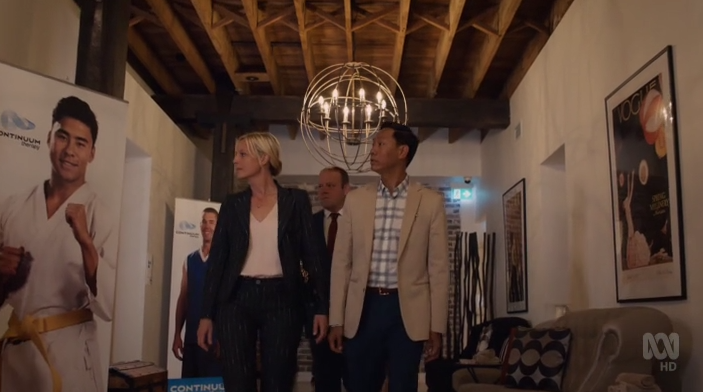 SO HERE WE HAVE THE THETAN-REMOVAL CHAMBER, AND JUST IN THERE IS WHERE WE REPLACE YOUR BONES WITH ADAMANTIUM.

I’m sure we’ll be seeing more of him.

Much like in seasons past, Janet’s professional life takes the bulk of our attention, but her personal storyline runs parallel, and quietly equally weighty themes. First of all, there is the matter of Bianca feeling increasingly locked out of Janet’s innermost heart. This manifests in a couple different ways.

Firstly, Janet’s daughter draws a family picture, which includes her brother, Janet, and even Tony! But no Bianca. 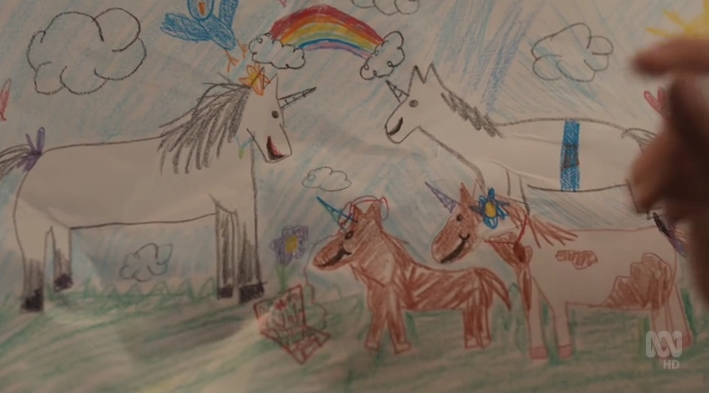 THIS IS NOW THE OFFICIAL POSTER FOR MARRIAGE EQUALITY AUSTRALIA.

When the kids are scared or lonely or misbehaving, Bianca so badly wants to get in there and parent! But she’s waiting on a cue from Janet that never comes. Anita Hegh’s performance in these scenes is so unshowy that you can plausibly buy that even Janet is oblivious to the ways she is Fucking This Up, which makes it all the more heartbreaking. 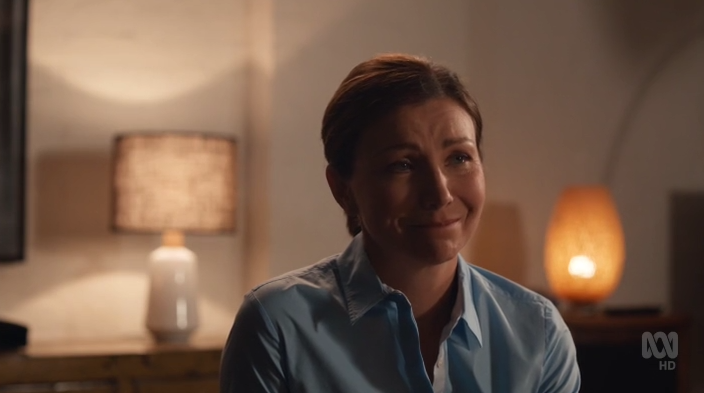 THE FACE OF A WOMAN WHO HAS HAD U-HAUL ON SPEED DIAL FOR TWO YEARS.

When Janet’s father appears on the scene, Bianca is pretty floored that Janet never thought to mention that he existed. Bianca is right to feel left out, but she’s mistaken in attributing that feeling to Janet’s lingering grief over Ash, because Ash felt exactly the same way. Janet’s ambition and lack of tolerance for weakness (in herself or anyone else) have always hampered her intimate relationships, and even having only met her father for five minutes, you can tell she gets it from him. In defeating him this season, hopefully she can also defeat that part of herself, and let Bianca all the way in.

Regarding Janet’s kids, I’m starting to get the distinct sense that she has hung all her hopes and ambitions on her daughter, and is increasingly ignoring her son. She pushes the girl to be a star athlete, and lets the boy play video games past his bedtime. However, one of those games ends up coming in handy, when Janet realizes that it may have recorded the mysterious visitor who showed up the night before Clay’s death. 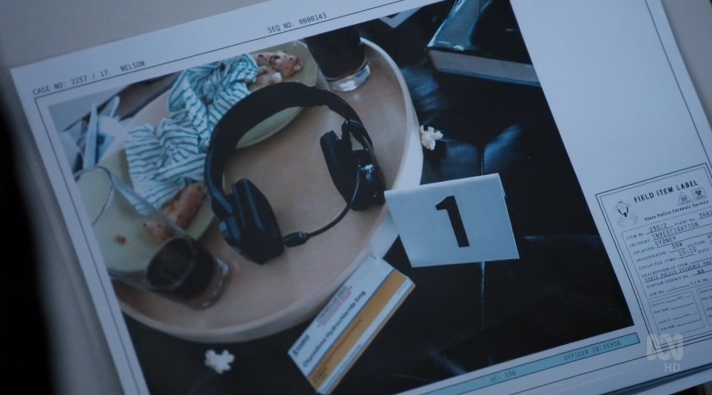 WHAT A RELIEF IT IS TO BE CONSTANTLY MONITORED BY ONE’S DEVICES!

Sure enough, the tape reveals a conversation between Nate and his guest, who says to Clay’s face what Twitter trolls mostly say anonymously: KILL YRSELF. Nate promises to take all the blame for the match-fixing, but his guest sadly tells him that there is simply too much money on the line for Nate to stay alive, and if he doesn’t take himself out, then it’ll be his son who pays. The creepiest thing about this scene is the bizarre affability with which Nate’s visitor relays all this, as if Australians cannot help being cheerful and friendly even when they are functioning as the ANGEL OF DEATH. You would literally not know they were not inviting you to a barbecue until the moment your heart stopped.