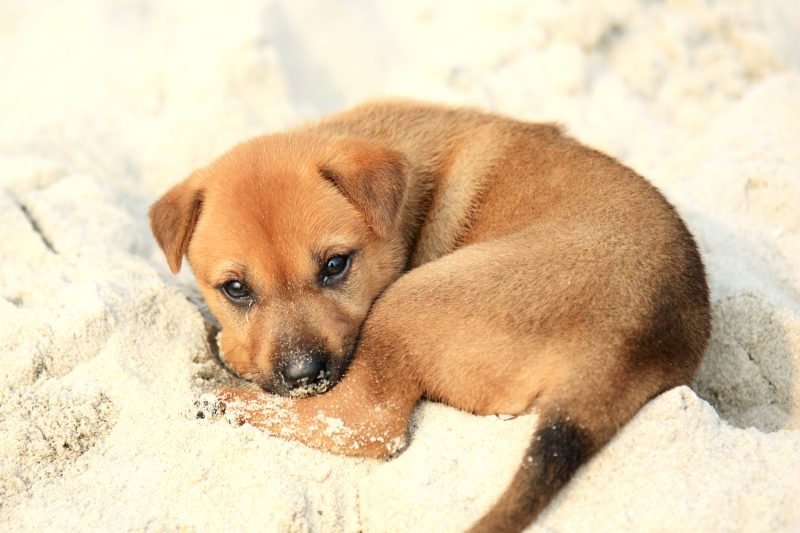 So, at our house we have been going through the long and difficult process of finding a puppy. “Ooh, that must be so much fun,” people say when you tell them you are puppy-shopping. WRONG. It is not fun. It is the following scene from Jerry Maguire, with Cuba Gooding Junior in the role of the puppy.

Our search has taken us to innumerable shelters throughout the state, where we felt varying degrees of awfulness as we walked away from dogs, which were no doubt good and loyal creatures, but which were nevertheless not our dog. It has also taken me deep into the bowels of Craigslist, a site that runs on desperation the way Wall Street runs on cocaine.

The Craigslist pet section is a catalogue of human failure and its non-human victims. I have rarely felt such a conviction that all humans deserve to be eaten by spiders as I have when perusing the ads for dogs people that are trying to “rehome” (a word that, like “fake news” started out meaning a specific and valid thing but which has since been hijacked by morons who use it to mean whatever they want). The most common story is: “We adopted this dog when it was three months old because we like stuffed animals and also Air Bud. It is now a year old, has tripled in size, and failed to show any promise as a point guard, so we would like you to take it away. For three hundred dollars.” The post is invariably accompanied by a picture of the dog gazing trustingly into the camera, with no clue whatsoever that this photograph will be used to tear it away from everything it knows and loves.

I’m going to spare you a tour of those ads, but I would like to share a similar one that encapsulates the same narrative, to an even more ludicrous degree. I give you: 12 LITERAL MONKEYS 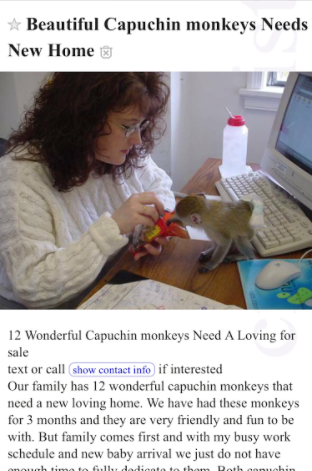 So there’s a lot to unpack here, but let’s start with the number. Twelve monkeys. Sprang for the dozen, eh? What happened there? Didn’t want to get your feet wet with one or two or seven monkeys, to see if the monkey lifestyle was right for you? Do you only buy animals like you buy eggs? Is this all an elaborate homage to the 1995 film 12 Monkeys and its spinoff of the same name?

But moving on from the number, let’s dive into your story. The monkeys are great, you swear. So fun. Like tiny human babies with the faces of old men. The three months (A NUMBER SCARCELY LESS STARTLING THAN THE TWELVE MONKEYS THEMSELVES) you’ve spent with them have been magical. But, you sigh, “family comes first” and you have a real baby coming now to replace your dodecatuplets, a decision you apparently arrived at sometime during the last three months. And of course there is your busy full-time career as a 1995 role-player, complete with hairstyle, sweater, and desktop computer.

The full text of the ad is cut off because it was flagged for removal by Craigslist, which comes as a slight relief, but still. I am ready for the animals to rise up against us. I will allow my body to be ripped apart by all twelve capuchin monkeys; god knows they have earned it.

Aside from the truly heartbreaking stories of wronged mammals, Craigslist has also acquainted me with pet enthusiasts of a somewhat more unusual nature. 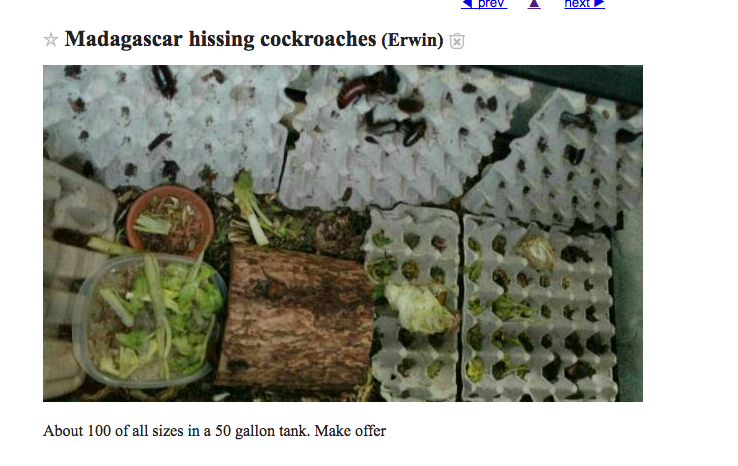 That’s right, if you’ve ever thought “gee, I love cockroaches, but I wish they made a sound at me,” then this is your lucky day. There are “almost 100” of these beauties just itching to live in your home and escape from their tank and join forces with the monkeys and take over the world. Make an offer. The bidding starts at your sanity.

Finally, as with any site one is obligated to visit many times, I’ve started to get a feel for the Craigslist pet community. Recognize the old faces. There is “guy still looking for dog that ran away three years ago.” There is “SCAM ALERT: DO NOT TRUST SHARON,” whose words of wisdom have really been quite helpful, though Sharon herself has never materialized. And then there is my personal favorite, a poster whose ads comprise a single word, repeated roughly eight times per day.

I have not clicked on any of them, because I do not a want a pigeon, or god forbid, multiple pigeons, but I truly hope this person finds someone who does.

Now you: share your favorite Craigslist post (doesn’t have to be pet related) in the comments. If you don’t have one in your back pocket, log on to your local chapter and search for fifteen minutes. I guarantee you will learn a lot.