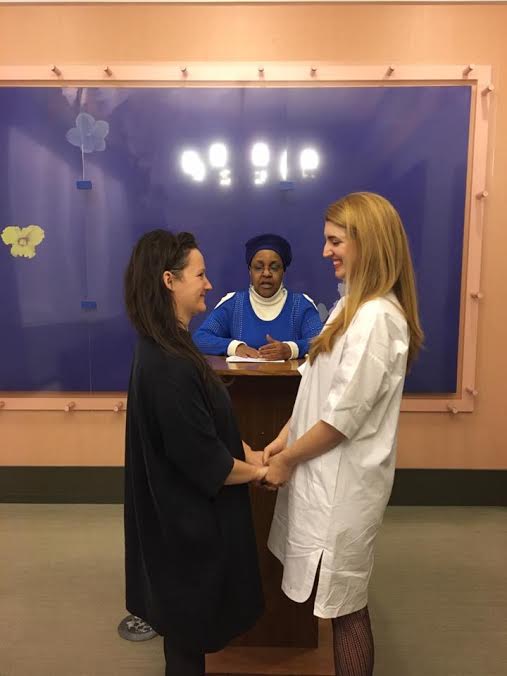 The R train was almost silent on Inauguration Day. It was rush hour, a little after 7:30 am, but people were somber. I felt that, but I was also excited, heading to the Manhattan City Clerk’s office to pick up a marriage license with my girlfriend, Jessi. We’d been talking about getting married for over a year, but never made any concrete plans. When Trump was elected with an apparent desire to roll back any measures of equality gained over the past 8 years, we felt a new sense of urgency. So, with very little planning, we found ourselves heading downtown before work to do the necessary paperwork to make it official.

My relationship to gay marriage has been complicated. In 2005 I was part of an activist group called Queer Fist, which held theatrical “weddings to the state” on the steps of government buildings, got arrested for mass kiss-ins at Union Square, and plotted dance parties to disrupt homophobic right wing gatherings. Our position was that a gay rights movement needed to be resistant to state sanctioned assimilation, and needed to be linked to a broader human rights movement, including fights for the rights of immigrants, detainees, and victims of the war on terror (groups which all contain LGBTQ people).

I still harbor many critical beliefs about America’s institutions, but I also don’t think in such binary terms anymore. I was not as excited about the Supreme Court ruling on marriage equality as some of my favorite allies would have preferred, but only because I never thought LGBTQ marriage should have been the sole focus of the gay rights movement. Of course all people should be able to get married regardless of gender identification and sexual orientation, but I was worried that having the argument framed that way–as separate from job and housing discrimination policies, as separate from a broader human rights movement of solidarity with other marginalized people–would really end up benefiting the wealthy, white gay people who’d donated the most. I worried that forcing LGBTQ people to prioritize the two-person family unit prized by heterosexual society would rob us of the sort of distributed networks of care I’ve always experienced in queer communities who piece together their own families and households.  And I was afraid that the organizations that had formed around making marriage their sole focus would disband after the ruling.

I’d been worried that once marriage equality was made law, that suddenly marriage would be expected of me. Queer love is beautiful, in all its numerous expressions; I just want to make sure other forms of love, romance, and care are valued as strongly as marriage. That freedom is something that has always made me the most proud of my queer identity. While there is a soul-crushing effect of being denied entry to certain cultural rituals, there was also a freedom in knowing that the normal template was not applicable to me. But what I learned through getting married to my partner last month is that even with legal marriage, we were still free to make the ritual and its bureaucratic necessities our own.

We first decided that we wanted to get married years ago, while on an East River dinner cruise held on a madeover 1930’s Navy boat captained by a lesbian from New England. The sun was setting over the industrial coast of Brooklyn and I honestly can’t remember who said it to who or if we said it at the same time but I’m pretty sure we just turned to each other and said “let’s do this forever.” We’d been together for over three years, had been through a lot and still maintained a sense of refuge in each other, and maybe more importantly a sense of humor. A few months after we first met, we both lost our jobs, which launched our fledgling relationship into a summer of unemployment, food stamps, and turbulent living situations. I really loved my job, and I sank into a pretty deep depression when I no longer had that community. But Jessi was always there to make me laugh. When we decided to get married, it felt less like an attempt to move our relationship to a new level and more like a confirmation of something I’d felt in my gut fairly early in our relationship. We felt no rush for planning a wedding, so we bought some rings and told each other that someday, when we’d saved enough money, we’d throw an awesome party on a boat or in an apple orchard to celebrate each other and our favorite people. 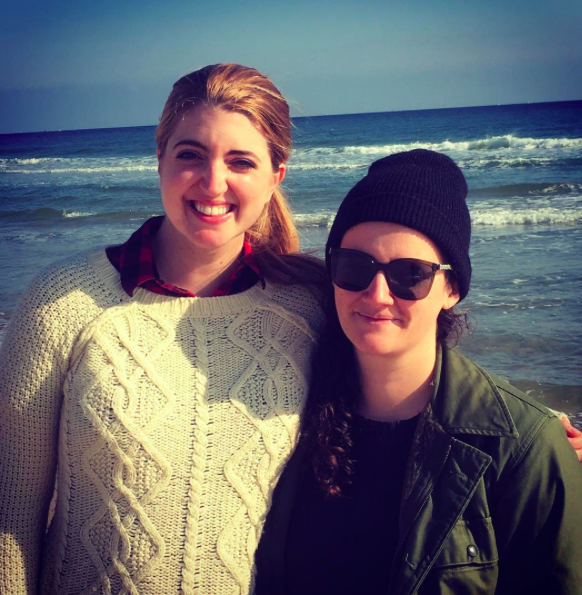 That timeline shortened when Trump announced his candidacy. I didn’t have the political optimism of those people in my life who were certain Clinton would win. On election night we went out bowling with friends because we didn’t want to spend all night glued to the screen, watching pundits speculate. I remember coming home at 11, putting on the news and seeing the crestfallen faces of the reporters commenting on the returns. The sudden realization of what was happening grabbed me in the gut, and I felt my stomach turn.  I spent a few weeks processing and feeling bewildered. When I emerged from that sense of mourning, I was ready to strategize. I felt clear from talking to various networks of activists that the hammer of hateful policy would come down on undocumented immigrants and Muslims first, but with an actively anti-LGBTQ Vice President like Mike Pence, I felt uncertain about our own future as well.

There was an immersive, surrealism-themed party happening at a hotel in Midtown a week after inauguration. Surrealism was a response to the trauma and social upheaval surrounding WWI, so something felt very appropriate about spending the weekend in a hotel where people would be dressed like Dali paintings for a few days.  What if we got married on the Friday before the surrealist party, and made that our honeymoon? We’d need to pick up the license at least 24 hours before an officiant would render us legal in the eyes of the state, so what if we did that part of it on Inauguration Day? Why not? Everything was so over the top already, what if we engaged with the world in a similar way? We didn’t want to be flippant about it, or minimize the very real damage that Trump was doing to communities we care about. But we wanted our wedding to be like how we try to be in the world: life-affirming and absurd, with a sense of humor.

We didn’t actually “seal the deal” on inauguration day, but we did go to the Manhattan City Clerk’s office to pick up the marriage license. We woke up at 7 a.m. since we had to get it all done before going to work, and took the subway from our apartment in Queens to City Hall. The line was almost out the door from the moment they started letting people into the marriage bureau. The variety of couples was as diverse as you would imagine in New York City, in age, gender, race, and nationality. There were couples dressed down in corduroy and gingham, and a Russian wedding party in their finest suits and dresses, all wearing sunglasses. It was Lower Manhattan in an orderly, gilded nutshell. A clerk told us that Fridays are always busy, but the crowd on January 20th was exceptional. There was a sense urgency, of trying to find some solid ground amidst the chaos. I felt an affinity with all the other people waiting in that line. It was “our day” as a couple but what I really loved was the unspoken sense of shared experience with the other people there to celebrate love in their own ways. 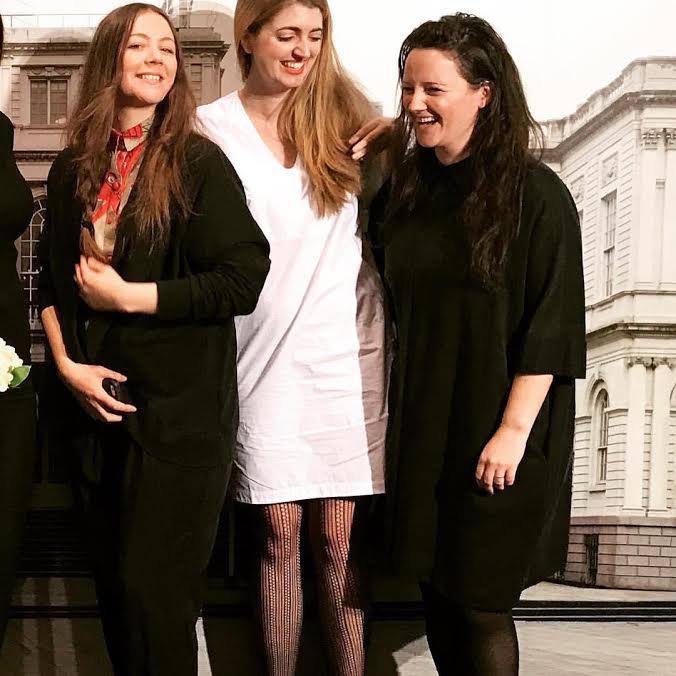 After passing through the metal detectors and filling out some paperwork, we were issued our license. That alone felt a little like fending off the incoming administration with a stick. The week between picking up the license and returning for the ceremony was filled with a constant influx of horrors from Trump’s White House, rapid-fire executive orders and disheartening confirmation hearings. I was familiar with this sense of disgust at what our country was doing to other people in the name of “freedom” from George W Bush’s response to 9/11 and Obama’s drone wars, but the anxiety about Trump and his administration carries a decidedly more disordered feeling. At least now I had a foundation to sustain me. I know paperwork or validation from the state does not make our relationship “real,” but I am also aware of the value of ritual. We took something traditional and made it personal to us, made it timely. Actively deciding how to engage with this cultural rite of passage brought the whole week alive.

The following Friday we brought our friend Caralee back down to the city clerk’s office so she could be our required witness. While waiting in line we overheard that the people behind us, a couple named Frank and Sara who were wearing matching Converse high tops, hadn’t brought a witness, so Caralee volunteered to be theirs as well.  We all talked and laughed in the little vestibule between the two chapels, and even though we’d been pretty casual about the whole last minute affair, I felt a rush when we were called in for the ceremony. It lasted all of three minutes in the tiny peach-colored chapel. I appreciated how direct it was. Do we? We do! Afterwards we took pictures against a photographic backdrop of City Hall with our new friends, and headed to a diner for wedding pancakes. My new wife and I both worked half-days at our respective jobs (She’s at Buzzfeed, and I do outreach at Idealist.org), but we sent out a last minute invite for folks to drop by Grand Central Station that night if they could, where we gathered at a pizza bar in the basement.  As a small gay kid growing up in suburban NJ, I’d never dreamed about what my wedding would look like, but a spontaneous gathering at a basement pizza bar is, for me, about as perfect as it gets. 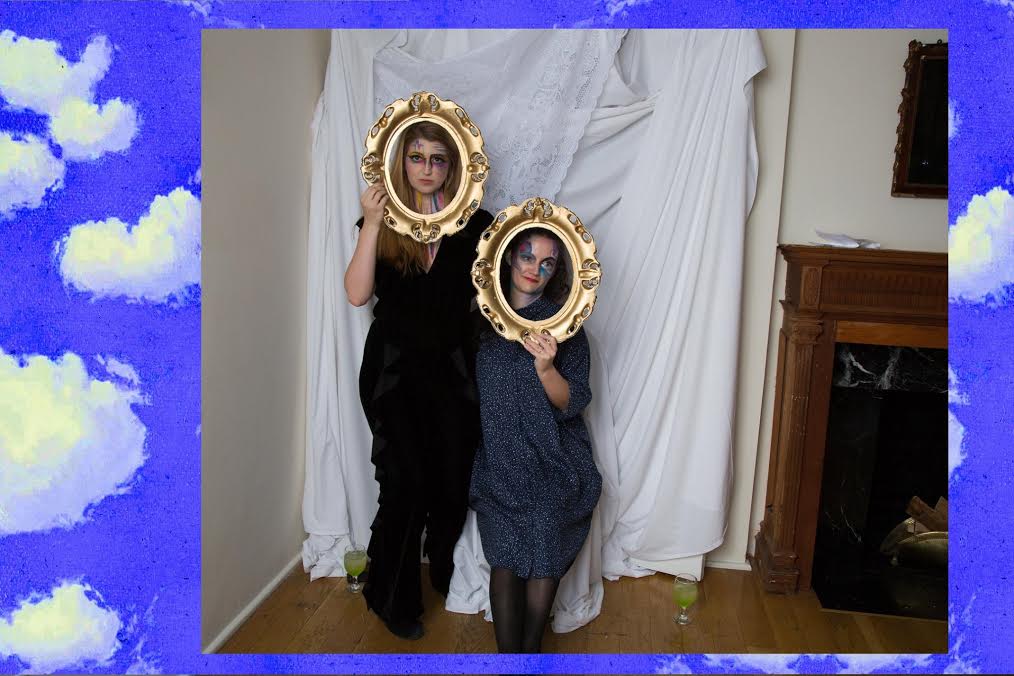 I have no illusions that being queer in and of itself a form of resistance. Our identities might be politicized, but LGBTQ people can and do contribute to systems of oppression like racism and xenophobia. Being gay does not inherently sensitize a person to the struggles others might experience, but it can help, if you are willing to make that leap and open up.

I have no interest in saying that getting married to my partner was itself an act of resistance. What I do think embeds us in a resistance movement is the decision to strengthen bonds and love fiercely in the face of an administration that seems bent on leaving us alienated and afraid. Giving our friends an opportunity to come together and party with us over something queer, felt like a celebratory fuck you to Mike Pence and the Trump administration. Giving ourselves something to be happy about that week felt like radical self-care. What we do with that strength, that support, and that foundation is to fight like mad for our friends and communities.

Caroline Contillo is a writer, activist, and meditation teacher based in New York City. She is interested in the places where art, social justice, and mindfulness intersect, and has a particular interest in finding ways to uplift and sustain these practices. She also loves sci-fi, riot-grrrl nostalgia, and cooking for people.  Twitter, Instagram, Facebook, Website/tumblr