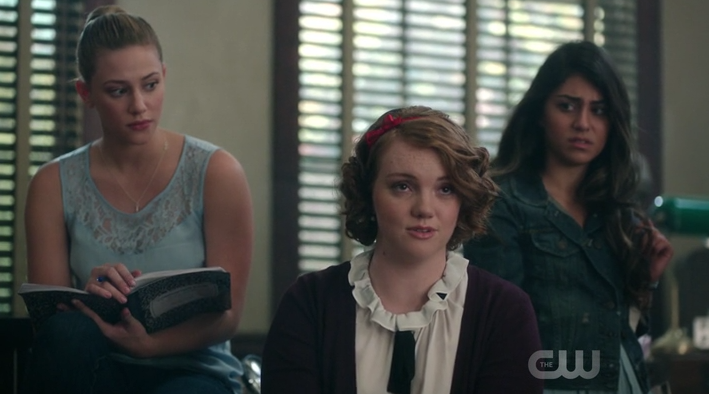 Hiya folks. I caught a cold in Puerto Rico (my version of “I Took A Pill In Ibiza”) so my energy and enthusiasm for the machinations of Riverdale’s terrifying teenagers are at a low ebb. With that in mind, this recap is going to predominately focus on one of this episode’s storylines (“Mistress Betty and Barb’s Revenge”) and give relatively short shrift to the other two (“The Case of The Survivalist Scoutmaster” and “Archie Andrews Speaks To The Black Experience”). So let’s just go ahead and get the boys out of the way.

So we left last week with Cheryl Blossom slipping her porcelain wrists into a pair of handcuffs with the air of a girl who’d done it before. As this episode begins, she’s led off to the principal’s office to be questioned about her role in Jason’s murder. She admits that she hasn’t been completely honest about what happened the morning of July fourth. Or at all honest, in fact.

It turns out that Jason had chafed under his parent’s supervision (and with skin like that, most fabrics), and had planned to fake his own death to escape Riverdale. 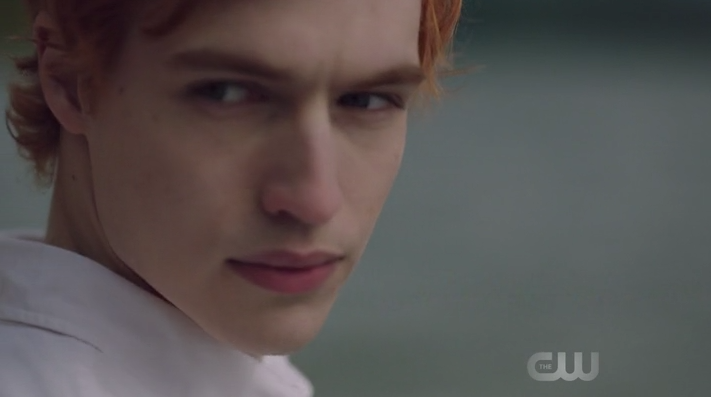 I HEARD THERE’S A PLACE CALLED RAVENWOOD FOR KIDS LIKE ME.

So on the morning in question, the twins rowed over to the Greendale side of the river (where true nerds know that Sabrina the Teenage Witch lives) and Jason left. As far as Cheryl knew, the plan went off without a hitch, so it came as an extra shock to her when his body turned up in the river with a bullet hole in its forehead. Speaking of bullets, this revelation leads Archie to finally come clean about hearing a gunshot that morning, although he manages to leave Ms. Grundy out of it (for now). But when Archie’s dad finds out Archie has been keeping things from him, he grounds him for two whole weeks! 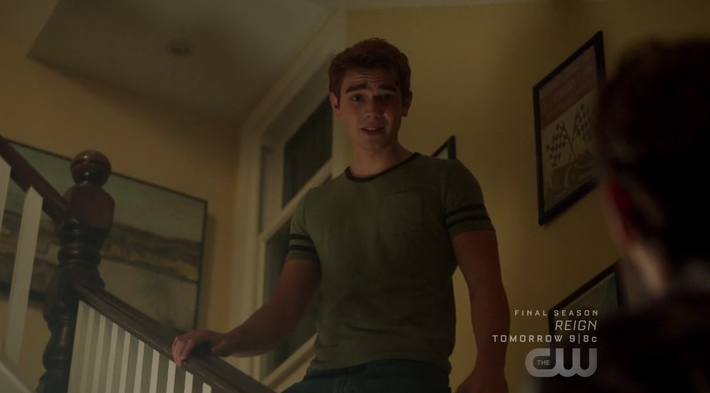 BUT DAD, ALL I DID WAS LIE TO YOU AND THE POLICE!

But Archie’s spirit can no more be constrained by punishment than his abs can be constrained by shirts, and he sneaks out of the house to sit in on a Josie and The Pussycats rehearsal. (This privilege and honor is his gift from Cheryl Blossom for telling the police about the gunshot.) The Pussycats are initially pretty hostile to this white, straight, male interloper in their black, queer, goddess circle, and Josie questions how Archie could possibly write music relevant to her perspective. 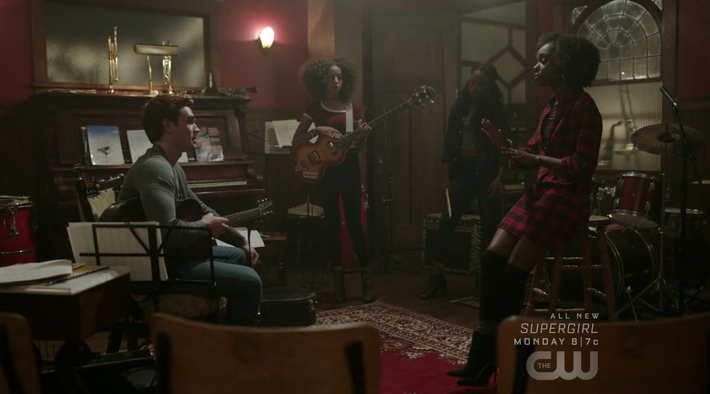 I’M NOT SAYING “STAY IN YOUR LANE” SO MUCH AS “DON’T RIDE YOUR UNICYCLE ON THE FREEWAY.”

But Carrot Top proves his worth by penning a line out of his deep reservoir of sexual feelings, and just like that: white boys all across the country find the courage to speak out when they have specifically been told to sit still and listen.

Of course, I might be a little less sensitive to Archie and the girls bonding over lyrics if I weren’t wary of this showrunner and these writers’ ability to speak to the queer female experience, having done no more so far than to apply it like so much Cover Girl lipstick. Anyway, Archie sneaks out again to hear the song performed at Riverdale’s local cheese fair, and while he’s listening for his immortal line to be sung, Ms. Grundy informs Mr. Andrews that Archie really is a singular talent. 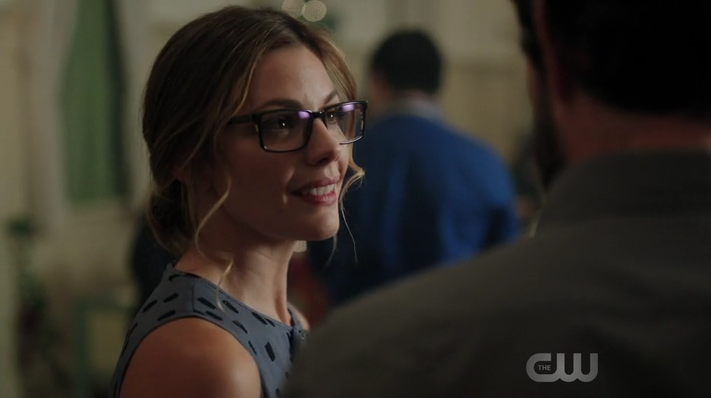 In light of this, Mr. Andrews converts his shed into a studio for Archie, because this show really thinks it can handle two musical storylines. 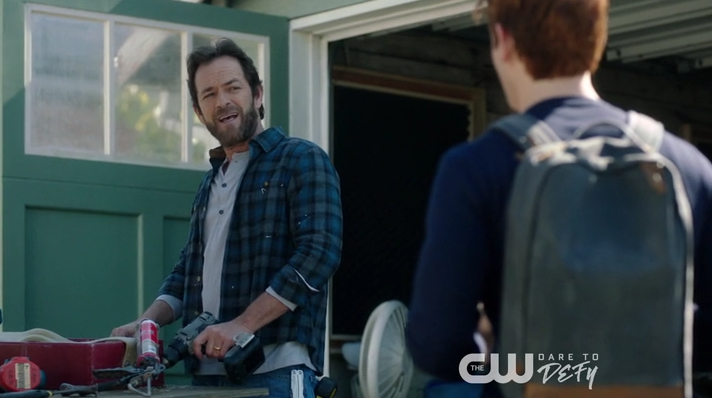 Meanwhile, Betty, in an amphetamine-fueled fit of righteousness, decides to restart the dormant school paper, and recruits Jughead to be her star reporter. They are actually the perfect team for this project, since Betty possesses boundless editorial energy and Jughead possesses the genuine desire for everyone to hate him crucial to every journalist. 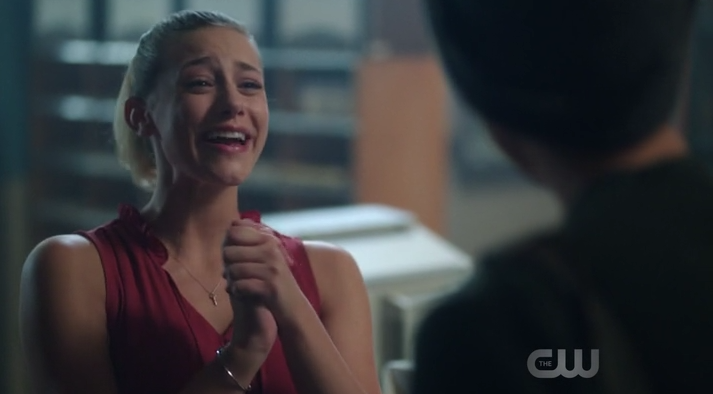 Their big story, obviously, is Jason’s murder, and their big lead is the scoutmaster who found Cheryl shivering on the banks of the river. After some cold-blooded interrogation, Jug finally gets the truth out of the kid. 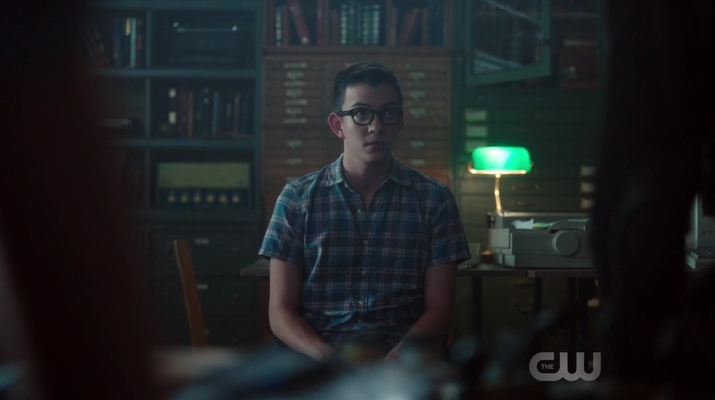 PLEASE JUST LET ME GO BACK TO THE WES ANDERSON MOVIE WHERE I BELONG.

It turns out that it was this rabidly paranoid scoutmaster who had fired the gun, in an effort to teach his charges how to fight off zombies/Westworld hosts/Nazis. But in exchange for keeping that quiet, he tells Betty and Jughead something even more valuable: he saw Grundy’s car by the river that morning. As Jug’s narration dryly informs us, that information stamps Archie and Grundy’s relationship with an expiration date that should be coming due next week.

Okay but on to the good stuff.

So this week, Veronica indulges the romantic attentions of Chuck Clayton, a young man with more abs than I have time to count them. 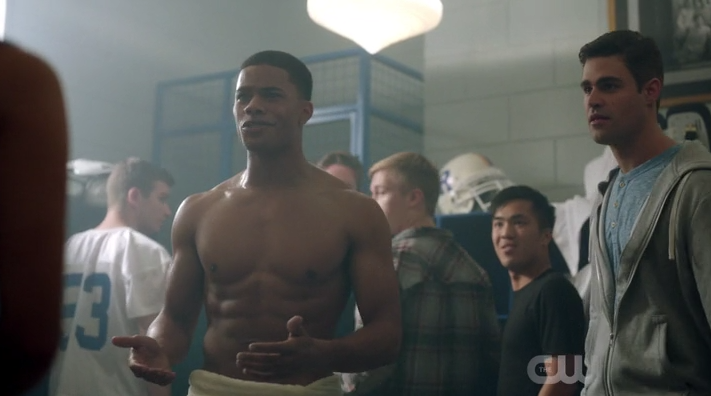 They go on an average-ish date to Pop’s Chocklit Shop, which brings me to a small but important sidebar: STOP SHOWING THESE SKINNY, MODEL-CHILDREN POUNDING BURGERS AND INHALING MILKSHAKES. It’s not only unrealistic but actually destructive to keep hammering home the message that ideal teenagers look like this but eat like that. Riverdale can’t be both the town where time stopped and metabolisms mysteriously race at lightning speed.

But I digress. The next day, the whole school gets an Instagram Scandal Alert that Chuck gave Veronica a “sticky maple,” which I guess is a weird local code for jizzing on her face. 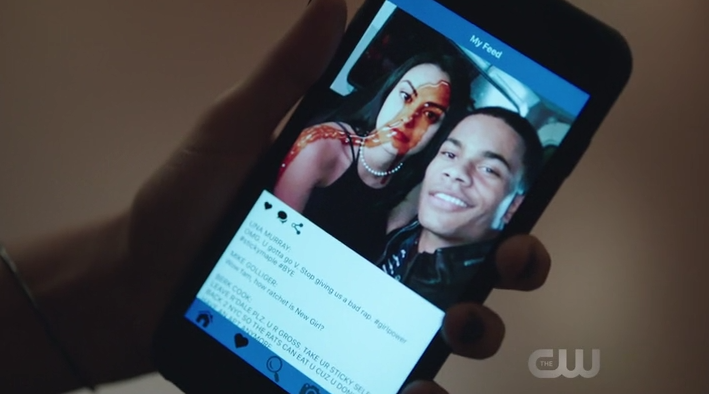 I MEAN, THERE’S WHIPPED CREAM, OR VANILLA ICE CREAM, OR EVEN MUSTARD, BUT FARBEIT FROM ME TO CHALLENGE YOUR WHOLESOME, ALL-AMERICAN SLUT-SHAMING.

They soon discover that Veronica is far from the first victim of Chuck’s destructive sexual braggadocio. It turns out that much of the football team maintains a “playbook” of their (supposed) sexual conquests, and they’ve used it to destroy the reputations of many Riverdale girls.

The first one to come forward is Ethel Muggs, AKA Shannon Purser, AKA BARB!

I HAVE RETURNED FROM LESBIAN HEAVEN, FOR IT WAS TOO CROWDED.

Ethel’s character is being rescued on a number of levels, since in the comics she is usually portrayed as the homely (and therefore worthy of scorn and ridicule) girl in constant pursuit of Jughead’s nonexistent affections. Here she is smart, pretty, and just evil enough to have a fighting chance at surviving the season.

When the gang finds the “playbook,” Betty is shaken up to see her beloved sister Polly’s name listed as one of Jason’s conquests. Cheryl is also shocked, though we don’t know if it’s because she thought Jason was a better feminist than that or is just upset he cheated on her. When Betty sees Polly’s name, she undergoes an instant transformation from seeking justice to seeking revenge.

She puts on some of Polly’s bad girl lipstick and tells Chuck that she no longer wants to be Jane The Virgin. 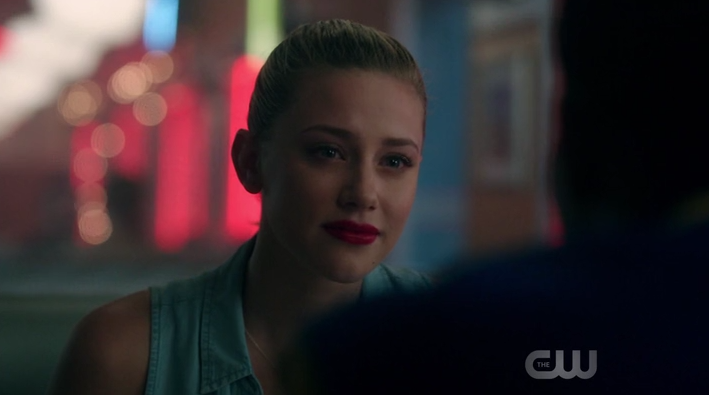 She invites him to Ethel’s house, because it has a pool and hot tub, and he agrees, because he is an idiot.

When he arrives, Veronica is waiting for him, and even that doesn’t get him suspicious! 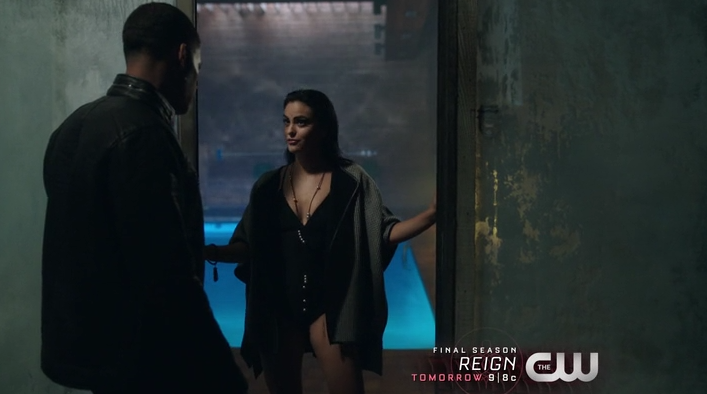 SKETCHY THINGS ABOUT THIS HOOKUP THAT EVERYONE JUST IGNORES.

Chuck and Veronica get cozy in the hot tub, when out stalks MISTRESS BETTY, PRINCESS OF PAIN. 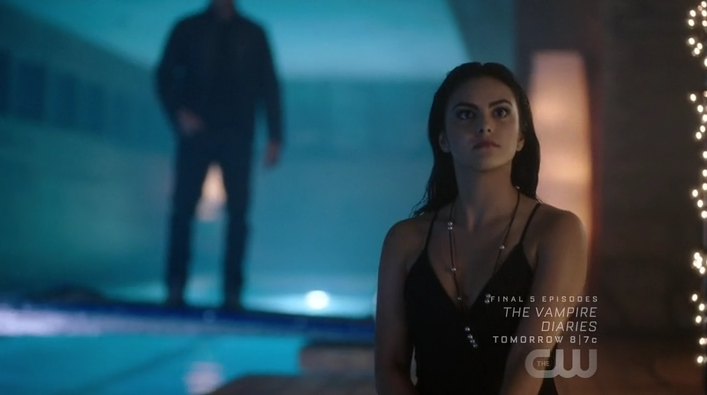 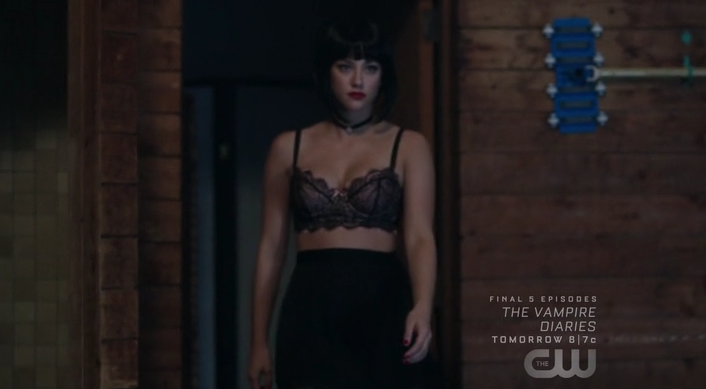 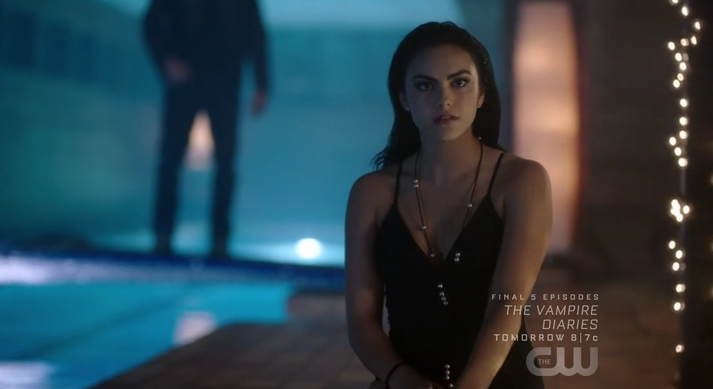 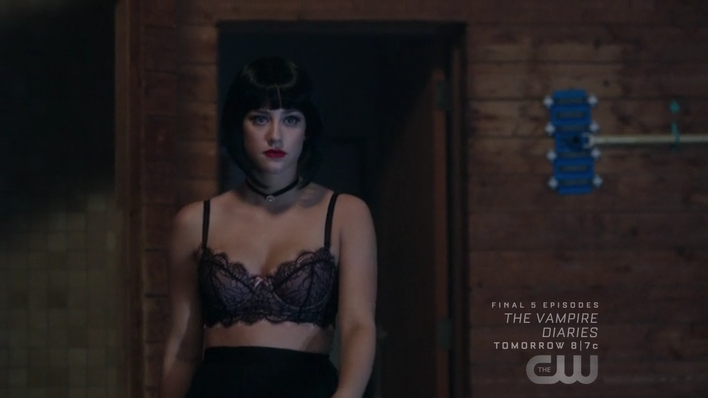 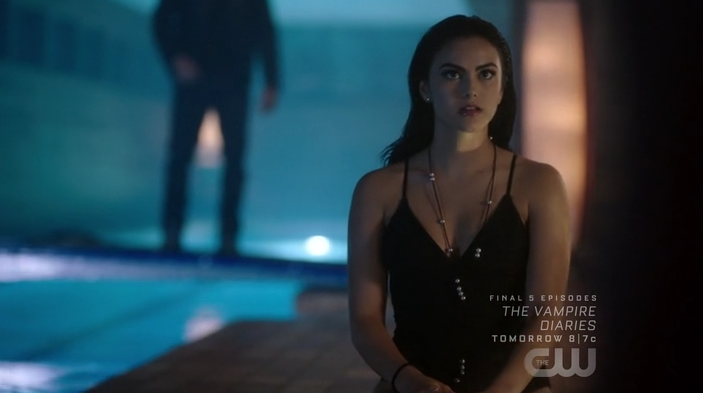 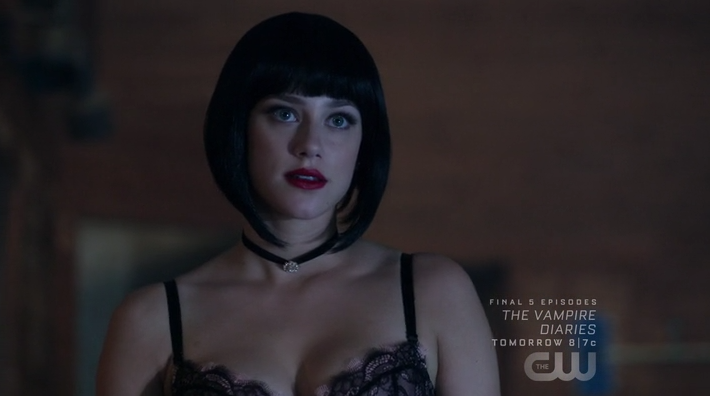 B&V (for so they shall henceforth be known) first get Chucky drunk, and then Betty slips him a muscle relaxer. At this point Veronica is like, “hmm maybe we’re going a bit too far in becoming the thing we hate.” But Betty pays no heed, and once Chuck passes out, they handcuff him to the hot tub. 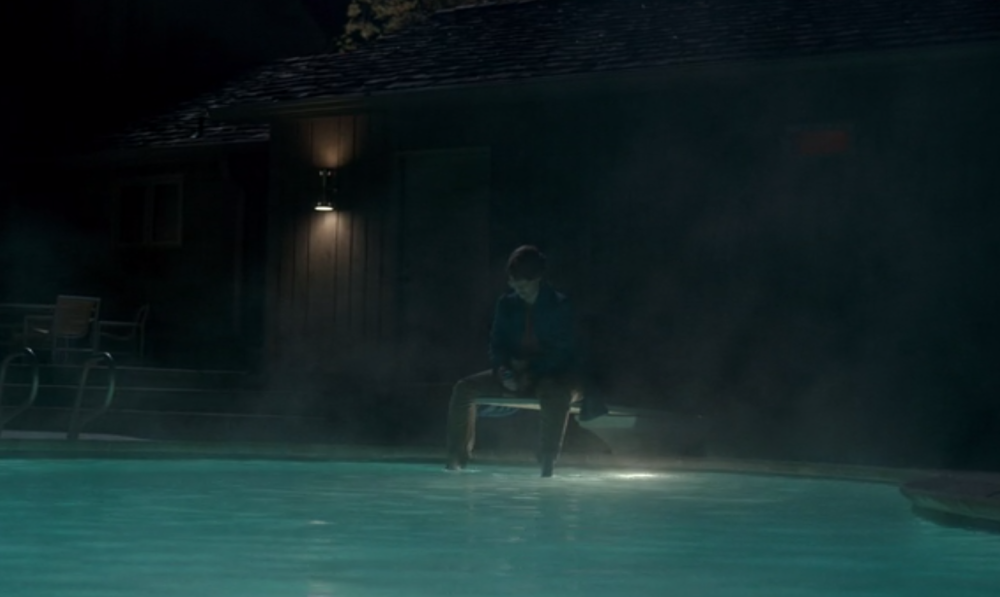 When Chuck comes to, Veronica gets him to confess to lying about his hookups, while Betty slowly turns up the heat on the hot tub. Post-confession, Veronica’s ready for Betty to take off her wig and stop sexually confusing everyone, but Betty enters just a wee bit of a dissociative state and briefly seems to think that she is Polly and Chuck is Jason. 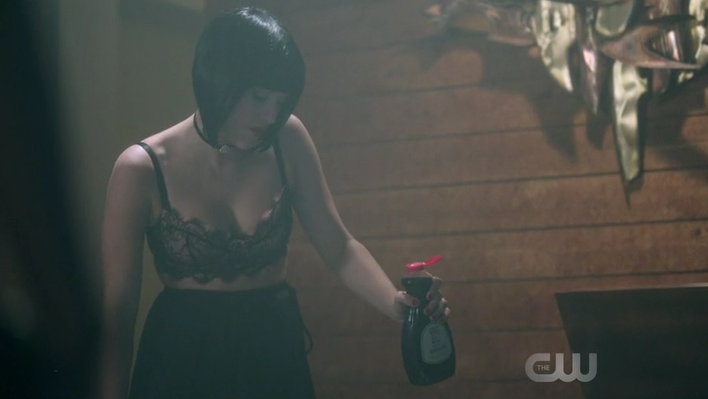 YOU SHALL DROWN IN THE BLOOD OF THE MAPLE.

Veronica finds this very alarming, but Ethel sneaks in for a peek and is nothing but thrilled. 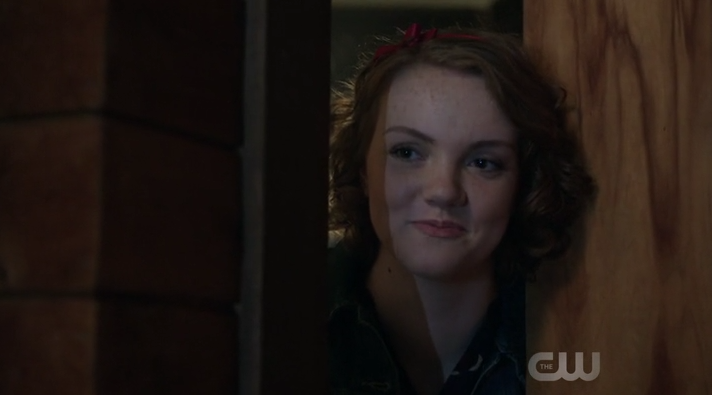 POOL PARTIES HAVE GOTTEN A LOT MORE FUN SINCE THE 80s.

In the aftermath of all this, Chuck and his cronies are forced to quit the football team, and Veronica and Betty’s friendship is firmly cemented, even as the boundaries between them are murkier than ever.

For my part, rich though this storyline is in sadomasochistic thrills, I find it a bit disquieting how quickly this show has gone from “wholesome small town” to “hot tub torture.” I’m not sure they’re leaving themselves many places left to go at this rate. And while the characters are as thrillingly lurid as the makeup they wear, they bear no resistance to real human being, much less real high school students. The Veronica-Betty drooling is fun, but neither it nor any other human connection in this show is grounded in real emotion.

That’s one way to go, I guess, but it doesn’t give queer female viewers much to hang on to. 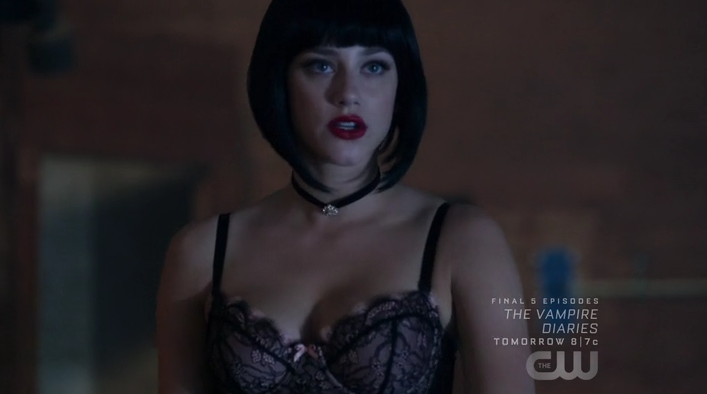 WELL, OTHER THAN THOSE.