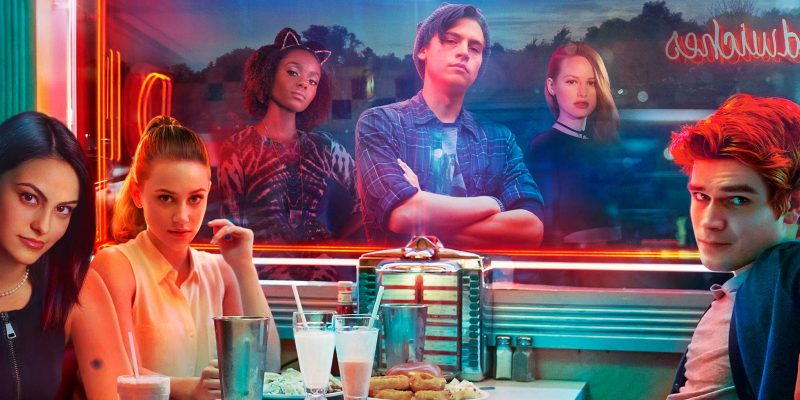 So this is definitely not how I wanted to start.

I had this whole speech I kept trying to give myself all week about how it’s ACTUALLY A GOOD THING that my first recap on my new website is for a show that was already steeped in controversy before it even premiered. But I could never really make myself believe it.

If I had my way, The Dart would enjoy a long and blissful honeymoon, celebrating universally beloved queer representation, before plunging into our first controversy. But of course, no such piece of representation actually exists. (Okay, maybe one, but I couldn’t wait until Wynnona Earp comes back to launch this website.) We deal, and will always deal, only with shows and movies as imperfect as the people who make them.

That being said, the obvious question here is “but Elaine, why would you recap a show already weighed down with so much baggage on your own website, where presumably no one is making you?” My reasons are as follows:

I announced on Twitter that I would recap Riverdale before either the “Betty and Veronica queerbaiting kiss” or “Jughead not being asexual” scandals happened, and I did it on the basis of it airing on a network whose programming choices in the past few years have been brave, bold, and feminist (Crazy Ex-Girlfriend, Jane The Virgin, Supergirl). I did it because Riverdale‘s showrunner, Robert Aguirre-Sacasa, wrote Afterlife With Archie, my favorite ever take on these characters (in which, incidentally, Jughead was a zombie). I did it because Shannon Purser, who played Barb in Stranger Things, is appearing here as Ethel Muggs, and I wanted to see more of her face (and in an admittedly illogical way, get some closure with Barb). Most importantly, I chose Riverdale, not because I ever thought it would be perfect, but because I thought it would be fun. Like Buffy was imperfect but fun. Like Pretty Little Liars used to be fun. Like, god help us, The L Word, which, if it were on today, would be the subject of RELENTLESS  (and totally deserved) criticism.

And even though I hate knowing that by choosing to write about Riverdale, I may be straining your trust in me at a time when I want to earn it, I think you would trust me less if I backed off a subject just because I knew people had strong and hurt feelings about it. Because, hey: we’re queer women talking about TV on the internet. There’s always gonna be feelings. We’re going to deal with disagreements again and again, but our community will be defined by the grace and maturity with which we do it.

ALL THAT BEING SAID, I was both entertained and irritated with the series premiere of Riverdale, and until such time as it gives us something more than “faux lesbian kissing,” I’ll probably stick with mini recaps.

And now, without further ado–though if that endless disclaimer doesn’t make this feel like home, I don’t know what will–the recap itself.

So nestled in the New Yorkish countryside is the sleepy little town of Riverdale, a place time forgot and then abruptly remembered. On the outside, Riverdale still bears many of the trappings you’ll be familiar with from the original Archie comics. The kids hang out at Pop’s Choklit Shop. Girls still cling to pom poms, and boys to footballs, as the ultimate status symbols. A red-headed teen heartthrob is pursued by a soft blonde and a sharp brunette. What makes this adaptation feel so fully realized is that it never entirely turns its back on its wholesome roots; they’re always lurking somewhere just out of reach, like a place upriver Archie and the gang are always trying to swim back to.

Which is an apt metaphor, given the way Riverdale officially marks its departure from the bright and cheery world we know. Jason and Cheryl Blossom, incestuous twin tyrants of Riverdale High, take a boat out onto Sweetwater River in the early hours of July Fourth, their intentions unclear (though Cheryl mysteriously asks Jason if he’s afraid, which would seem to indicate that their plans go beyond simple Cersei and Jaime roleplay). Hours later, Cheryl is found sobbing on the shore, telling everyone that her brother fell in the water and drowned (despite his being captain of the water polo team).

This entire galvanizing event is narrated, with a kind of noirish whimsy, by Jughead Jones, the misanthropic diner-dweller, who is WORKING ON HIS NOVEL and seems to know more about everybody’s secrets than they do. Whatever your dissatisfactions about the fact that Jughead is not aseuxual from the get-go–though Aguirre-Sacasa has said they might be building to that, and Cole Sprouse has conveyed his enthusiasm for the notion–the brooding Jughead is already tremendous fun to watch. (My favorite tidbit: asked if Jughead was a reliable narrator, Sprouse laughingly replied “he’s not a reliable anything.”)

For months, the town is in an uproar over Jason’s death, even though his body remains unrecovered, which of course made me wistfully long for the early, innocent days of Pretty Little Liars. It’s still all anyone can talk about when school comes back in session, and we at last meet the gang.

There’s Kevin Keller, Riverdale‘s gay student, who maintains some of the original character’s wide-eyed sweetness while indulging in a sharp and occasionally caustic wit.

There is Betty Cooper, whose doe-eyed gentleness makes her the strongest throwback to the original character, though she is somewhat complicated by the fact that her evil, vengeful mother shoves Adderall down her throat and commands her to join the family crusade against the evil Blossoms and all their works.

There is Veronica Lodge, the new girl in town, fleeing New York after her father was imprisoned for white collar crimes (lol show, slow down, let’s keep some realism here).

Veronica’s mom, Hermione, seems remarkably grounded for someone with a butler, but she also receives a mysterious briefcase full of cash (to which my reaction was “QUICK! HIDE IT IN A PASTA BOX!”

And of course there is Archie himself. Anyone tackling the mythology of the Riverdale High teens eventually has to answer the age-old question of why two such beautiful paragons of young womanhood are obsessed with a red-headed nobody. And the answer Riverdale has gone with is: abs.

I mean, you gotta give straight girls something.

When the show starts, Archie and Betty have been bffs forever, but Betty is ready to take things to the next level. Just as she is about to make her move, however, in walks Veronica in a literal CAPE to complete the world’s longest-standing love triangle.

However, there’s more to the story here. As it turns out, over the summer, young Archie had a run-in with HAWT Mrs. Grundy, which awakened a fire in his (presumably already fiery) loins and a song in his heart. Like literally: post-affair, Archie is now certain that he wants to be a musician.

And this, let me just say, is an AWFUL choice for the show. An adult teacher sleeping with a fifteen year-old student is WRONG whether your name is Ezra Fitz or Geraldine Grundy, and the best thing this show could do is point that out to its viewers, and then briskly walk away. I mean, I appreciate the choice not to run headlong into Beronchie (yep, that’s the throuple name we’re going with), but THIS IS NOT THE WAY.

But wait! There’s more! An illegal tryst isn’t the only secret Archie and Mrs. Grundy share. It transpires that the morning Jason died, Archie and The Grund were canoodling on the banks of the river when they heard a GUNSHOT. Despite this being a rather compelling counter-narrative to the “Jason fell in the water and drowned” story, they never told a soul. Flash-forward to the school year, Archie uses this information to blackmail Mrs. Grundy into giving him music lessons.

Meanwhile, Betty and Veronica are trying to hash out their relationship dynamics. Betty confesses both her love for Archie and the tragic story of his sister Polly, who was driven mad both by their mother and a doomed love affair with Jason Blossom. Veronica, meanwhile is straining against every HBIC impulse in her body to use all of this information against Betty, because Veronica is trying to be a good person. It doesn’t come particularly naturally, but goddammit she is giving it her best shot. Her first good deed is to try out for the cheerleading squad with Betty. Here are all of the things that make no sense about that.

1.Betty wanting to impress Cheryl Blossom in the first place, despite Cheryl’s unrelentless torture. Honestly, Cheryl has been way overdrawn as a villain, in what I can’t help but see as a bad habit of gay male writers of sucking all the humanity out of teenage girls in order to pay them a kind of horrified worship (Heathers, Faking It, Glee).

2.After pretty much botching their routine, Veronica just yells at Cheryl until she lets them on the squad. Which: that is not how tryouts work, or if it is then I have been handling job interviews very wrong for a long time.

And then there’s that kiss. At the end of their totally lackluster routine, Betty and Veronica bring it in for a “grand finale,” which consists of an awkward, forced makeout in front of the rest of the squad. Cheryl Blossom is like “puh-leaze, you might have gotten a GLAAD award for that in 1994, but we’ve moved on.” But the thing is, pointing out that you’re doing something shitty and queerbait-y doesn’t stop it from being shitty and queerbait-y. There are only two reasons to include that kiss: (1. to include it on promos 2.to defuse from the outset any possibility of the two of them hooking up) AND BOTH OF THEM ARE INSULTING. It’s a throwaway, totally contextless moment. Like, if you wanted it to have any meaning, show us whose idea it was. Show us who is using it as a power play. Show us anything beyond the tired-ass trope that girls kiss each other for attention. Fuck that kiss.  I’m not even including a picture of it in this recap, is how little I respect it.

I am way more excited about Josie and the Pussycats than I am about Betty and Veronica, but we don’t get much of them this episode beyond some (flawless) musical numbers and a long lecture about how it is NOT THEIR JOB to teach Archie Andrews musical or cultural theory.

So when Archie is unexpectedly beheaded in the season finale, the show can just go ahead and be about them.

The episode coalesces around the start-of-term semiformal, to which Archie takes both Veronica and Betty! On the dance floor, Betty finally tells Archie how she feels, but is cruelly rebuffed. Later, at Cheryl Blossom’s afterparty, she arranged for Veronica and Archie to disappear into the closet for seven minutes of heaven, during which time they predictably lock lips.

Speaking of closets, Kevin and school jock Moose Mason sneak off from the party to do what young men do when they have had enough beers to plausibly deny remembering it the next day. To prove he’s not gay, Moose says he wants to do “everything but kiss,” and honestly I would have appreciated watching the hurt of that register on Kevin’s face, rather than just seeing him smirk it off. But before anything can transpire between them, they stumble upon the body of Jason Blossom…with a bullet through his head.

In the wake of this startling discovery, Jughead’s arch narration informs us, someone is about to be arrested.

See you next week! And sorry the comment section doesn’t work yet; we are working on it!!!