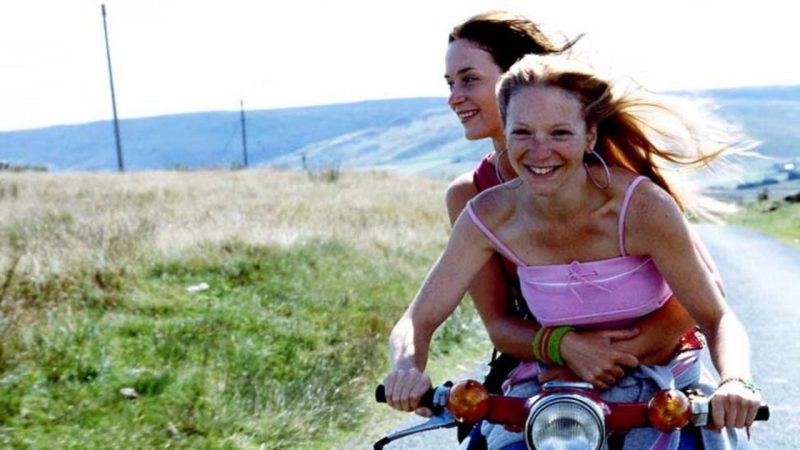 The 2004 British drama My Summer of Love is the most tragically underappreciated movie in the queer film canon. Despite gorgeous cinematography and outstanding performances by its leads (including a young Emily Blunt), MSoL is generally left out of our “oh but have you seen” conversations. There are two factors to blame for this oversight. The first is that in nearly all descriptions of the film, it describes the story as concerning a “passionate friendship” between two girls. While seasoned Netflix-scourers will read this as the gay code it is, mere dilettantes might pass over the film, believing that the two girls in question never do anything more than feverishly weave each other friendship bracelets.

But the second reason for My Summer of Love’s relative obscurity is, I believe, a flaw in our community’s understanding of what constitutes a happy ending. Specifically: we (myself included) demand that our favorite films end with the promise that the central couple will ride off into an eternal sunset, and we are satisfied with nothing less.

We are scarcely to be blamed for this blind spot. So much of what we seek out when go looking for queer storylines is comfort, hope, and escape. But occasionally, these desires blind us from films that deliver all these things, just not in the ways that we expect.

All great queer storylines are, at heart, familiar in the way they call up echoes of how you felt about some girl, and from the start, My Summer of Love boils over with the monomaniacal, overbright longing of your first adolescent obsession.  The very first scene shows us Mona (Natalie Press) scrawling a portrait of her beloved in charcoal on her bedroom wall, an act which we have all–metaphorically, if not literally–undertaken.

Mona is a working class girl in Northern England, orphaned but for her brother Phil (Paddy Considine), an ex-con determined to turn their family’s pub into an evangelical church. (It’s Phil’s summer of love too, but his overpowering crush is on The Lord.) Mona’s prospects in life are bleak. Her married boyfriend helps himself to one final shag and then dumps her. Her strange, freckled beauty is lost (both to herself and everyone else) under layers of polyester. The best metaphor for her life (which I would chastise for being too obvious if it weren’t so terribly endearing) is a rusty scooter she rides everywhere, despite the fact that it has no engine.

Until one day, when Mona is lying in a field contemplating nothing (oh sweet teenage summer nothing, will you never return?) and she is approached by a girl on a white horse (another metaphor whose beauty outshines its obviousness). The girl, of course, is Tamsin (Emily Blunt) daughter of the local aristocracy, sent home from boarding school for being “a bad influence on people.”

The two are immediately fascinated with one another. For Mona’s part, the fascination is an immediate and obvious reaction to a fairy tale creature showing up in her dreary world. Meanwhile, Tamsin’s interest in Mona is initially that of a bored rich girl looking for her next worshipper, but she soon finds a strain of wildness in Mona to rival her own. (The a-ha moment is when Tamsin tearfully complains that her father is having an affair, and Mona helpfully responds by hurling a lawn gnome through the window of Tamsin’s father’s Jaguar.)

Their investment in each other is, at first, that “passionate friendship” promised by the film’s blurbs, but eventually their desire to fuse together goes from conceptual to physical. One shy, half-joking kiss leads to another, until it becomes clear that they are both entirely serious.

Throughout, they each share their familial woes, which for Mona center on her Holy Roller brother’s endless attempts to “save” her (I was honestly unaware that that particular variety of Christianity existed outside the bible belt where I grew up, and I am deeply sorry that other countries must also tolerate people who are JUST SO PUMPED UP ABOUT JESUS CHRIST.) Tamsin, meanwhile, is deeply in mourning for her beautiful older sister Sadie, who died of complications from anorexia. At one point, the girls attempt to summon Sadie’s spirit on a Ouija board (and it’s a mark of the film’s deftness that it honestly feels like it could swerve into horror without missing a beat), and later they take some mushrooms they find in Sadie’s room (as she doubtlessly would have wanted).

Under the influence of the mushrooms they vow their eternal devotion, in one of my all-time favorite scenes. Tamsin: “If you ever leave me, I’ll kill you.” Mona: “If you ever leave me, I’ll kill you and then I’ll kill myself.” Lines that like would be simply silly if it weren’t for that familiarity I mentioned earlier. Do you remember that girl? How high she had you tuned? The thoughtless bravery with which you said “forever?” Of course you do. And you remember how spectacularly it all fell apart.

Contrary to my usual custom, I won’t give away the last few turnings of My Summer of Love’s plot, because I’d hate to rob you of the shock of experiencing it for the first time. But as the story unfolds, we begin to notice the fault lines in Tamsin’s character that Mona, blinded by youthful ardor, cannot see. Tamsin is manipulative, desperate for constant affirmation and stimulation, and in some ways, quite cruel. In these attributes, she resembles a lot young women, both fictional and real, who realize their tremendous  psychosexual power and whose first instinct is to use it as a weapon. (What makes Emily Blunt’s performance stand out is the clumsiness with which she wields it, as when she casually makes up an entire biography of Edith Piaf.) Mona hangs all her hopes on the mysterious stranger on the white horse, on fairy tales and endless summers, on things that are only real for you once. Naturally, her heart and her dreams are broken against the flawless white cliffs of Emily Blunt’s cheekbones.

And if that alone were all there was to the story, then I would say our community’s disdain of this film is justified. But it isn’t, because its two main characters are so well-drawn. Tamsin isn’t a soulless sex demon; her feelings for Mona are fleeting but they are inarguably real. Every time I watch this movie I imagine her character ten years later, looking back on the way she treated Mona with remorse.

But more importantly is Mona, who hangs on to her strangeness and her fury in spite of her heartbreak (the real tragedy of this film is that it didn’t hurl Natalie Press into the same stratosphere of fame it did for her costar). Tamsin’s great mistake is in thinking Mona is her victim, but Mona will have none of it. Love has made her stronger, made her braver, made her look in the mirror and see her own beauty. It is a vastly happier ending than these two girls packing up and running off into the sunset together. Mona gets her own sunset, goddammit, and it is enough.

One of the first acts that cements Mona and Tamsin’s bond is Tamsin going to a junkyard to buy an engine for Mona’s rusty old scooter. I think that may be just about the most helpful metaphor I’ve ever come across for your first love. You don’t get to keep the girl, but you do get to keep the engine. And it can take you anywhere.