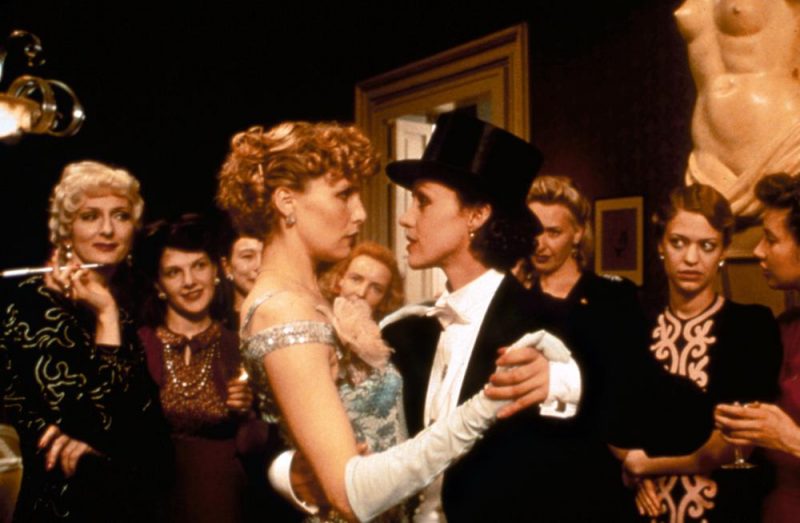 Aimee and Jaguar has been one of my most requested films since Sapphic Cinema’s inception, but it was always my position that it was off-limits. A story concerning Nazi genocide never felt appropriate to a space usually dedicated to humor.

But the rules have changed since the election, in a lot of big, obvious ways and in a thousand little, unexpected ones. Aimee and Jaguar (1999) is suddenly the only movie I can imagine writing about, because it concerns resistance to an evil regime, and queer love as a type of that resistance. It’s based on the real-life love affair between Felice Schraugenheim, a Jewish resistance fighter, and Lilly Wust, a Nazi housewife.

Given the seriousness of its subject matter, it’s fortunate that Aimee and Jaguar is one of the most polished jewels in the lesbian film canon. It has the big budget necessary for a convincing period piece, and its writing and performances are refreshingly nuanced. But in spite of its subject matter, it also manages to be quite funny, warm, and empathetic without being cloying.

So it’s 1943 Berlin. That fact alone would usually be a recipe for a grim and joyless war picture filmed in grayscale. But Aimee and Jaguar is special largely because it concerns the lives of Berliners attempting to find joy amidst the rubble. Even the brave resistance fighters have to stop and take a shower, listen to the latest record, and let some boys buy them drinks on the condition that they stay at their own table. (It feels particularly relatable since the election as we all try to negotiate when and how we will permit ourselves to relax amid the horror and struggle of Donald Trump’s incipient regime.)

In the bombed out but still decadent streets of Berlin, we meet the remarkable women at the center of our tale. And also one other woman who frankly ruins it for everyone else. There’s Klara, a model-hot queer Jewish woman living underground. (I am just now learning that the actress who plays her also plays the evil walking vagina that seduces Alan Rickman in Love Actually, and it is really throwing me for a loop.) There’s Ilse, another queer who puts her safety at risk by sheltering her Jewish friends (until they cheat on her).  And dear god, there is Felice, the Jewish lesbian resistance fighter who steals classified photographs by day, steals married women by night, and pens poetry through clouds of cigarette smoke whenever she gets a spare minute. Felice has hair the color of secrets, rocks a tux like Marlene Dietrich, and has more danger-tipped charm than every incarnation of James Bond put together. A movie that was just about the three women mentioned above would be the greatest movie ever made. Unfortunately, as happens so often with groups of amazing queer women, one of them has to go off and meet a lady who is, as Arrested Development so memorably put it: “her?”

The “her” in question is Lilly Wust, the pampered wife of a Nazi officer. Lilly–played by Juliane Kohler with a consumptive intensity reminescent of young Mia Farrow–has embraced Nazism with great enthusiasm, but not much thought, and chiefly concerns herself with raising her children and fucking dudes while her husband is off at war. She’s not that bright or interesting, so perhaps it is her status as the perfect Nazi hausfrau that makes Felice want to conquer her. Or maybe she just likes blondes.

Whatever the reason, Felice makes it her business to insinuate herself into Lilly’s life. She writes her anonymous letters professing her love, takes her to a hair salon where all her trans friends work, and lets her bask in the radiant glow of her crooked smile. This infuriates Ilse, who is hopelessly in love with Felice and superior to Lilly in every measurable way. In fact, all Felice’s friends really don’t get why Felice has to put herself in such danger by pursuing a married Nazi, when she’s already concealing her Jewish identity and working for the resistance. The danger is made clear when one of the girls is shot by the Gestapo in the midst of an otherwise ordinary day.

After a protracted courtship, Felice finally declares herself to Lilly, and they begin their affair with a sex scene that beautifully captures the terror of opening up your heart and body to another women and realizing that you are never going to be able to go back to fucking dudes again. After that, Lilly commits herself to lesbianism with a zeal that makes everyone around her roll their eyes (you knew like eight Lillys in college). Unfortunately, Lilly’s baby gay enthusiasm is a real danger to the people around her, and when she comes out to her husband (again, A GERMAN NAZI) they are less than thrilled to be roped in to her personal pride parade.

Throughout it all, Felice is gently indulgent to her true love’s foibles, though occasionally she disappears for a few days to do some resistance work and sleep around. This causes Lilly no end of heartache, because she wants to possess Felice.  When the tide of war starts turning against Germany, the hunt for Berlin’s few remaining Jews intensifies, and Felice and her friends know they must escape. But Felice just can’t tear herself away from Lilly, so at the last minute, she stays behind. (Klara, justifiably, slaps her in the face.)

It’s easy to be hard on Lilly, and on Felice’s decision to stay with her, but the two of them do find a certain amount of grace together, without which this movie would not work at all. Even when they’re hungry and feverish, they get tipsy and waltz around the living room. Even when the power goes off, they pen marriage vows by candlelight. They leave Berlin long enough to go swimming in a secluded lake, a reminder that there are still places in the world and in the heart that the war cannot touch.

But upon their return, the Gestapo is waiting in Lilly’s apartment, and they drag Felice to a concentration camp. Their brutality is heartbreaking, but what is frustrating is Lilly’s clueless, giggling romanticism in the face of it. She goes to visit Felice in the concentraation camp, which gets her sent far away. Felice does not survive the war, a victim of love and of hate, dead at twenty-two.

The entire film is framed by the unexpexted reunion of Lilly and Ilse, who end up living at the same old folks home in the 90s. Both Ilse and the film as a whole are very critical of Lilly (which is sort of surprising, given that the film is based on her memoirs and she was still alive when they made it) but in the end, they grant her a measure of forgiveness. As Ilse explains it, loving Lilly may have cost Felice the full, long life she deserved, but it gave her the moment of exquisite happiness she so desperately wanted. And it is on that note, of joy stolen in the midst of terrible times, that the film chooses to end.

The idea that queer love is intrinsically radical and queer people are intrinsically  brave and good has led to some of the laziest films in the canon. Since winning marriage equality in the US, queer filmmakers have had to wean themselves off the reliable but played-out narrative of “lesbian sex versus society.” But now it seems that our march towards progress, which briefly felt so inevitable, has been turned back by swastikas, white robes, and foes we thought we’d vanquished. Love and resistance are about to become inextricable for us once more. And so we’ll need more films like Aimee and Jaguar, that show us to be heroes while still allowing us to be beautifully, heartbreakingly human.

Sex Scenes: Two, both excellent if a bit high strung.

How Many Times Have You Seen It, Elaine?: Probably five, and it bears mentioning that I was not always as critical of Lilly as I am now. It’s just: Ilse and Klara are super hot and super cool and they’re RIGHT THERE, Felice! And yet you go with HER.