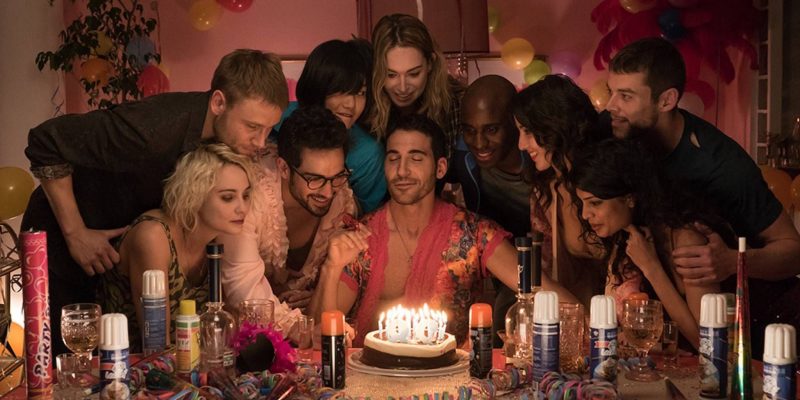 Christmas is over, but it still feels appropriate to be writing about A Christmas Special, Sense8’s return from a yearlong hiatus. For one thing, the special is a little light on the Yuletide, going more for a “year in the life” approach, with a brief stop on Christmas caroling and Nomi in a Rudolph nose. But despite that, no show carries as much Christmas spirit in its heart as Sense8, regardless of the season. It has always centered itself around holidays, marches, grand spectacles festooned with high emotion.

That’s both a compliment and critique, because this special highlights the best and worst in Sense8‘s spirit: I have deeply missed this show’s joy and optimism and technicolored romanticism during its hiatus, but they come saddled with the cloyingly new-agey philosophy and lazy sentimentality that has marred so much of the Wachowskis body of work.  I suspect Sense8‘s flaws stand out more than usual in this special because there is so little action to balance out the love-fests, but we won’t really be able to take the series’ temperature until season two, which begins in May. Until then, perhaps the best strategy is not to be too critical of our comfort and joy.

So this is a difficult special to “recap,” because not very much happens in terms of plot. It’s difficult to say when exactly the show picks up in relation to last year’s season finale, but the Sensates celebrate their August birthday in the middle of the episode, and it ends on New Years, so we cover a lot of time.

The special opens with all the sensates blissfully swimming in the Mediterranean to the tune of “Feelin’ Good” (the WHOLE song) just to let you know nothing has changed. The cruise director of this outing is Kala, who is honeymooning with Rajan and taking the rest of the gang along for the ride. For those of you keeping track at home, that brings Kala’s total contributions to the group to a grand total of two. She has taken everyone on vacation and committed an act of chemistry. One act she has not committed, however, is sex, despite having been married for weeks or months. It’s hard to tell if she’s abstaining because she fears her love for Wolfgang would be a betrayal of her husband or the other way around, but whichever it is I feel tremendously bad for Rajan. He is so kind, and so patient, and he gets a fireworks display made in the shape of her name, and all he gets for his troubles are a sprained penis. Poor Rajan. As always, Kala’s story would be mystifyingly inconsequential were it not for her ludicrous and excessive beauty, which makes me care about her even though she is pointless.

Who I really feel bad for is Doona Bae, who plays Sun. While everyone else gets to shoot their sections of the show in Mediterranean cities and on top of San Fransisco’s designated sex hill, all Doona Bae’s scenes take place in a gray and dreary prison. We catch up with Sun during a long stretch in solitary, broken only by brief visits with the rest of the group, and periodic meetings with her lawyers. Sun is having a hard time hanging out to legal counsel, because her brother keeps intimidating them away. Finally, he sends a group of thugs to kill her while in custody, but she dispatches them with an ease bordering on boredom. She also relives her first sexual experience, which was with a boy she had just defeated in single combat, which strikes me as the only correct way to do straight sex. I privately believe, though, that Sun is bi, because she is vibing super hard with one of her cell mates (she drew a portrait of Sun’s dog!) and when she is finally released from solitary they totally have a moment.

And then of course there’s Lito, for whom I have an undeniable soft spot, partly because we are something alike (I too am a swarthy gay movie star).  Lito’s storyline gives us the best and the worst scenes of the whole special. Best: when the sexy photos of Lito and Hernando hit the internet and Hernando gives an impassioned defense of the images, stating that “art is love made public.” Worst: when Lito goes home to find that the word “faggot” has been spray painted outside his apartment building, which gives rise to all the sensates seeing their personal trigger words on display. Will sees “pig,” Kala sees “virgin,” Riley sees “slut” (even though a far worse insult would just be “dj”), Wolfgang sees “Nazi,” and Capheus sees the n word. That moment is guilty of the kind of simplistic overreach Sense8 has always narrowly avoided, in equating each characters’ problems with all the others. The thesis of universal connectivity is beautiful but cannot be confused with universal sameness. That’s the trap the Wachowskis fell in with Cloud Atlas and its notorious yellowface. I would hate to see them repeat the same mistake here. Back to the plot, though, Lito, Hernando, and Daniela escape to Lito’s mother’s house for Christmas, where is she is (almost boringly) tolerant and accepting of her son’s partner and the weird chick they inexplicably continue to let hang around.

Fortunately, the Christmas special combines two of the sensates’ storylines into one, which I appreciate because it will make recapping go faster in the future. Riley and Will are now on the run from Whispers together, with Riley keeping Will in a constant heroin haze to make him harder to track. In his brief moments of lucidity, Will is wracked with guilt at having abandoned his father, and is overcome with self-loathing at his uselessness to the cluster and his dependency on drugs. Riley attempt to cheer him up with dancing and ice skating, but for the sake of plotting, they’ll have to figure out a new way to help him soon.

Finally we have Wolfgang, the only one of the sensates to whom much happens at all during the course of these meandering two hours. Wolfie’s murder of his uncle left a large vacuum in Berlin’s criminal community, which some of the other kingpins are eager to see him fill. Wolfgang, predictably, is reluctant to step up, because he hates doing anything that anyone else wants him to do. (Remember when he was like “Kala, I love you” and she was like “OMG me too!!” and he was like “Get away from me, I’m disgusting.”) His life becomes even more difficult to negotiate when Felix emerges from his coma and proceeds to offend everyone in shouting distance. I mean, don’t get me wrong, I love Felix, but that dude is gonna get shot again if he doesn’t learn to shut up.

In spite of the intrigue swirling around him, the most interesting thing Wolfgang does all episode is brood about how Kala is his one true love, and then procede to fuck his Tindr date right in front of her. I was so confused and distracted by that behavior that it’s still not clear to me what happens on New Year’s Eve, when the episode ends in a hail of bullets. Best as I can understand: Wolfgang and Felix are at a gangster’s NYE party, but really it’s just a cover for the gangster to murder all his rivals. Felix, Wolfgang, and the rest of the cluster manage to fight off the henchmen, but the other sensates are clearly NOT HERE for Felix’s criminal shit dragging them away from their own evenings. Which: the darkest, broodiest, and most violent member of the cluster being isolated from the rest would be a really strong direction for the show to go next season. Here are my hopes for what happens to the rest of the gang.

Capheus: Find some way for his van business to be tied into the Whispers storyline, probably through the drug-smuggling ring.

Will: Use this downtime to critically interrogate whiteness and policing in America, and his role therein.

Sun: Follow Bea Smith’s lead and fall in love with another prisoner. (And then follow that lead no further.)

Lito: Consider putting some pants on at some point. (I apologize to all the people this proposal offends.)

Nomi: GIVE AMANITA WHATEVER THE FUCK SHE WANTS TO STAY WITH YOU. SEX PICNICS, CHARITY CHRISTMASES, WHATEVER. MAKE IT WORK.

Kala: Honestly just fuck your husband. I get that it’s antifeminist and transactional, but he made a fireworks out of your name.

I very much look forward to picking the plot back up with all of you in May.